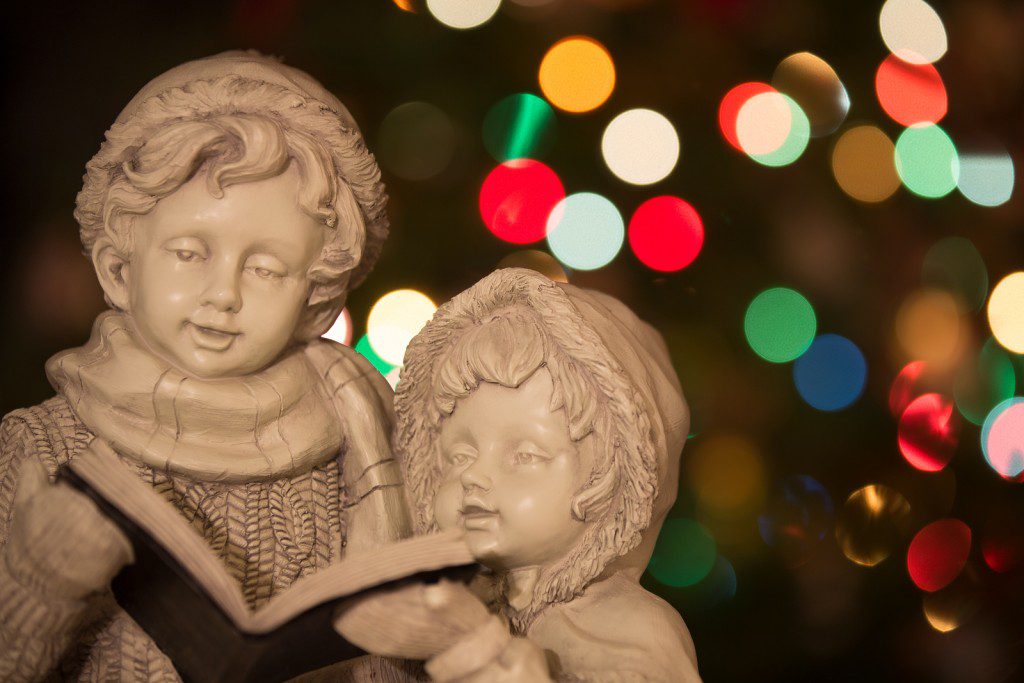 When You Hear Carolers Who Sing Off-Key

Many years ago, I was invited to sing with a men’s chorus from Utah State University at a session of general conference of The Church of Jesus Christ of Latter-day Saints.  There were no auditions.  Those who were willing to rehearse and to travel to the meeting were welcomed.

While we performed, I had what I considered to be the misfortune to be seated next to a young man who sang every word triple fortissimo and never came within a light year of the right note.  I thought it was awful that he should sing so loudly when he sang so poorly, and felt certain that I was making a more valuable contribution to the spirituality of the meeting than he was.  It was some time later when I realized the enormity of my mistake.

I think I began to understand my error when I read this:

Alexander Schriener . . . recalled a story about someone who asked a music director how he could stand to hear Brother Stanton bellow off-key at church gatherings.  The wise old leader replied, “Brother Stanton is one of our most devout worshippers, and when he bellows he is a supreme musician . . . Don’t pay too much attention to the sounds he makes.  If you do, you may miss the music (Music and the Gospel, p. 16; cited in Ensign, March 2000, p, 19).

For at least one session of that general conference I missed the music. I have since come to believe that music is much more about the feelings of the heart than the quality of the harmonies.  The Lord gave these instructions:

I love the idea of religious music as a joyful noise.  That is exactly what I was hearing from my tone-deaf singing companion that day in the Tabernacle. The phrase joyful noise is used seven times in the Psalms in describing the sweetness of singing praises.  We ought to make a lot of “joyful noise to the rock of our salvation” (Psalm 95:1).

The Lord said this to Emma Smith:

For my soul delighteth in the song of the heart; yea, the song of the righteous is a prayer unto me, and it shall be answered with a blessing upon their heads (Doctrine and Covenants 25:12).

This verse says nothing about the song of the vocal cords.

I believe that is what turns a song into a prayer.  It is the motivation for music that Alma mentions three times in the Book of Mormon.

And again I ask, were the bands of death broken, and the chains of hell which encircled them about, were they loosed?  I say unto you, Yea, they were loosed, and their souls did expand, and they did sing redeeming love.  And I say unto you that they are saved (Alma 5:9, emphasis added).

It must be the desire to sing redeeming love that turns a song into a prayer.

And now behold, I say unto you, my brethren, if ye have experienced a change of heart, and if ye have felt to sing the song of redeeming love, I would ask, can ye feel so now? (Alma 5:26).

Behold, how many thousands of our brethren has he loosed from the pains of hell; and they are brought to sing redeeming love, and this because of the power of his word which is in us, therefore have we not great reason to rejoice? (Alma 26:13).

The scriptures have a great deal to say about making a joyful noise.  Here are some examples:

Let the word of Christ dwell in you richly in all wisdom; teaching and admonishing one another in psalms and hymns and spiritual songs, singing with grace in your hearts to the Lord (Colossians 3:16).

And the graves of the saints shall be opened; and they shall come forth and stand on the right hand of the Lamb, when he shall stand upon Mount Zion, and upon the holy city, the New Jerusalem; and they shall sing the song of the Lamb, day and night forever and ever (Doctrine and Covenants 133:56).

And he hath brought to pass the redemption of the world, whereby he that is found guiltless before him at the judgment day hath it given unto him to dwell in the presence of God in his kingdom, to sing ceaseless praises with the choirs above, unto the Father, and unto the Son, and unto the Holy Ghost, which are one God, in a state of happiness which hath no end (Mormon 7:7).

Thy dead men shall live, together with my dead body shall they arise.  Awake and sing, ye that dwell in dust: for thy dew is as the dew of herbs, and the earth shall cast out the dead (Isaiah 26:19).

And help us by the power of thy Spirit, that we may mingle our voices with those bright, shining seraphs around thy throne, with acclamations of praise, singing Hosanna to God and the Lamb! And let these, thine anointed ones, be clothed with salvation, and thy saints shout aloud for joy.  Amen, and Amen

Elder Russell M. Nelson taught us the true purpose of congregational music in the following quote:

The song of the righteous is a prayer unto the Lord (see D&C 25:12). Some members seem reluctant to sing, perhaps because of fear. Help them to forget themselves and sing as an opportunity to praise their creator prayerfully. Music in Sacrament Meeting is for worship, not for performance (Ensign, August 2004).

At least twenty times in the scriptures, we are directed to “sing praises” to the Lord.  May we lift up our voices and make a joyful noise this Christmas season as we praise Him with songs of redeeming love.  It will not matter if the Lord cannot hear the harmonies and melodies in our voices.  He will certainly hear the music that is in our hearts.

I often feel that ward choirs are so small because some members are too humble to share their talents, and others have been encouraged not to. The Lord doesn't expect every hymn of praise to be worthy of a MoTab album. Indeed, in Psalm 100:1 we are all told to: "Make a joyful noise unto the Lord, all ye lands." I believe that what is in our heart is far more important than the musical gifts that we may (or may not have) been blessed with. I love singing the hymns of the Church, even along side of someone who is apparently tone deaf.

I loved this article! I've often said, "The scriptures say 'Make a joyful noise unto the Lord.' There's nowhere that it says, 'Thou shalt sing on key.'" I'm one who struggles to hit the right notes, although I love to sing. With my love of music in spite of my not so great voice I have served as Primary music director, Relief Society chorister, and even Sacrament Meeting chorister. I'm grateful for the opportunities that I am given to share my love of singing. I appreciate it when the talented singers around me are encouraging, like when a friend with a beautiful voice whispered, "You did that whole verse on key!" Other comments have been not so kind, and although I forgive ward members who made them, it's hard to forget the sharp words of someone to whom good singing comes naturally and doesn't understand how hard I'm trying or how much I love to sing in spite of my shortcomings. I hope this article will help more people to remember that we're doing the best we can and we're praising the Lord. If you must say something, please make it something encouraging or helpful. I wish there were a singing class in church! In school, all singing classes were filled by audition, which meant that the good singers had every opportunity to become great singers, but those with no particular talent never had a chance to learn.