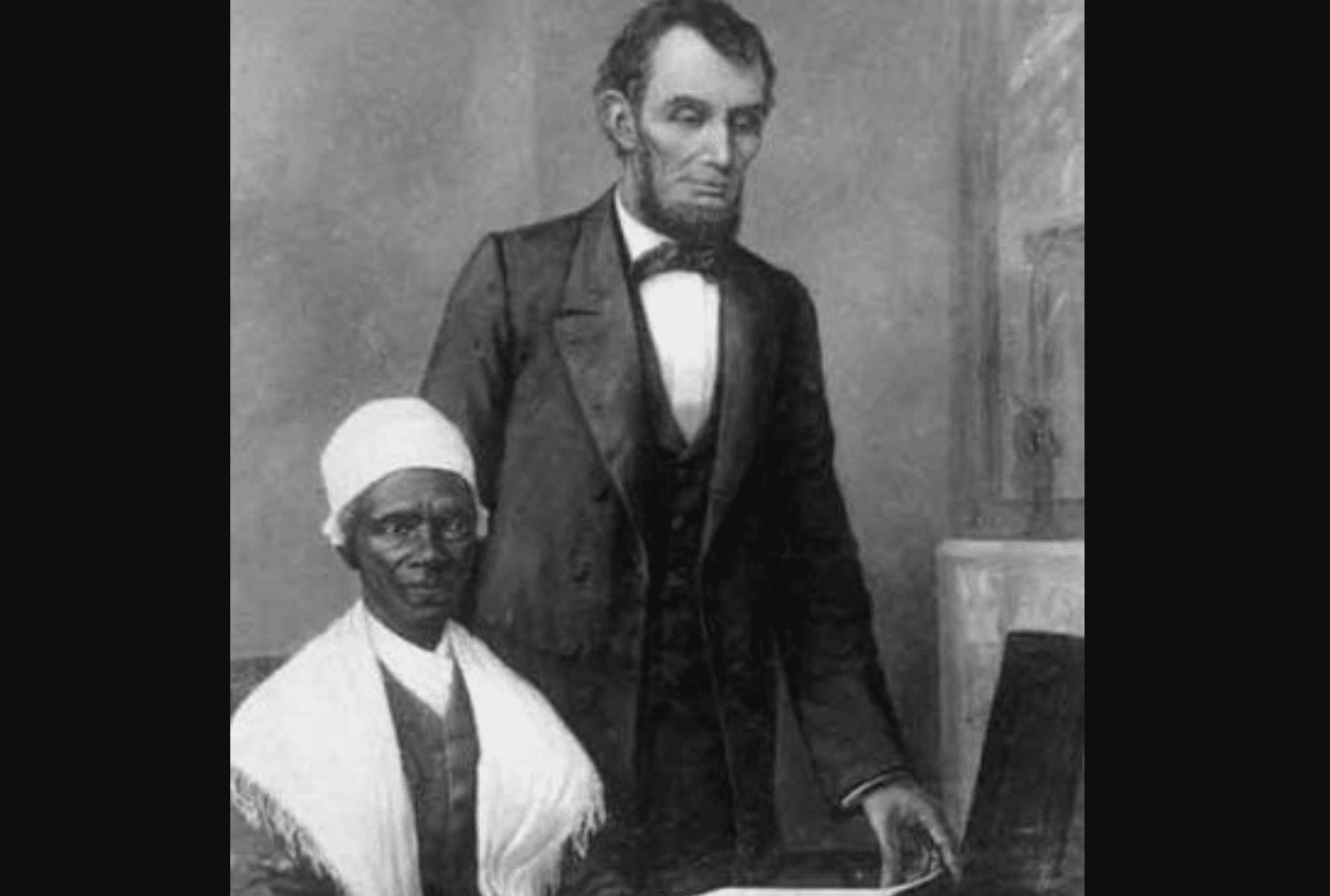 Editor’s Note: In honor of Abraham Lincoln’s February 12th birthday, we wanted to share this interesting episode from history that speaks to his character.

Abraham Lincoln’s White House was busy with citizens seeking favors for themselves and others, but on Oct, 29, 1864, he had a remarkable visitor. Sojourner Truth was the most renowned African-American woman of the 19th century, and she had come all the way from Battle Creek, Michigan, because she wanted to thank the president for emancipating the slaves.

She had become well known in part for her gift of persuasive speech. At the Akron, Women Convention in 1851, when a man spoke of the physical weakness of women, she held the convention spellbound with her speech that has now become so familiar. “I have plowed and planted, and gathered into barns, and no man could head me—and ain’t I a woman? I could work as much and eat as much as a man—when I could get it—and bear the lash as well! And ain’t I a woman? I have borne thirteen children, and seen most all sold off to slavery, and when I cried out with my mother’s grief, none but Jesus heard me! And ain’t I a woman?”

Her grit had been indispensable. She had been emancipated in 1827 as a result of a New York law passed a decade prior, but several of her children remained in bondage, including a son, Peter, who was sold illegally to a slaveholder in Alabama. She took what would be almost an impossible course for a woman in her position, and sued the man who sold her son, won in court, and Peter was returned to her free of the obligations of slavery.

Through Truth was illiterate, she dictated this narrative about her meeting with Lincoln:

Upon entering his reception room we found about a dozen persons in waiting, among them two colored women. I had quite a pleasant time waiting until he was disengaged, and enjoyed his conversation with others; he showed as much kindness and consideration to the colored persons as to the whites — if there was any difference, more. One case was that of a colored woman who was sick and likely to be turned out of her house on account of her inability to pay her rent. The president listened to her with much attention, and spoke to her with kindness and tenderness. He said he had given so much he could give no more, but told her where to go and get the money, and asked Mrs. [Colman] to assist her, which she did.

The president was seated at his desk. Mrs. C. said to him, “This is Sojourner Truth, who has come all the way from Michigan to see you.” He then arose, gave me his hand, made a bow, and said, “I am pleased to see you.”

I said to him, Mr. President, when you first took your seat I feared you would be torn to pieces, for I likened you unto Daniel, who was thrown into the lion’s den; and if the lions did not tear you into pieces, I knew that it would be God that had saved you; and I said if he spared me I would see you before the four years expired, and he has done so, and now I am here to see you for myself.

He then congratulated me on my having been spared. Then I said, I appreciate you, for you are the best president who has ever taken the seat. He replied: ‘I expect you have reference to my having emancipated the slaves in my proclamation. But,’ said he, mentioning the names of several of his predecessors (and among them emphatically that of Washington), ‘they were all just as good, and would have done just as I have done if the time had come. If the people over the river [pointing across the Potomac] had behaved themselves, I could not have done what I have; but they did not, which gave me the opportunity to do these things.’ I then said, I thank God that you were the instrument selected by him and the people to do it. I told him that I had never heard of him before he was talked of for president. He smilingly replied, ‘I had heard of you many times before that.’

He then showed me the Bible presented to him by the colored people of Baltimore, of which you have no doubt seen a description. I have seen it for myself, and it is beautiful beyond description. After I had looked it over, I said to him, This is beautiful indeed; the colored people have given this to the head of the government, and that government once sanctioned laws that would not permit its people to learn enough to enable them to read this book. And for what? Let them answer who can.

I must say, and I am proud to say, that I never was treated by any one with more kindness and cordiality than were shown to me by that great and good man, Abraham Lincoln, by the grace of God president of the United States for four years more. He took my little book, and with the same hand that signed the death-warrant of slavery, he wrote as follows:

As I was taking my leave, he arose and took my hand, and said he would be pleased to have me call again. I felt that I was in the presence of a friend, and I now thank God from the bottom of my heart that I always have advocated his cause, and have done it openly and boldly. I shall feel still more in duty bound to do so in time to come. May God assist me.

In the painting of Sojourner Truth and Abraham Lincoln, they are examining a Bible, given to Lincoln on Sept. 7 1874, not long before Truth’s visit and described in The Daily Morning Chronicle of Washington:

Yesterday afternoon a Bible was presented, on behalf of the loyal colored residents of Baltimore, by Revs. A. W. Wayman, S. W. Chase, and W. H. Brown, and Mr. William H. Francis, to President Lincoln. The members of the committee were introduced by Mr. S. Mathews, of Maryland, and individually welcomed by the President. This ceremony having been concluded, Rev. S. W. Chase addressed the President as follows:

“Mr. President: The loyal colored people of Baltimore have entrusted us with authority to present this Bible as a testimonial of their appreciation of your humane conduct towards the people of our race. While all others of this nation are offering their tribute of respect to you, we cannot omit suitable manifestation of ours. Since our incorporation into the American family we have been true and loyal, and we are now ready to aid in defending the country, to be armed and trained in military matters, in order to assist in protecting and defending the star-spangled banner.

“Towards you, sir, our hearts will ever be warm with gratitude. We come to present to you this copy of the Holy Scriptures, as a token of respect for your active participation in furtherance of the cause of the emancipation of our race. This great event will be a matter of history. Hereafter, when our children shall ask what mean these tokens, they will be told of your worthy deeds, and will rise up and call you blessed. “The loyal colored people of this country everywhere will remember you at the Throne of Divine Grace. May the King Eternal, an all-wise Providence protect and keep you, and when you pass from this world to that of eternity, may you be borne to the bosom of your Saviour and your God.”

Thank you for this article in particular but also for the other many inspiring articles. Wish I knew how to get this to the youth. All they hear from the propaganda machines is negativity and hate.

Tender account beautifully told. Thanks so much for sharing recollections of this Great Man. Oh that we had more Lincolns . . . .