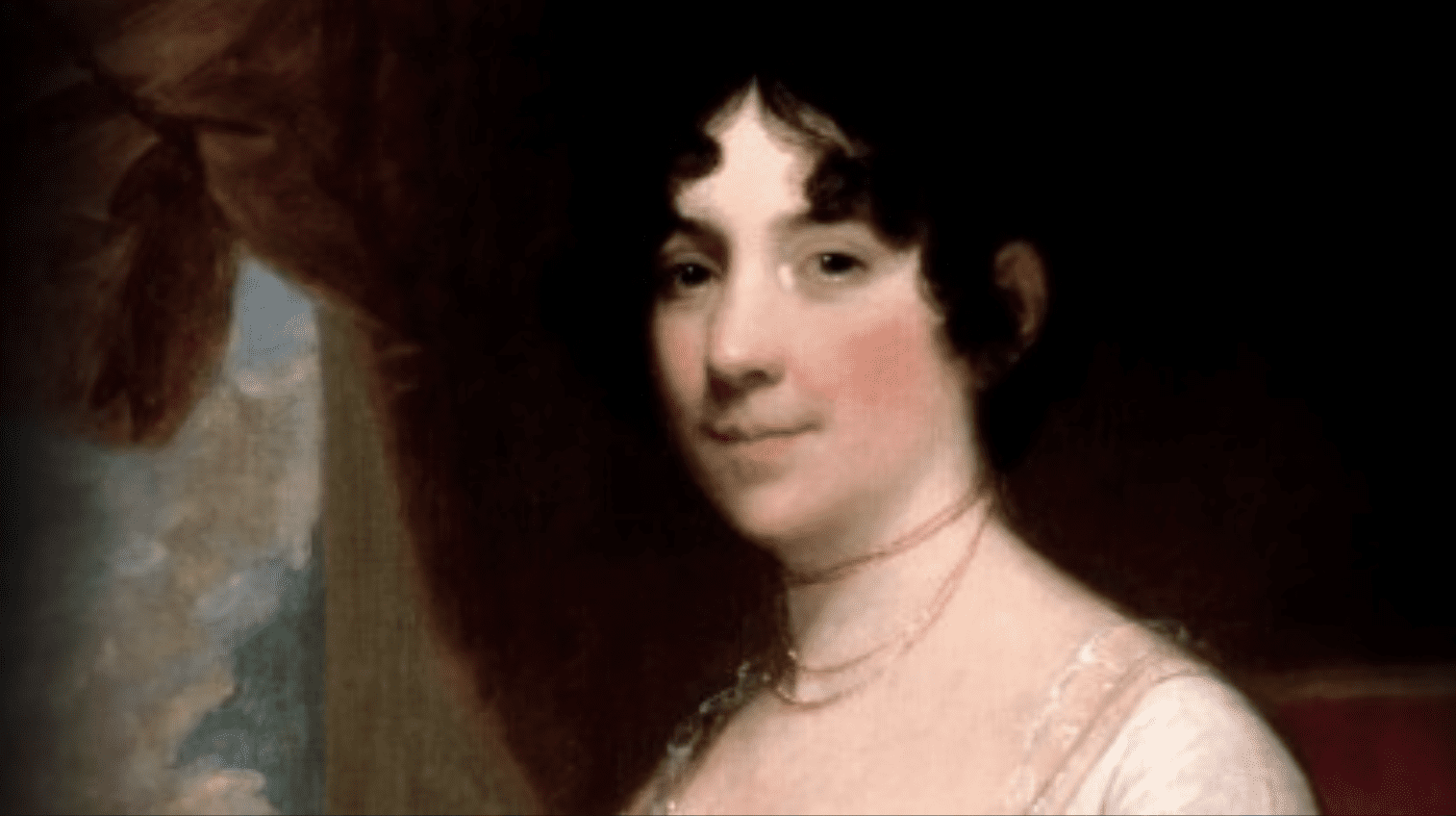 CLICK HERE to get your copy of Rodney K. Smith’s book, James Madison: The Father of Religious Liberty.

Dolley Madison exemplified the neglected civic virtue of charity, during her service as America’s first, First Lady. She was the quintessential “help meet,” a true equal to her husband, President James Madison. Together, James, America’s greatest lawmaker, and Dolley, arguably the greatest woman in the founding era, led America through the Second War of Independence and its perilous first generation. They did so by responding to incivility with charity, a virtue that Dolley brought to the White House and her unlikely marriage to James.

A recent survey by The Associated Press-NORC Center for Public Affairs Research found that approximately 3 out of every 4 of Americans believe manners and civil behavior have been deteriorating in the United States over the past several decades.  Dr. Thomas G. Plante, writing in Psychology Today, adds, “Sadly, we seem to be living in an increasingly uncivil community. From presidential politics to random internet comments, there seems to be more and more rude, demeaning, insulting, and aggressive language and behavior in our society.” Julia Unwin, who has studied declining civility at the global level, sees a clear connection between charity and civility: “As a society, we appear to have lost the instinct for kindness and the willingness to extend the hand of friendship. The generosity of spirit which allows for kindness, and politeness, that embraces difference without fear, and that genuinely sees an equality between people.” Julia Unwin is teaching a sublime truth – there can be no civility or true equality without charity.

Every virtue and talent has its roots in charity, a pure form of love for God, one’s neighbor, and one’s self. Paul was certainly not alone teaching that pure love is the ultimate virtue. In the Hadith, Mohammad declared, “Charity extinguishes sin, just as water extinguishes fire.” The poet Henry Wadsworth Longfellow also captured the essence of charity – “The life of a man consists not in seeing visions and in dreaming dreams, but in active charity and in willing service.”

At a time when America was fracturing internally along partisan lines and was being threatened externally, Dolley Madison stepped on the national scene. From her earliest days as a young Quaker, when she learned about charity and equality, and throughout her remarkable life of service, Dolley’s love for others was delivered with unfeigned warmth and caring, driving her to act civilly toward others, friends and foes alike. She endured vicious and untruthful attacks on her personal life and responded to every attack with kindness, opening her unpretentious heart and the door of the White House to all. It is little wonder, therefore, that Dolley Madison earned the love and respect of the American people and left the White House as the most revered woman in America.  Years later, a grateful Washington honored her with the largest parade in the history of the Capital on her death.

Dolley’s civility bred of a charitable nature helped hold America together through an unpopular war and a time of vicious internal partisanship, even aiding in avoiding efforts on the part of the mercantile northern states to secede from the United States, defeating external threats and overcoming vicious internal partisanship that threatened the new nation and its remarkable gift of the constitutional rule of law. Through it all, Dolley was also a noble but ever equal “help meet” to her husband.

As Eve (woman) was a “help meet” to Adam (man), Dolley was a help meet to James. According to Strong’s Concordance, in Hebrew, the term ezer means helper and azar or help, in turn, is rooted in “to surround – Protect or aid – help, succor.” In her essay, “Eve as a ‘Help Meet’ – What Does That Mean?,” in Meridian Magazine, Diane Webb reflects on the meaning of help meet, ezer kenegdo in Hebrew, and concludes,  “As I studied the definitions of these Hebrew words, I decided that they actually meant something very different from the way I had understood them for years.  When God decided to create another creature so that man would not be alone, he did not merely make a helper for him — he made an equal partner.” Webb adds, “Etymological evidence indicates that ezer originally had two roots, one ‘-z-r meaning ‘to rescue,’ ‘to save,’ and the other g-z-r meaning ‘to be strong,’” and concludes that, “God created woman to be an equal partner to her husband, exactly corresponding to him in every way. . . [M]en and women are . . . considered to be equal partners in the eyes of God.”

Dolley personified this strong, egalitarian view of what it means to be a help meet. She was her husband’s equal partner, drawing on his strengths and tempering his weaknesses. Her talents and strengths complemented James’s gifts in wondrous ways that helped save America from itself and enemies abroad. Her courage while Washington burned is legendary and stands as proof that pure love (charity) casts out all fear.

She also brought civility and charity to the White House, helping her husband overcome prior impediments associated with his sometimes strident and partisan leadership of the Democratic-Republican Party. She counseled with him, as an equal, cared for him when he was deathly ill during a critical stage of the War of 1812 (as he had cared for her when she was at death’s door just months before), and helped organize and edit his papers, which are America’s greatest written record of Constitutional Convention and the founding era.

Most contemporary Americans believe that women and men are equals and should be recognized for their individual strengths. Focusing on individual strengths, sometimes in an almost divisive way, without recognizing that women and men must be help meets – helping each other to prepare to meet God, who is the perfect embodiment of pure love – is less than half the picture.

Tragically, in our rush to extol individual strengths we may be discounting the most significant virtue, the one that never fails and that is the cement that binds every meaningful relationship – charity. Charity makes any relationship (1+1) equal (3) or more than the sum of its parts. Dolley taught James much about charity and America was the beneficiary. Together, they used that charity to forge civility and protect a nation conceived in liberty and the constitutional rule of law. They admiringly became best known simply as “The Madisons.”

Americans today believe that civility is declining, and it is. What we may fail to realize, however, is that the real root of civility is charity, the love of others and that the highest form of charity is a couple serving in unison. No American who seeks the pure love of Christ would ever yield to the urge to attack others for their differing views or to extol her or his strengths over those of another. As Dolley taught by example, if we really love others, we will be civil. To reclaim civility, we need to be honest with ourselves and realize that the true antidote to incivility is charity, a genuine caring for others. Furthermore, as Dolley and James taught by example, becoming help meets, a loving couple, is charity in its highest form.

Rodney K. Smith directs the Center for Constitutional Studies at Utah Valley University and is the author of JAMES MADISON: The Father of Religious Liberty (Cedar Fort 2019) and DOLLEY AND JAMES MADISON: An Unlikely Love Story That Saved America (forthcoming in early 2020)

I love this statement: "No American who seeks the pure love of Christ would ever yield to the urge to attack others for their differing views or to extol her or his strengths over those of another." A real help to civility! Thank you.

More specifics on Mrs Madison would have been nice. I’m sure the article is meant to be a teaser for the book, but *how* Mrs Madison complemented her husband, *how* she was gracious under personal attacks, would have been a nice way to demonstrate all that etymology of what helpmeet means. As someone whose girlhood hero was Dolley Madison, I was hoping for more.