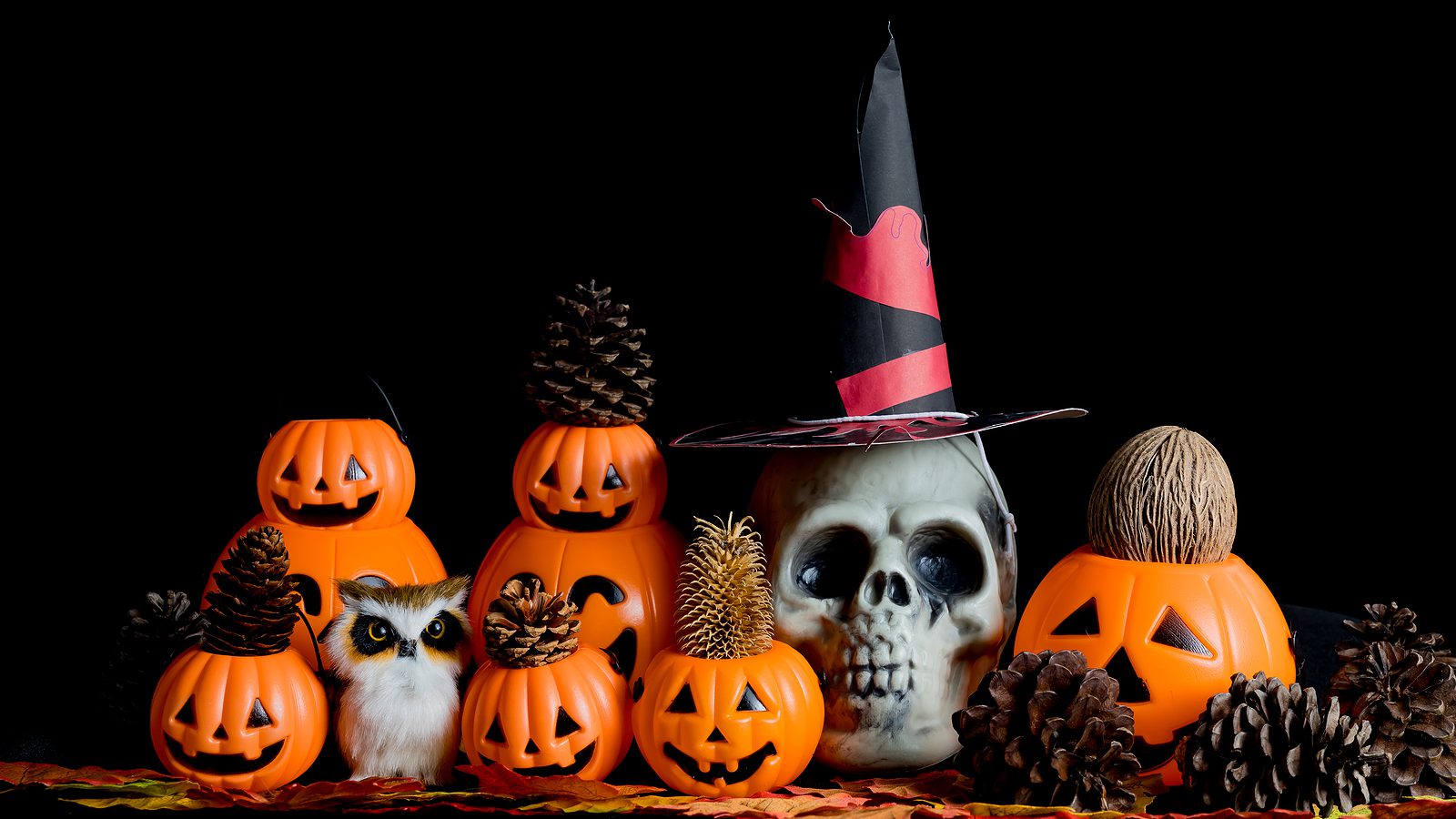 Ways of Remembering the Dead

Between 7 March and 17 October 1954, the late Hugh Nibley delivered a series of brilliant weekly lectures on KSL Radio under the title “Time Vindicates the Prophets.”  Later that same year, those thirty lectures were published in book form as “The World and the Prophets.”  Eventually, two more chapters were added, and the book went through various printings.  Perhaps because of its origins in a broadcast lecture series for a popular audience, “The World and the Prophets” remains one of Nibley’s most accessible books, and I think it one of his best and deepest.
One of its relatively brief chapters—“Two Ways to Remember the Dead”—seems particularly relevant as we in the United States and elsewhere prepare to celebrate the holiday of Halloween.  In the opening sentence of his lecture, though, Professor Nibley was thinking of a different holiday:

“On Memorial Day we think of our dead and put flowers on their graves.  Is there anything more we can do?  Many like to think that the dead enjoy a kind of continued existence by living in our memories.  That is a kindly sentiment, but more depressing than exhilarating. . . .  To think constantly of the dead is morbid; to think of them occasionally is nice—but a poor sort of immortality.”

Many years ago, when I was an undergraduate at BYU before my marriage and even before my mission, several of us drove down from Provo to perform ordinances at the Manti Utah Temple—which, now as then, ranks among my favorites.

One of the girls who went with us was a convert from California.  She had never before entered a temple, but she was able to receive vicarious baptisms on behalf of the dead.

Afterwards, I asked her how she had enjoyed her time in the temple.  I wasn’t expecting her response:  She was enormously relieved.

She had said nothing to indicate that she was nervous or afraid, but she had been.  With all of the talk about doing temple work “for the dead,” she had been expecting something dark, grim, even ghoulish.  The brightly lit interior of the temple, the workers and patrons dressed in white, the kindliness with which she was treated—typical of temple workers everywhere, but especially focused on her when the temple workers learned that she was a recent convert visiting the temple for the very first time — all of these were a joyous revelation to her.

Unfortunately, for many centuries our society fostered a dark image of death, redolent of befogged old cemeteries and eroding gravestones leaning in every direction.  And, to some extent, it has continued to do so, through ghost stories of all kinds (including those by authors ranging from  Henry James and Charles Dickens to Stephen King).  It’s not hard to imagine why, of course, but Hollywood cultivated that dark image very effectively with the classic horror films of such vintage actors as Bela Lugosi, Boris Karloff, and Vincent Price.

“What could be more depressing,” wrote Professor Nibley, “than the old-fashioned churchyard with its shadowy vaults; its seeping damp and odor of decay; its aged, mossy stones; its weeping willows and drooping plumes: in short, all those fixtures of the cult of the dead which seem like nothing so much as desperate devices to tie the dead to this world and keep them always within call.  This Gothic view of death, this obsession with the grisly remnants of the body, is not a healthy thing.”

In the United States, at least, the approaching holiday of Halloween furthers the same image.  Already, ghosts and skulls and skeletons and upright gravestones adorn many American houses.  It’s true, of course, that hordes of ballerinas, superheroes, witches, Disney princesses, ninjas, and dreadful pirates will soon be at our doors demanding candy.  But also well represented among them, as always, will be a large number of ghosts, vampires, skeletons, zombies, and ghouls.

Halloween launches the holiday season, which is just one of the reasons why American children everywhere eagerly anticipate it. Some adults, however, regard the holiday as a glorification of darkness and evil, and it’s certainly understandable why they do.

Perhaps, though, I can help.  The word “Halloween,” or “Hallowe’en,” dates to about 1745. It’s a contraction of “All Hallows’ Eve,” and it denotes the evening before the Western Christian feast of All Hallows’ Day (i.e., “All Saints’ Day”)—a time, in the Catholic calendar, for remembering the dead, particularly saints, martyrs, and departed Christian believers. (It’s akin to the Jewish “Yizkor” prayer and the Hindu period of “Pitru Paksha.”)

Many Halloween customs may have originated as ways of mocking the power of death. (“O death,” taunted the apostle Paul at 1 Corinthians 15:55, “where is thy sting? O grave, where is thy victory?”) By dressing up as fearsome creatures who prove, in fact, to be completely harmless, Christians could mock the devil, who had been defeated by Jesus Christ’s Atonement and Resurrection.

All Saints’ Day became a Christian holiday in A.D. 609, although it was originally celebrated on May 13. By the end of the twelfth century, all of Europe observed it. Churches rang their bells, and criers dressed in black paraded in the streets, summoning others to pray for the deliverance of the souls in Purgatory. (Act 2, Scene 1, of Shakespeare’s “Two Gentlemen of Verona” recalls the sound of “a beggar at Hallowmas.”) Skulls and skeletons were commonly depicted as reminders of death and the transience of human life. “Soul cakes” were baked and distributed in memory of all christened but departed souls, which may suggest a possible origin for the treats given out at Halloween.

In 835, though, Pope Gregory IV changed the date of All Saints or All Hallows to November 1. Some readers will be familiar, in this connection, with the common Hispanic observance—mostly in Mexico and in places influenced by Mexican culture—of the “Dia de los Muertos” or “Day of the Dead,” which is celebrated on 1-2 November.

Because of that revised date and for several other reasons, many scholars connect Halloween with the ancient Celtic late-autumn festival of “Samhain” (pronounced “SAH-win”), which was celebrated in Ireland, Scotland, Wales, and the Isle of Man from sunset to sunset on 31 October and 1 November. The most important of the four “quarter days” of the medieval Gaelic calendar, Samhain marked the end of the harvest, the bringing of cattle — the main form of wealth in ancient Gaelic society — down from their summer pastures, and the coming of winter, the “darker half” of the year. Samhain was a time when fairies and spirits were thought to be particularly active, and when, the doorway to the other world having been opened, they could most easily enter ours. The souls of the dead revisited their homes at Samhain.

In the sixteenth century, costumed or disguised people celebrating Samhain went house-to-house, often reciting verses or singing songs in exchange for food. In Scotland, youths went from door to door on 31 October, sometimes threatening mischief if they weren’t properly received. (Think of the Halloween greeting “Trick or treat!”) They may have represented malevolent spirits, perhaps the spirits of approaching winter, and they seem to have carried hollowed-out turnips as lanterns.

Massive Irish and Scottish immigration to the United States during the nineteenth century brought Halloween customs to America, and, relatively soon, having generally been stripped of their religious elements, they became popular across all regions and faiths. American pumpkins were larger and easier to carve than turnips, so celebrants of Halloween adapted. Today’s costumes are likely to come from Hollywood depictions of Dracula, the Mummy and Frankenstein’s monster — as well as from Disney films and the Star Wars movies.

During the English Reformation, when many Protestants began to abandon and to attack the Catholic concept of Purgatory, All Hallows’ Eve, too, came under assault. If there were no souls in transition from this world through Purgatory to the next, they reasoned, then any ghosts who returned on Halloween must actually be evil spirits, posing a supernatural threat. But neither Samhain nor Halloween was originally connected with evil or the devil.

Curiously, Martin Luther is said to have nailed his famous “95 Theses” to the door of Schlosskirche Allerheiligen (the “Castle Church” or “All Saints’ Church”) in Wittenberg — and, thus, to have launched the Protestant Reformation — on 31 October because he knew that the church would be packed with worshippers the following morning, on All Hallows’ (or All Saints’) Day. Hence, 31 October is also celebrated now as “Reformation Day.”

Hugh Nibley criticized what he considered a macabre “Gothic view of death,” and, to a large degree, our society has moved beyond it. Unfortunately, as he pointed out in 1954, “The reaction to it in modern times has been a flight to another and equally unhealthy extreme, for the present age seems determined to leave death out of its calculations entirely, save for certain annoying details of a sanitary and legal nature.  This has done much to make for shallowness and triviality in modern life.  We think and act as if death were not part of the program at all, or as if it were a frightful piece of bungling in the ordering of our lives, a terrible and senseless mistake.  Death has disappeared from our serious thinking.”

The restored Gospel of Jesus Christ, however, offers a better alternative to either obsession with death or real or pretended indifference to it.

“Death hath passed upon all men,” the Book of Mormon prophet Jacob explained, as part of “the merciful plan of the great Creator” (2 Nephi 9:6).  It is, in fact, the necessary door through which we can return to his presence.  And, while Memorial Day is nice and Halloween is fun, ultimately the proper way to think of death is neither nostalgia nor in terror.  That is one of the great lessons taught to us by and in the temples of the Church of Jesus Christ of Latter-day Saints.  In them we do remember and serve the dead, in an environment not of darkness and sorrow but of light, joy, hope, and love.

I have drawn here from Professor Nibley’s “Two Ways to Remember the Dead,” in Hugh Nibley, “The World and the Prophets,” 3d. ed., ed. By John W. Welch, Gary P. Gillum, and Don E. Norton, vol. 3 in The Collected Works of Hugh Nibley (Salt Lake City and Provo: Deseret Book and Foundation for Ancient Research and Mormon Studies, 1987), 163-171.

My favorite memory of Halloween was the year my mom and I went to see Disney's "Fantasia". The "Night on Bald Mountain" piece, with its massive demon being overcome and subdued by Christianity, in the form of a line of lantern-bearing priests, the sacred music, and coming of dawn (the Light of Christ), made a huge impression on a 10 year old girl. We were Lutherans at the time, but I don't remember my parents mentioning anything about the Reformation. I left that church a few years later, hunting and searching for the answers neither it, nor any other church I looked at, could provide. When I found the CJCLDS, I again remembered the impressions I'd had as a child. 45 years later, I still love Halloween (I was a wood elf this year), but have an adult's understanding of just how that demon was conquered.

Thank you for this article. It was very interesting and informative.