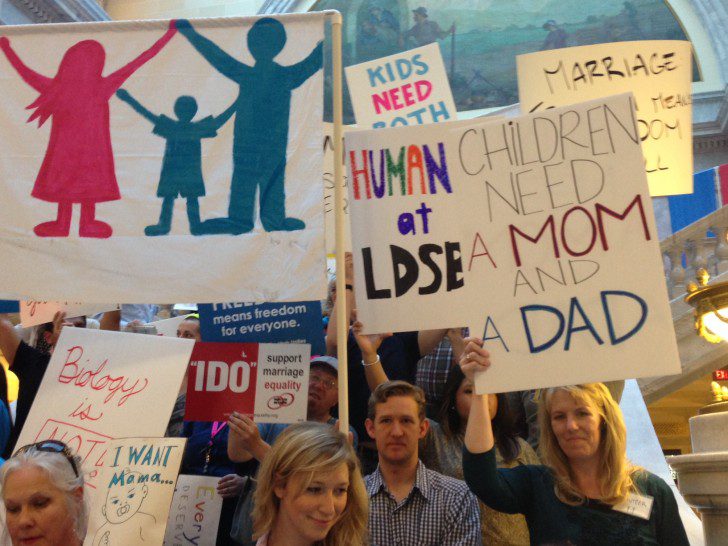 Utahns Won’t Give up on Marriage, Celebrate in State Capitol Rally

By day the Supreme Court heard oral arguments about whether states could determine their own marriage laws. By night a crowd, among pink and blue banners, gathered into Utah’s Capitol Rotunda to celebrate marriage and be buoyed up to never abandon the bedrock of civilization. “We are the 66%” some of their signs said, meaning part of the overwhelming majority who voted for a marriage amendment in Utah that was then struck down by the courts.

Unhappiness with courts that assumed such power was one of the themes of the event.

Tuesday, Rep. LaVar Christensen, who authored Utah’s marriage amendment, Rep. Al Jackson, who authored the Religious Freedom bill, Juleen Jackson, vice-president of National Homemakers of America, and nationally acclaimed blogger Matt Walsh rallied a crowd, saying they will not stop fighting for marriage and that it is the people and the states’ rights to determine their own marriage laws.

Rep. Christensen pointed out that only two years ago the Supreme Court’s decision in Windsor affirmed that every state has the unique, sovereign authority to decide their own marriage laws. He said that for the Court to claim that a state had the freedom to say yes to same-sex marriage, but that a state didn’t have the right to say no was absurd.

He quoted former solicitor general Rex Lee saying sadly judges claim “the license to roam at will through the territory of legislative policymaking.” He noted that Jefferson worried that the constitution could become “a mere thing of wax in the hands of the judiciary, which they may twist, and shape into any form they please.”

He quoted Justice Stephen Breyer’s comment to advocates for same-sex marriage, from Tuesday’s hearing, “And suddenly you want nine people outside the ballot box to require states that don’t want to do it to change what marriage is to include gay people?”

In the current case, 80 legislators filed a brief saying, “it is wholly inappropriate to apply what they’ve called privacy concerns to mandate and compel states to endorse same-sex marriage.

Rep. Jackson said, “We’ve allowed the federal courts to determine the standards of decency, morality and safety” which was designed from the Founding to be a matter for the people and the states as their closest representatives.

He said, “The country has been injured from east to west, emanating from Washington DC. This nation will be healed from west to east and Utah must lead out in that endeavor.”

“We must,” he said, “understand and embrace that our individual freedoms come from God not government.”

Juleen Jackson said that mothers and grandmothers come to her and ask what they can do for their children who are growing up in such a confusing environment for families. She says, “Teach them. Teach them brilliantly.” We must set aside our best time for it.

Blogger, Matt Walsh, reminded people that tackling controversial issues, like marriage, requires courage. The media says if you are against gay marriage, you are a “slobbering, hateful domestic terrorist.” In actuality, “to label a person because you disagree with them is bigoted.

He said, “Millions who identify themselves who care about family values have given up this fight. They have said that it is lost. Some of our spokesmen have said it is lost. They have given up on the very base and structure of civilization. The battle is lost they say, from the sidelines. They shout from a distance to those of us on the battlefield and they say it is lost.

“The labels have no actual clout. Once you reach a point where you don’t care what people say about you or who is saying it, then you are free. Then there is nothing you can do. You go overseas and Christians are slaughtered for their beliefs. All we have to worry here about is some comments on Facebook. Some great philosopher said, ‘Sticks and stones may break my bones, but words will never hurt me. ‘ The words mean nothing.

The bottom line, Walsh says, is that marriage by definition is between a man and woman. It is an unavoidable reality and one which every civilization has held as true. No other relationship bears the power to create people. In light of this most societies have afforded a respect for this union out of necessity and sound philosophy and they gave that bond a name and they called it marriage.

“If marriage is not between a man and a woman, then you’ll have to tell us what it is,” he said. “If it is just a romantic attachment, then it offers up a whole slew of alternative definitions.”

He quoted G. K. Chesterton: In the matter of reforming things, as distinct from deforming them, there is one plain and simple principle; a principle which will probably be called a paradox. There exists in such a case a certain institution or law; let us say, for the sake of simplicity, a fence or gate erected across a road. The more modern type of reformer goes gaily up to it and says, “I don’t see the use of this; let us clear it away.” To which the more intelligent type of reformer will do well to answer: “If you don’t see the use of it, I certainly won’t let you clear it away. Go away and think. Then, when you can come back and tell me that you do see the use of it, I may allow you to destroy it.”

Same-sex marriage advocates, Walsh said, want to take down the fence and move it down the road, but if they don’t understand why it was there, they won’t know where to put it.

“Men and women literally give birth to civilization and create life. There’s nothing else like that. It’s not the temporary union of two people who are fond of each other.”

So why, says Walsh, would he bother to take such an unpopular stand?

You got it, Charlie Brown. It’s called “Newspeak”, and it’s the subject of the novel *1984*. It’s frankly terrifying how exactly LGBT Inc. mirrors Big Brother in that novel.(For the record, it’s interesting to note that SCOTUS refused to hear a marriage redefinition case in 1972, “for wont of a federal question”. Oh, how times changed when ultraliberal America sets out to brainwash a generation.)