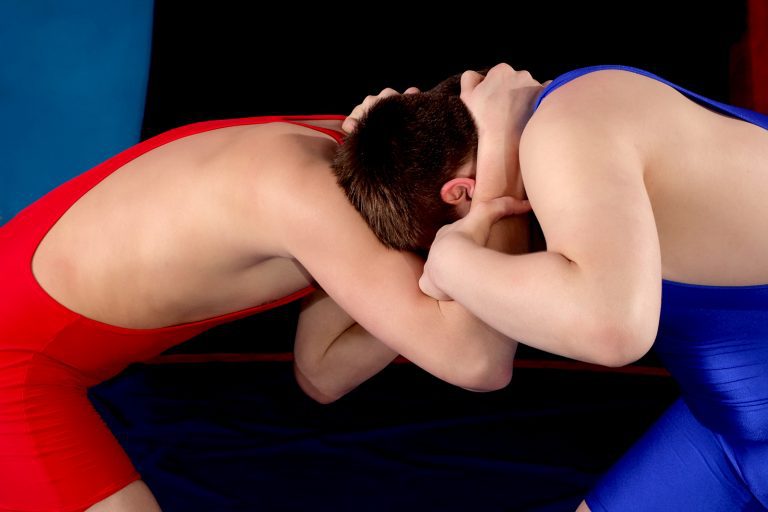 The following is the final installment in a series. To see the previous part in the series, CLICK HERE.

Coach had put Curly, our marshmallow water boy, in to wrestle, claiming there were no other heavyweights. Coach said Curly could win team points by default. We stuffed Curly into my uniform each time, and it was so tight he walked like a ballerina. Then, at the championship round, we found out there was a Mack-truck-size heavyweight from the home team.

After Curly ran for his life twice, only to be dragged back to the center by Mack, Coach was embarrassed and facetiously suggested to Curly that he should just pin himself. Curly apparently thought that was a good idea.

The two wrestlers again lined up across from each other. The instant the whistle blew, Curly flopped on his belly, then rolled onto his back, arms outstretched, right in front of Mack. Mack was confused. He looked like a deer caught in the headlights. He looked at Curly on the mat, then back at the ref, then back at Curly, then back at the ref. The ref, who had overheard Coach’s suggestion to Curly, was gasping and choking. His face was red, and his whole body shook as a gurgling came from his throat. Coach was yelling at Curly to get up. But Curly lay there as Mack continued to stare, unsure what to do.

The ref’s inability to blow the whistle caused the time on the clock to run out for the first round. As the buzzer sounded, Curly still lay there. Finally, the ref, not knowing what else to do, got enough air to blow his whistle and pointed at Curly, who was still lying in the center circle. “Third stalling!” Then, pointing at Mack, the ref raised two fingers. “Two points.”

Curly could hardly get off his back. He was like a turtle flipped over. To make matters worse, the wrestling suit kept stretching and popping as he tried to rock onto his stomach. Finally, he rolled over and struggled his way to his feet. He got right up in the ref’s face. “What are you talking about? I wasn’t stalling. I got on my back as fast as I could. I was pinned, and you know it. I demand you call a pin.”

The tears were now flowing down the ref’s face. He obviously had never had anyone demand he call a pin against them before. It probably went against all the rules he knew. He shook his head. “I can’t call a pin if your opponent isn’t on you.”

“But I was flat on my back!” Curly argued.

I heard an old man sitting behind our bench say, “This is the best entertainment I’ve had in years. I would have paid $50 to see this show.”

The coin was tossed, and Mack won the toss. For a second, he almost took the down position, but then it seemed to occur to him that if Curly was on top, he would probably run, and it would end up being another chase. So Mack took the top position. The ref signaled for quiet, and finally the crowd simmered down. Curly knelt, gasping for air as the suit cut off his breathing.

Mack got on top and put his arm around Curly. The ref blew his whistle, and Curly rolled so fast onto his back that he rolled right out from under Mack, who dropped flat on his stomach. As Mack scrambled to his knees, Curly, realizing he had rolled too far, started trying to scoot himself back over to Mack.

As Mack knelt there, staring at Curly inching his way back over, Curly’s voice suddenly rang out through the gym. “Get over here and pin me, you moron!”

Mack, finally coming to himself, jumped toward Curly, landing on him with a thud. Curly let out a grunt and yelled, “Not so hard, you idiot!”

With both Mack and Curly trying to move Curly into a pin position, they seemed to be working against each other, and neither could get Curly’s shoulders flat on the mat. Finally, the ref, apparently having a feeling of mercy come over his heart, and desperately needing to stop laughing so he could get some air, slapped the mat, ending Curly’s torment.

From under Mack, Curly’s voice sounded loudly. “It’s about time!”

The crowd cheered and clapped. “Never seen anything like it in my life,” the old man behind us chortled to his friend.

As the heavyweights took the medal stand, and Curly was announced for his second-place medal, the crowd rose and gave him the only standing ovation I have ever seen at a wrestling tournament.

I thought I would die before the final installment of this story came. Just like waiting for Christmas morning when I was 7 years old. Loved it!!!

Thank you it was worth the wait. If you had a video of that and put it on Youtube you could be wealthy!!