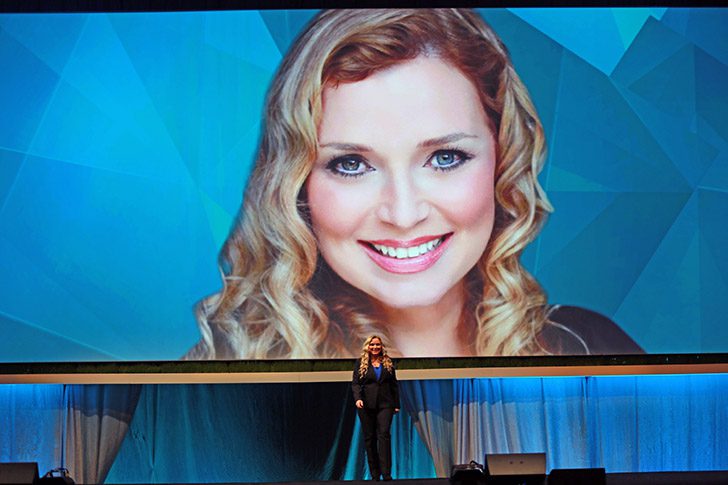 The Secrets in Your DNA May Surprise You

Maurine wrote the text and Scot took the photos for this article. CeCe Moore was a keynote speaker at RootsTech 2017.

CeCe Moore, founder of TheDNADetectives.com and the consulting DNA expert and writer on the television show “Finding Your Roots” said this about where DNA research is headed. “Imagine the unimaginable, because that is the future of genealogy.”

New doors to new possibilities are opening in breakthroughs that she said, “will surpass our wildest imagination.” The future of DNA research will be our key to not just unlocking the past and but also allowing us to glimpse farther into the past in ways that we have never before thought possible.

We will be able to piece together our ancestors DNA from the DNA of their descendants as that pool grows and research advances. “So in ten years what will we be able to do with that knowledge?” she asked. “Will there come a day when we can recreate our ancestors’ appearance? I believe this will happen.

“Researchers are already making important discoveries in this area. Specific gene variants are tied to our physical traits so if geneticists can identify which ones are responsible for the factors that influence our individual appearance then we can reverse engineer this to recreate the faces of our ancestors.

“Scientists are already making great strides. It can be done. We can recreate their hair texture and color, their skin tone, their eye color. It seems like science fiction, I know but a few years ago so did what we are doing with genetic genealogy today.

“Imagine looking into the face of an ancestor that you have only known on paper. How about reconstructing or accessing their memories? Now, wouldn’t that be something?”

Moore said that DNA testing is already bringing genealogy alive in a whole new way. Working on the frontlines of the field, she said, “I’ve witnessed identities re-examined, families redefined and secrets unlocked all through genetic genealogy.”

Most striking to her is this. “I’ve learned that biological bonds are strong, often surviving through life-long separation. Every day I see evidence that our ancestors live on through us and that they affect us much more than we realize. There’s no denying nurture’s importance, but I have seen tremendous evidence that nature, our DNA, has a profound effect on who we are.”

She wonders if the source of the passion so many have to learn about their ancestors is because we carry bits and pieces of them inside of us. “Is this yearning that we have coming from them?” she asked. “Are our biological ancestors calling out to us through the very DNA that they have passed on to us?”

We know our ancestors have passed down their physical traits, but scientists now suspect that they have given us much more than that.

She listed several recent articles. “Reporting on an academic study the BBC said, ‘Behaviors can be affected by events from previous generations which have been passed on through a form of genetic memory. The findings provide evidence of trans-generational epigenetic inheritance.’

“Psychology Today recently wrote about Carl Jung. He’s well known for his theory of the collective unconscious, which unlike the personal unconscious is a type of genetic memory shared by individuals with a common ancestor or history.

“Discover magazine writes, ‘Like silt deposited on the cogs of a finely tuned machine, after the seawater of a tsunami recedes, our experiences and those of our forebears, are never gone even if they have been forgotten.”

While we wonder if it is possible that we share our ancestor’s experiences in our DNA, Moore has seen hundreds of examples, starting in her own family with her brother-in-law John.

Traditionally, she notes genealogists have researched a paper trail and then used DNA to confirm the findings. Increasingly, the research trail is going the other direction—first DNA and then paper. That’s what happened with John.

He grew up with a tradition in his family that he had some Native American ancestors in his line, but he knew little about his own ancestry because he his father had abandoned the family when he was young and his mother’s ancestry didn’t come up in conversation.

Yet, when John’s DNA tests came back he was 0% Native American and 6.6% African! This inspired Moore to research his paper trail and, as it turned out it was very easy.

They researched further on the Monticello website that gave information about Thomas Jefferson’s home, and there was a picture of the two women. “John’s jaw fell to the floor because this was the picture that he grew up with on the wall of his family home.”

Moore said, “This man who grew up as a fatherless boy discovered that he was a direct descendent of Thomas Jefferson, one of our founding fathers. Not only that, but that he was part of our important history—slavery.”

Yet, that’s not the entire story. John had been drawn to Monticello before. Fifteen years earlier, he and his wife and taken an anniversary trip to Monticello and had fallen madly in love with it. John loved it so much, in fact, he brought one of his daughters back the very next year. “When she came into the dining room, she promptly passed out,” said Moore. it was a hot, humid day. It could be a coincidence, but she has never passed out before or since. John was also tickled because he loves to brew beer in his basement, and he found out that the Hemings were brewing beer with Thomas Jefferson at Monticello.”

It could be serendipity. Moore would not have been quite sure what to think of that—except that in hundreds of cases she has seen that there is something to this—the connection between biological relatives and ancestral locations, or the uncanny similarity in choices, or a sense of familiarity that cannot be explained by time spent together.

She asked some of the adoptees she has worked with, what it’s like to meet their biological family for the first time. Here are some of their answers:

“My mother and I had our first meeting in Chicago. When we opened our makeup bags the content was identical—the same brands, colors, everything. “

“My half sister had the same car. Her husband had the same first name and birthday as my husband and the first time we met, we kept saying the same things at the same time.”

“My birth mother and I had each designed a logo for a government agency.”

My birth mom lived in an old white house on a hill with a big front porch as did I. When we met we were dressed alike in khakis with a layered t-shirt and over shirt with our hair dressed just alike. But the craziest thing that I had this old set of vintage sheets that was missing one of the pillow cases. One day, I am at her house and I see that she has one pillowcase and nothing else of this same vintage set.”

“My husband and his half sister have the same two cars and an old truck. They both have fake deer in their yards even though they live in a city and they have the same password on their phones. They are both workacholics who just started taking one day off a week.”

“What this tells me,” said Moore, “is that our ancestors are affecting us. It’s the only explanation for these people who are biologically connected, but had never met before.

“They meet and they find out they have so much in common, not just traits and talents but behaviors and choices. I saw it so many times that it made me realize that there really is something to our ancestors living on inside of us.

“Some call this genetic memory. Others call it instinct. Whatever you choose to call this phenomenon, we know that it does exist. Even scientists are saying so now.”

Moore said that DNA testing has brought forgiveness and healing to many families. “Dozens of foundlings, who are people who are abandoned as newborns or as young children have discovered their roots through DNA testing and even had the opportunity to meet their biological relatives, including sometimes their birth mothers, the one who abandoned them. They have received answers to their lifelong questions about their identity and the circumstances surrounding their abandonment.

Tens of thousands of adopted children have also sought their biological family using DNA technology. “Many expand the circle of love and support in their families, and that’s not to say that they are replacing their adoptive families. That’s not the case. It’s just expanding that circle of love and it’s a wonderful thing to see,“ said Moore.

As one woman said, ““It’s the best kind of magic to finally feel that you are part of something. All of my life I have been the odd man out, but since finding them, no more. I found myself when I found them.”

Moore and her DNA detective work has also been the source of unlocking mysteries, some of which have been featured on television shows like 20/20.

Paul Fronczak’s parents had their newborn stolen out of their at the hospital in the 1960’s and the FBI could not find their baby. A year and a half later, a toddler was abandoned on a street corner and the FBI determined by the shape of his ear that he must be little Paul. That was the best they had to work with at the time. The little boy was given to the Fronczak family who raised him as their own.

Recently, he took a DNA test and discovered he’s not Paul Fronczak, nor biologically related to his family. He wanted to know who he was. It took Moore three years of research, using DNA, but she finally solved the case. He learned what his biological identity was and also learned the surprising news that he had a twin sister.

Benjamin Kyle was an amnesiac found behind a Burger King with no memory of who he was. Both the FBI and the Georgia Bureau of Investigation tried everything to determine his identity, including fingerprinting, DNA tests and facial recognition. This loss of identity had a profound effect on him. He could neither get a drivers’ license, a passport—or even stay at a homeless shelter because he had no Social Security number. Finally after 11 years, DNA research had advanced to the point that he was able to get both his biological and his legal identity back.

Yet, the greatest miracles that the advances in DNA research may bring is helping the family history enthusiasts get beyond those brick walls that they hit in their research.

Moore said that the DNA testing is “the test that’s most popular and successful in revealing our family history. As much as the technological advancements and scientific discoveries have aided us in that quest, it’s the citizen scientists who inspired an absolute revolution in DNA testing and research.

“Our passion and enthusiasm for genealogy research sparked one of the fastest growing and most exciting industries today. Together we’ve created a database of testers that’s gone from a hand full of enthusiasts just a few years ago to millions of people, soon to be tens of millions and then hundreds of millions. What we are genealogists are doing is important for understanding the past, for ushering in the future and for personal and collective healing. Our work is changing lives, changing society, changing history and even changing the future,” she said.

I'm so happy to read Sue Maxwell's comment. Thank you, Sue - for promoting the truth of the character of a righteous man.