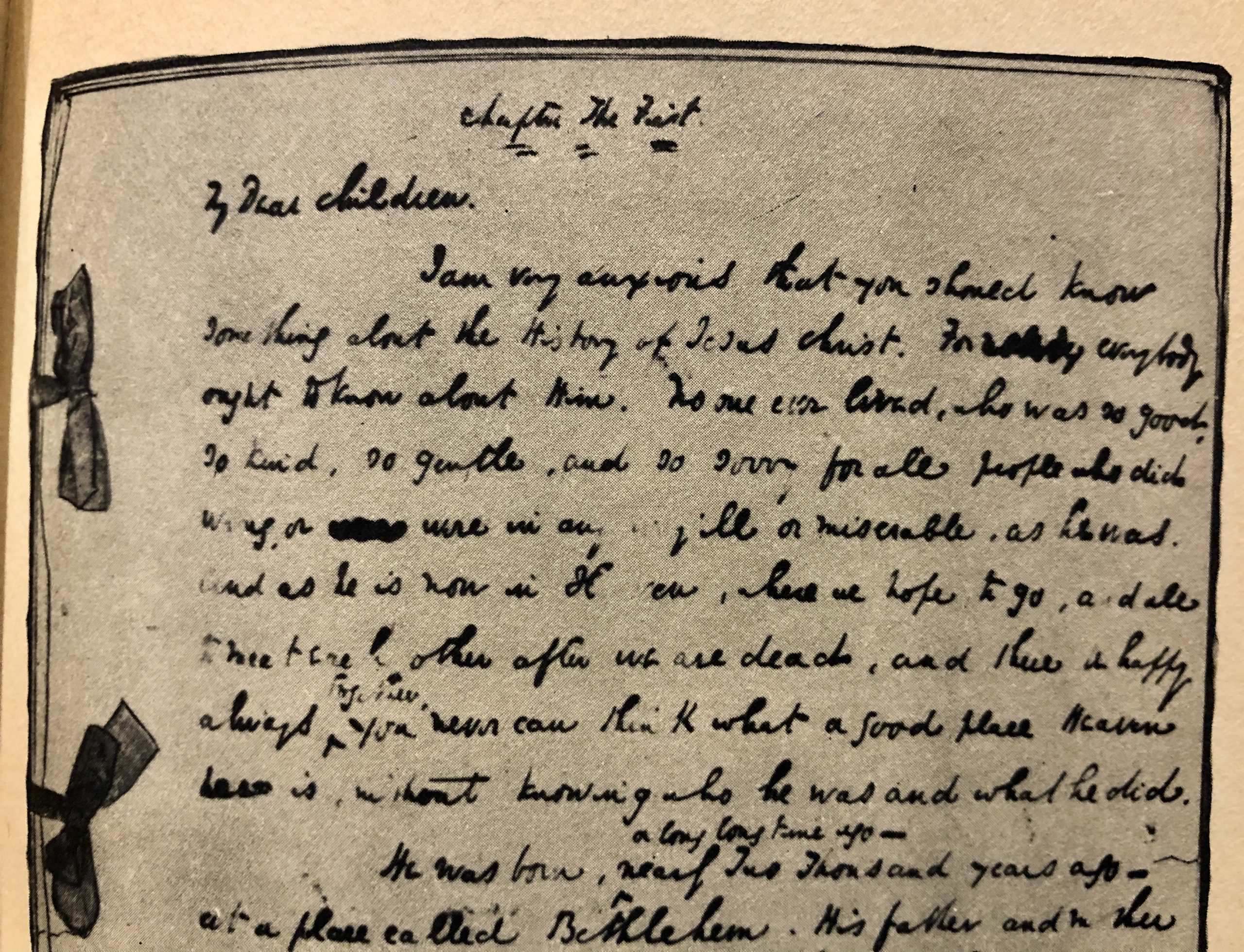 During the most recent Christmas Devotional of The Church of Jesus Christ of Latter-day Saints, President Dallin H. Oaks referred to and read from Charles Dickens’ The Life of Our Lord.  Almost immediately, in the middle of President Oaks remarks, my cell phone began to vibrate with text messages: Do you own a copy of that book? Do you have a first edition? Was Dickens really that religious? Well, here are a few of my answers to those questions.

In 1846, three years after Charles Dickens finished writing A Christmas Carol, he began work on a story that he knew that he would never share with the rest of the world. He penned those words for his children—and for their eyes alone. Three years later, while working on David Copperfield, Dickens finished the sixteen-chapter manuscript of The Life of Our Lord.  At the time, Charles Dickens and his wife Catherine were the parents of eight children—all of whom were under the age of twelve! And, for the next eighty-five years, that manuscript would be a closely guarded family secret.

Catherine Dickens’ younger sister, Georgina Hogarth, lived with the Dickens family.  In a letter that she wrote to a close friend, she gave insight into “The Life of Our Lord”:

“I must tell you about the beautiful little New Testament which he [Dickens] wrote for his children.  I am sorry to say it is never to be published…He wrote it years ago when his elder children were quite little.  It is chiefly adapted from St. Luke’s Gospel, most beautiful, most touching, most simple as such a narrative should be.  He used to read it to the little boys before they were old enough to read themselves.  I asked Charles if he did not think it would be well for him to have it printed.  He said he would look over the manuscript and take a week or two to consider it.  At the end of the time he gave it back to me and said he had decided to never publish it—or to even have it printed privately”.

Dickens began his narrative for his children as follows:

I am very anxious that you should know something about the History of Jesus Christ.  For everybody ought to know about Him.  No one ever lived who was so good, so kind, so gentle, and so sorry for all people who did wrong, or were in any way ill or miserable, as He was.  And as He is now in Heaven, where we hope to go, and all to meet each other after we are dead, and there be happy always together, you never can think what a good place Heaven is, without knowing who He was and what He did.

He was born, a long long time ago—nearly two thousand years ago—at a place called Bethlehem.  His father and mother lived in a city called Nazareth, but they were forced by business to travel to Bethlehem.  His father’s name was Joseph, and His mother’s name was Mary.  And the town being very full of people, also brought there by business, there was no room for Mary and Joseph at the Inn or in any house; so they went into a stable to lodge, and in the stable Jesus Christ was born. There was no cradle or anything of that kind there, so Mary laid her pretty little boy in what is called the manger, which is the place the horses eat out of.  And there He fell asleep.

This simple narrative continued for several dozen pages, and ended as follows:

Remember! It is Christianity TO DO GOOD, always—even to those who do evil to us.  It is Christianity to love our neighbors as ourself, and to do to all men as we would have them do to us.  It is Christianity to be gentle, merciful, and forgiving, and to keep those qualities quiet in our own hearts, and never make a boast of them, or of our prayers or of our love of God, but always to show that we love Him by humbly trying to do right in everything.  If we do this, and remember the life and lessons of Our Lord Jesus Christ, and try to act up to them, we may confidently hope that God will forgive us our sins and mistakes, and enable us to live and die in peace.

And, what about Dickens’ belief in the Bible?  In a letter to a clergyman, Charles Dickens professed “There cannot be many men, I believe, who have a more humble veneration for the New Testament, or a more profound conviction of its all-sufficiency than I have.”  With eight children under the age of twelve, many of whom were quite inquisitive, Dickens, through this simple narrative of the life of Christ, sought to answer their questions about religion and faith.

In June of 1870, Charles Dickens suffered a stroke, which would cause his death a day later.  Before he died, he wrote one last letter to a man who had accused him of irreverence in a passage of the last book that he wrote called The Mystery of Edwin Drood.  These are the words in the last paragraph of that letter—and perhaps Charles Dickens’ final written words, “I have always striven in my writings to express veneration for the life and lessons of Our Saviour, because I feel it; and because I rewrote that history for my children—every one of whom knew it from having it repeated to them—long before they could read, and almost as soon as they could speak.  But I have never made proclamation of this from the housetops”.

Upon the death of Charles Dickens, the manuscript of The Life of Our Lord was bequeathed to his sister-in-law Georgina Hogarth.  She kept it safe until she died forty-seven years later [1917].  At her death, the manuscript was given to Dickens’ youngest child, Sir Henry Fielding Dickens, with strict instructions that it was not to be published while any of Dickens children lived.  Sixteen years later, in December of 1933, Sir Henry Dickens, the last of the Dickens children, died.  In his will he wrote, “I give and bequeath to my wife the original manuscript of my father’s ‘Life of Our Lord’ which was bequeathed to my aunt Georgina Hogarth in my father’s will, and given by her to me to hold.  I have felt constrained to act upon my father’s expressed desire that it should not be published, but I do not think it right that I should bind my children to any such view, especially as I can find no specific injunction against such publication”.

The widow of Sir Henry Dickens and his children then made a decision that “The Life of Our Lord” by Charles Dickens should be published and given to the world.

Reid N. Moon is the owner of Moon’s Rare Books in Provo, Utah.  He is married and the father of eight children.  He and his family are members of the Stonewood 3rd Ward in Orem, Utah.  The original Charles Dickens painting, shown above in the article, is on display at Moon’s Rare Books–courtesy of the artist Matthew David Grant.  An original first edition “The Life of Our Lord” [1934] by Charles Dickens is also on display.

Comment to a comment. Since none of us have met either Mr Dickens or Mrs Dickens, perhaps we should reserve judgement on who was and who was not crazy. It could be he was a bum. It could be if you had known Catherine, you would ask Mr Dickens, 'how do you live like this?' It could be since she is a woman, she is good; since he is a man, he is bad. It could be we should be kind to both of them, as if they were both still living, especially since none of us really knows anything about it.

It is tempting, as they say, to throw out the baby with the bathwater. The movie "The Man Who Invented Christmas" gives us a glimpse of how difficult it was for Catherine to live with a temperamental writer, and how challenging it was for him to try to write with many interruptions. How desperately he feared poverty returning to his life. PBS' series "Victoria" shows how often husbands would fear that their wives were "mad" from real hormonal fluctuations that come with PMS, postpartum depression, or simply the frustration of not being taken seriously. Husbands had all power while wives had none. That being said, none of us have lives that can stand up to close scrutiny. Future generations may look at us with an even more-enlightened eye and wonder at the flaws we take for granted, even as we look at Victorians with a certain amazement (and gratitude that we don't live in the past!) The literary works and the testimony of Jesus Christ that Charles Dickens has left behind are still of value, even if their author is not someone with whom I would care to spend all eternity. I'm sure his character is much more developed now. So thank you, Charles Dickens!