'The Nutcracker and the Four Realms': An Enchanted Journey with the Importance of Family at its Heart | Meridian Magazine 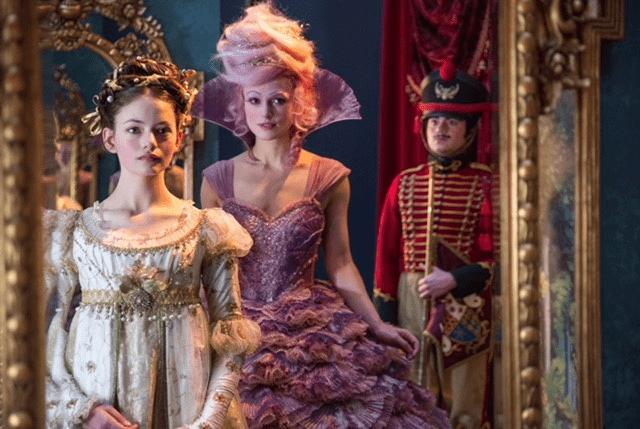 ‘The Nutcracker and the Four Realms’: An Enchanted Journey with the Importance of Family at its Heart

‘The Nutcracker and the Four Realms’ opens in theaters November 2, 2018.

I came into Disney’s The Nutcracker and the Four Realms with only a passing familiarity with the original ballet upon which the film is loosely based. Thankfully, you don’t need a lifelong nostalgia for the source material to appreciate the warmth and holiday spectacle that is this creative and adventurous film. Though I didn’t see it in the intended 3D, I felt immediately whisked away to the flickering, lamplit London of another era and even more transported by the lavish and colorful world of the Four Realms.

The film follows the story of a brave and clever young girl, Clara (Mackenzie Foy), who has very recently lost her brilliant, inventor mother. It is Christmas Eve and she is struggling with the grief and especially struggling to understand the way her father (Matthew Macfadyen) is processing their joint loss as they attend a Christmas party in the home of her godfather Drosselmeyer (Morgan Freeman). Her mother left her a single, priceless gift, but Clara lacks the key to open it until her godfather leads her to it and at the same time leads her to an unforgettable adventure in the Four Realms; a whimsical world of magic and mystery existing just parallel to our own.

The plot was thin in places and there were a few times when the motivation of certain characters was unclear, but I loved seeing a strong, smart female use the laws of physics to bravely battle her way through a world of unexpected twists and turns. Clara Stahlbaum was no wilting flower and her sincerity and strength added a very appealing element to the film.

Also unexpected was the emphasis on legacy and on the importance of healthy family ties. Not only did Clara garner great strength from a mother she aspired to emulate, but the film also emphasized her need to better understand her father and connect to him in a time when he was feeling a loss perhaps even more deeply than she. It was refreshing to see a fantasy film that stopped to reaffirm the importance of love and connection in family relationships rather than just focusing on conquering a villain by the end.

True to the ballet, this film takes time to indulge in the visual and the music of The Nutcracker, even engaging Misty Copeland, the first African-American principal dancer for the prestigious American Ballet Theater, for a somewhat lengthy dance sequence not so different from the style of Fantasia.

Ultimately, the spectacle is tied in with the action in a way that keeps the audience engaged and entertained, though at times the weaving together of the two comes at the expense of story. Regardless, this film is a welcome respite from the long line of superhero films that tend to dominate the theaters and will certainly do more than its share to get you in a bright, jolly holiday mood now that the spiderwebs of Halloween have been cleared.

‘The Nutcracker and the Four Realms’ opens in theaters November 2, 2018.