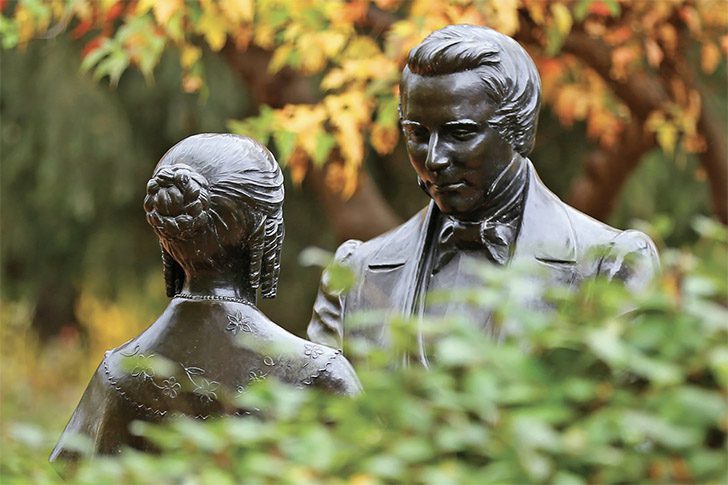 The Nauvoo Diary: Come See the Theme for March

When I conceived the idea for the new Nauvoo Diary & Engagement Calendar, the first in the new Heritage Journal Series, I organized the twelve months into themes. This made it so much easier to choose photographs to highlight those months. When choosing from untold thousands of images, this truly helped.

Let me tell you about March.

Of course, it seemed a natural to choose the Female Relief Society of Nauvoo for the month of March. The Relief Society was officially organized on Thursday, March 17, 1842 and so I wanted to highlight this incredible, inspired, heaven-revealed female organization.

The vertical image next to the month of March calendar is an angle I really love from the Nauvoo Monument to Women. It is a medium close up with a low depth of field focusing on Joseph and Emma.  The significant thing about this particular sculpture is that Joseph is placing a $5 gold piece in Emma’s hand. This represents the money Joseph offered on March 17, 1842 to commence the funds of this divine institution where Joseph said, “all I shall have to give to the poor, I shall give to this Society.”

For the first week of March I have included a beautiful image of Joseph Smith’s Red Brick Store with the sun just bursting over the roof, just above the room where the Relief Society was first organized.  This picture symbolizes the light that was bursting forth upon the earth with the organization of the Relief Society.  That bright new sun was to me like what Joseph Smith said to the women, “that the Society should move according to the ancient Priesthood, hence there should be a select Society separate from all the evils of the world, choice, virtuou[s] and holy— [He] Said he was going to make of this Society a kingdom of priests [as] in Enoch’s day— as in Pauls day.” (Relief Society Minutes, March 31, 1842)

Two weeks later in the Nauvoo Diary I have an interior shot of the Red Brick Store, the reconstructed room where the Relief Society was first organized. I always feel the Spirit in this room as this was also the very room where Joseph Smith revealed the temple endowment for the first time 47 days after the Relief Society was organized (on May 4, 1842).  We always sing some wonderful hymn as a tour group in this room like Redeemer of Israel or Let Zion in Her Beauty Rise.  What a wonderful room!

The last week of March in the Nauvoo Diary I have placed a beautiful vertical image of a window from the home of Sarah Melissa Granger Kimball in the western flats of Nauvoo in old Commerce. It was in this home that the first ideas for the Relief Society came about. The sisters used to gather here, and this is the original home (one of my favorites in all of Nauvoo), and they would knit shirts for the brethren who were working on the temple. They came to know many sweet times with the Spirit of the Lord here and they decided to form themselves into an organization. They asked one of their number, Eliza R. Snow, to write up a constitution. Within a short time, they presented it to the Prophet Joseph and he said that it was the finest constitution he had ever seen, but he wanted to organize the sisters as an arm of the priesthood and he invited them to meet over his Red Brick store that next Thursday to organize. From this humble beginning this would grow to become the largest and oldest women’s organization in the world.

These are the kinds of photographs you will see each and every week of the year in your own copy of the Nauvoo Diary and Engagement Calendar.  Please order yours today by going to: https://latterdaysaintmag.com/nauvoo You will be so glad you did.

You can also just CLICK HERE to order yours today.