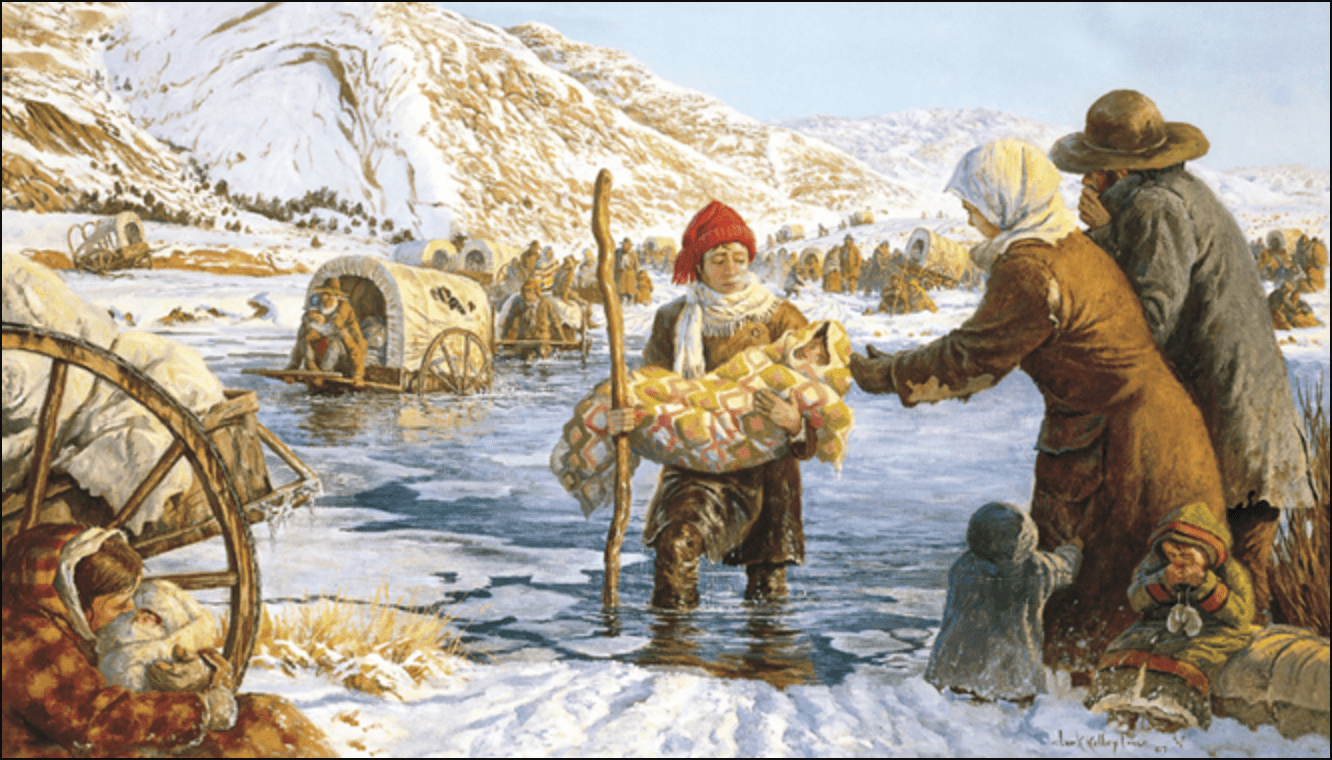 Two passages from a rough manuscript:

Jedediah M. Grant, a counselor to Brigham Young in the First Presidency of the Church of Jesus Christ of Latter-day Saints, had lost his four-month-old daughter Margaret to cholera during the pioneer trek westward to the Great Basin of the Salt Lake on 2 September 1847.  She had to be buried in mud, without a coffin.  His wife, Margaret’s twenty-eight-year-old mother Caroline, died of the same disease on the Bear River, near modern Evanston, Wyoming, a few weeks later, imploring him in her last words to take her on to the Valley of the Great Salt Lake and to bring Margaret to her.

Faithfully, Jedediah constructed a coffin from a dismantled wagon bed, placed her body in it, and took it with him for those last agonizing days.  Caroline was the first white woman buried in the new settlement of Salt Lake City.  On 1 October, the day following her funeral, Jedediah turned around and headed back to retrieve little Margaret’s body from the vicinity of the Sweetwater River, at least a couple of weeks back along the trail.  When he arrived at the site, however, he found that wolves had dug up his baby’s body and eaten her.[1]  His feelings can perhaps be imagined.  In 1856, however, just forty years old, he himself was about to die.  On his deathbed, he told Heber C. Kimball that he had been over on the other side two nights in succession, where he

saw the righteous gathered together in the spirit world, and there were no wicked spirits among them.  He saw his wife; she was the first person that came to him.  He saw many that he knew, but did not have conversation with any except his wife Caroline.  She came to him, and he said that she looked beautiful and had their little child, that died on the Plains, in her arms, and said, “Mr. Grant, here is little Margaret; you know that the wolves ate her up, but it did not hurt her; here she is all right.”[2]

Jedediah M. Grant, dying in 1856, said, “I have been into the spirit world two nights in succession, and, of all the dreads that ever came across me, the worst was to have to again return to my body, though I had to do it.”[1]  Speaking at Grant’s funeral, Heber C. Kimball recalled Grant telling him about his returns to the body, and reported that “he felt extremely sorrowful at having to leave so beautiful a place and come back to earth, for he looked upon his body with loathing, but was obliged to enter it again.”[2]

Here are some of the other details that Brother Grant remembered from the vision:

He also spoke of the buildings he saw there, remarking that the Lord gave Solomon wisdom and poured gold and silver into his hands that he might display his skill and ability, and said that the temple erected by Solomon was much inferior to the most ordinary buildings he saw in the spirit world.
In regard to gardens, says brother Grant, “I have seen good gardens on this earth, but I never saw any to compare with those that were there. I saw flowers of numerous kinds, and some with from fifty to a hundred different colored flowers growing upon one stalk.” We have many kinds of flowers on the earth, and I suppose those very articles came from heaven, or they would not be here.
After mentioning the things that he had seen, he spoke of how much he disliked to return and resume his body, after having seen the beauty and glory of the spirit world, where the righteous spirits are gathered together.
Some may marvel at my speaking about these things, for many profess to believe that we have no spiritual existence. But do you not believe that my spirit was organized before it came to my body here? And do you not think there can be houses and gardens, fruit trees, and every other good thing there? The spirits of those things were made, as well as our spirits, and it follows that they can exist upon the same principle.
No Comments | Post or read comments