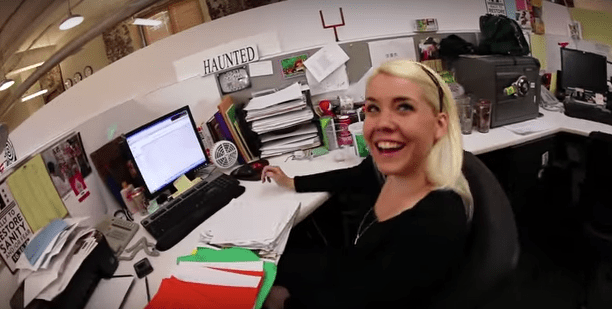 The Curse of Being Too Happy

The following was written by Jenna Kim Jones for the Mormon.org blog. To read the full article, click here.

Her “I’m a Mormon” came out several years ago:

I am a stand-up comedian. When I first started out in the comedy world, I got teased all the time. Here’s why. I remember being at a comedy club years ago standing around waiting to perform when I struck up a conversation with a couple of other comics. They asked why I was hanging around the club. When I told them I was also a stand-up, they didn’t believe me. One of them said, “No, you’re not one of us. You are way too happy.”

This accusation has followed me for years like a curse—the curse of being “too happy.” The truth is, I am a very happy person. Whether it’s in a joke, a song, or something funny a friend said, I feel entitled to be happy. President Dieter F. Uchtdorf said, “We were created with the express purpose and potential of experiencing a fulness of joy. Our birthright—and the purpose of our great voyage on this earth—is to seek and experience eternal happiness.”

Before I got married, I was very happy—so happy I thought maybe I didn’t even really need to get married. I had an awesome job at The Daily Show with Jon Stewart, I lived in the greatest city in the world, New York City, and I had friends and family I knew I could always count on. I was fine, perfectly content. Plus, dating was hard! And more often than not, it caused me pain. So when I met my husband, I wasn’t looking for a relationship. In fact, I blew him off at first. Thankfully, he was persistent and we ended up going on a date. He was my age, we had more in common than I ever imagined, and dating him felt so right. But that didn’t mean I wasn’t nervous about marriage. The problem with having all this happiness was that I was afraid of losing it. I didn’t understand that there was more of it in store for me.

A week after my husband and I were married in the Provo Utah Temple of The Church of Jesus Christ of Latter-day Saints, we found ourselves starting a new life in a new city. Moving to Los Angeles from New York City and giving up what I thought was the perfect single life was a challenge. It was so much change so quickly! I was afraid of losing my identity. I was in an unknown place with no job. It could’ve been really easy to slip into a depression. However, I kept going.

I started doing stand-up again, I wrote, joined a gym, made some friends, and served in my new congregation. And best of all, every day I got to hang out with my best friend, my husband. Marriage was awesome! I felt more confident every day, knowing I had someone who knew me so well, who had my back, and who supported my goals. While I look back on my single life and remember it fondly, it doesn’t compare to the happiness I feel now, knowing that I am married to my husband forever. Instead of feeling like I gave up my life in New York City, I have new goals and dreams. My career took off, and as of now, I’ve accomplished more than I ever thought I would.