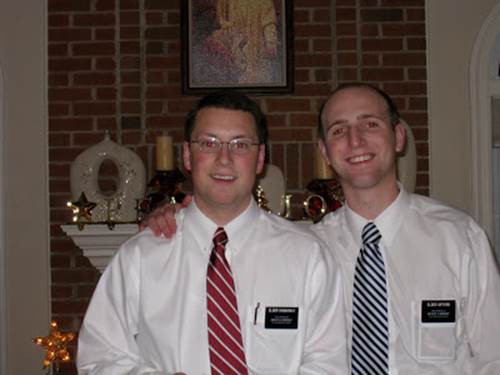 The Conversion of Rosine in her Native French Language

One day while serving in Virginia, my companion and I were tracking a neighborhood of town homes.  We found the neighborhood to be especially fruitful.  We made several return appointments and also met several potential investigators.

As we went through our planners a few days later and called some of the people we had met, only a few folks wanted to see us.  We did our best to make an appointment with everyone we could.  One of the appointments was with a young woman from Rwanda named Rosine. When we came back, she let us in.  Her aunt and uncle were also in the room.  After we sat down, we discovered that they spoke very little English, only French.

Since we couldn’t teach in English and had no French speaking missionaries in our mission, we decided to play the Restoration DVD in French mode.  That was the only material we had with us in the French language.  They liked the video presentation and invited us to come back in two days.

When we returned, we brought along a French copy of the Book of Mormon.  We taught Rosine, who had immigrated to America to escape the atrocities which had occurred in Rwanda, the gospel lessons basically by simply pointing at different verses in the French Book of Mormon and then letting her read out loud each assigned verse.  Our ward later supplied us with two French speakers who also helped us immensely with our teaching the lessons in Rosine’s native language.

We then found a recent convert in our ward from the Congo who also spoke French and was about the same age as Rosine.  We even had a lesson one day where we just read together Elder Uchtdorf’s talk entitled, “Faith of Our Father.”  We gave Rosine a French copy of the sermon to read along with us.

The next Sunday she came to Church and was very, very excited.  She was baptized 2 weeks later.  She has a powerful testimony of the restored gospel, has since learned English and still maintains contact with me after I was transferred from her area.

The Book of Mormon is such a powerful tool for conversion.   I am thankful for its converting power, and am grateful that so many church members are willing to share their ability to speak a foreign language so that missionaries throughout the world can teach the gospel in the native language of their investigators.

So great you were going the extra mile to teach her in French, when neither of you spoke French. Your ideas were inspired.