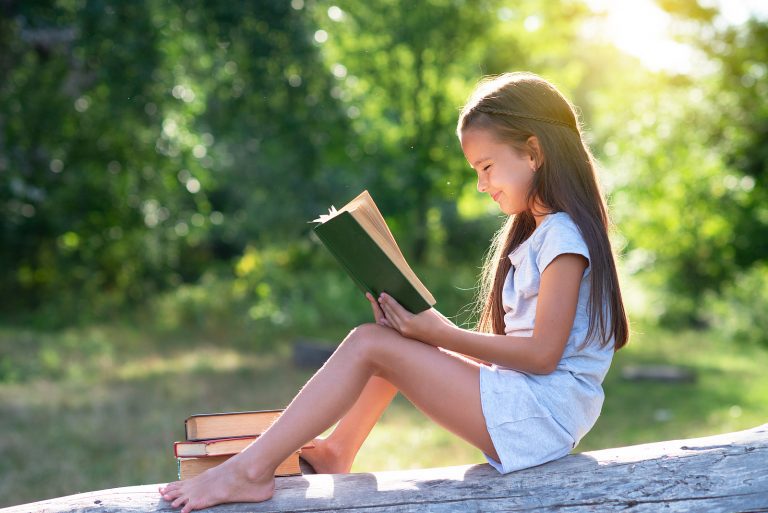 Those long hot days of summer have finally arrived.  These summer days are some of the best times to wrap yourself inside a great book.  The following books include several genres and should grab your nine-year-old and older and keep him/her interested to the end and likely excited to read!

The Day I Was Erased, by Lisa Thompson, is a book rich with many elements.  Some of the themes include family, Alzheimer’s and the feeling of belonging.  Maxwell seems to continually get in trouble at school and life at home is difficult.  He feels like he has his dog and Reg, his friend who is an older neighbor with Alzheimer’s.  But his life is about to take a sudden change when he complains to Reg and wishes that perhaps life would be much better if he wasn’t even born.  After leaving Reg’s House, he soon discovers that his life has been erased – his wish has come true.  Initially Maxwell feels that this is a great situation because no one is yelling at him anymore.  But he misses his life and now wonders if he can get his life back.  This well written story brings out the importance of appreciating all that surrounds your life.  Be sure to check out the author’s other outstanding book, The Goldfish Boy.

Untwisted (Twinchantment Series), by Elise Allen, is actually book #2 but reading book #1 isn’t necessary to completely enjoy this delightful book.  Princesses Flissara and Sara are attempting to bring magic back to their kingdom.  When both girls go to Maldevon Academy, they are able to mix with both magical and non-magical students.  But problems ensue when the girls begin to drift apart and unusual things begin to happen.  The book is very engaging and a mystery involving happenings at the school will definitely keep pages turning clear to the end.

Every Missing Piece, by Melanie Conklin, is a well-paced tale that nicely incorporates a mystery, family life and friendship.  Maddy is still dealing with her father’s death even though it happened three years before.  But now with her mother remarried she is supposed to spend more time with her stepdad.  When she meets a boy setting traps in the North Carolina woods the mystery begins.  She believes this is the boy who went missing the previous fall.  There are many pieces of this story that begin to finally come together near the end of the book.  The author’s writing is so descriptive with metaphors and enacting adjectives that you will become a part of Maddy’s life in the woods.

Connect the Dots, by Keith Calabrese, follows two 6th graders as they begin middle school. As they experience different classes, lunchtime thievery and free beef jerky, they notice a mysterious new girl who seems to know so much about each of them.  This is when the mystery begins.  It is also the beginning of the theme of the story and how the title ties in with the book.  This extremely well written story has many small intricate details that begin to connect as the mystery unravels.  The story is well executed and would make a wonderful read-out-loud.

Hello from Renn Lake, by Michele Weber Hurvitz, is a story rich in friendship and about helping the things you love.  Annalise’s family owns cabins by a beautiful lake, and this is the summer she gets to help out which means she’ll be able to spend more time by the lake she loves.  When she was very young, she discovered that she has a special gift with this lake.  She can sense the feeling of the lake and this summer there is something very wrong with the lake.  As Annalise begins to unfold the problem with the lake, you learn much about the fragile balance of the earth and become more appreciative of God’s green earth. There is more information found at the back of this book.

A Guard Dog Named Honey, by Denise Gosliner Orenstein, is not your typical dog-lover book.  Bean lives on an island of a coastal state which caters to the rich during summer months.  Bean lives with her mom and older brother in a small modest house where her mom barely makes enough money to pay the bills. When Bean finds her brother has gone to jail for stealing a car she is determined to bail him out.  But there is no extra money.  She sets out to befriend a rich girl, Phoebe, who lives in one of the mansions.  Phoebe has a very large guard dog, Honey, who is worth a lot of money.  Perhaps Bean can convince her new friend to sell the dog and then use the money for the needed bail.  But this plan becomes very complicated.  Bean doesn’t count on Phoebe actually becoming a friend.  And worse than that, she falls in love with Honey.  This wonderfully written story will grab your heartstrings and never let go.

All the Colors of Magic, by Vaija Zinck, is full of adventure and magic.  Penelope has always had gray hair making her seem peculiar to all.  She has always felt a bit different.  Furthermore, she seems to always know what her mother is about to say, and it rains every year right on her birthday.  But when Penelope wakes up one morning, she discovers her hair has turned a bright red.  This is when her mother tells her a secret. Penelope’s father isn’t dead.  He is a wizard and now she must search the world over and find him.  This is the beginning of many adventures that await Penelope.

The Incredibly Dead Pets of Rex Dexter, by Aaron Reynolds, is a hilarious romp that will likely have you laughing out loud!  The story begins with the fact that all Rex wants is a dog.  But instead, he receives a chicken.  However, just a short time later in that same day, the chicken is run over by a large steam roller. Now Rex is being haunted by that chicken along with a slew of other animals recently expired from the zoo. He finds the way to be rid of these ghostly animals is to solve the zoo mystery.  It may seem that this is a darkish type of theme, but this delightful and well written story will lead to smiles and even giggles making this a perfect read-out-loud!