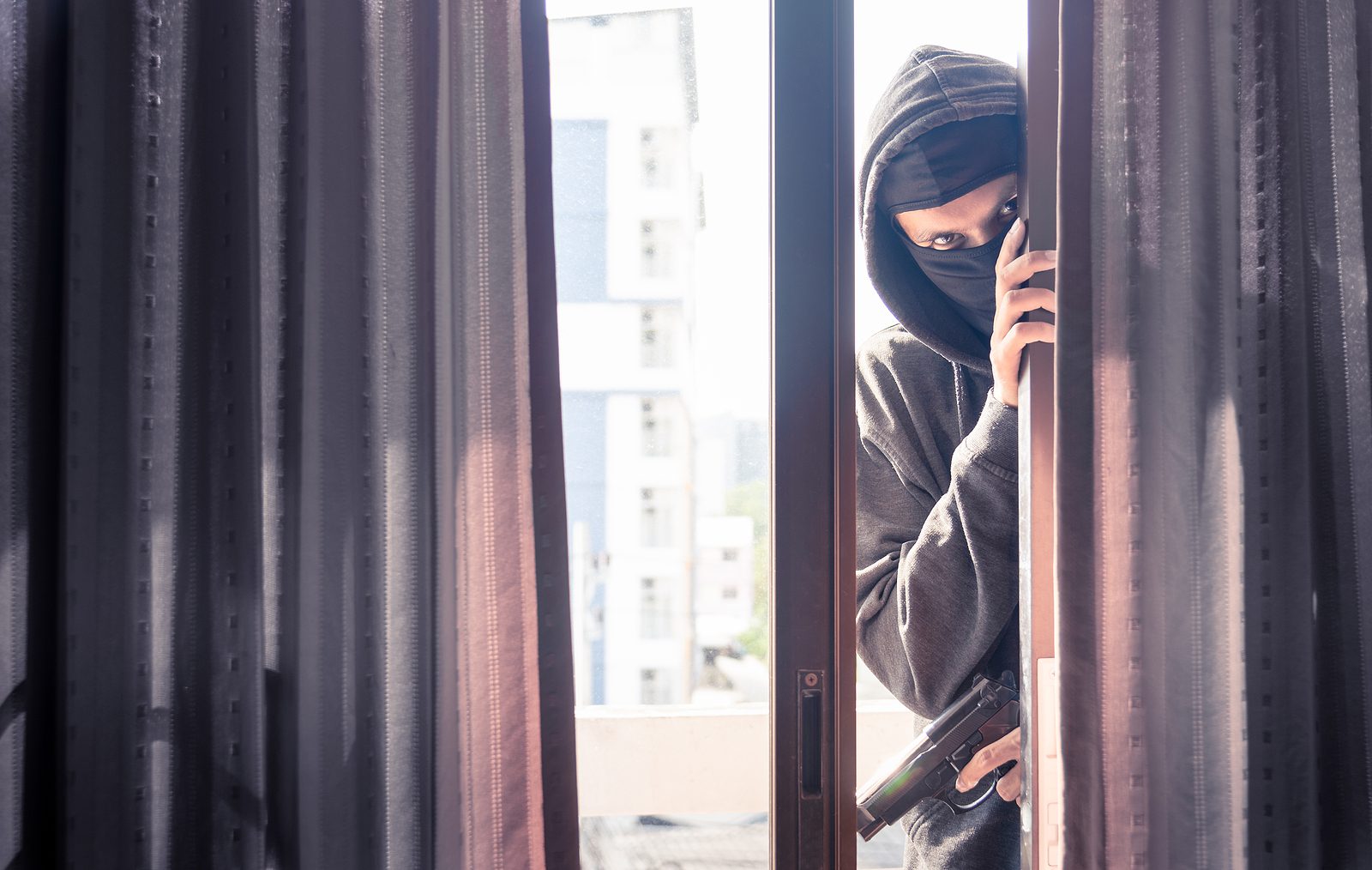 38 years ago, a convicted rapist and murderer escaped from the Atlanta Federal Penitentiary and led the state authorities on a long chase.  He was followed by helicopter, but the police lost his trail at the intersection of I-85 and Peachtree Ind. Blvd.  At that point, they began searching the surrounding neighborhoods both on the ground and in the air.

I was home alone with my newborn baby, Scott. My two oldest girls were in school.  My 3-year old son, Jay, was at Joy School, which was held at my friend, Barbara’s home.

I was using this time alone to work on a birthday present for Jay.  I was making him a quilted wall hanging of a dinosaur, as he was crazy about dinosaurs.  It was almost finished; I only needed to do some hand sewing to close off the last seams.  It was hard to find time to work on this when he wasn’t around.

After putting baby Scott down for his nap, I went right to work in my master bedroom upstairs, where I kept the quilt hidden underneath my bed.  I was determined to finish this project and didn’t even take time to turn on a radio.  I was watching the clock very carefully, because Barbara was very particular that the children be picked up exactly at 12:00.  To be there by 12:00, I would have to leave my home at exactly 11:45.  It would be a race to finish the wall quit before 11:45.

I heard some funny sounds down around my front door. I convinced myself it was just neighbor kids playing around.  Besides, I reminded myself, I had locked the front door. Then it sounded like there was actually someone in my house, but I told myself it was probably just squirrels running around on my roof.  I kept working.

I heard my dog, who was tied up in the backyard, barking ferociously and wildly lunging against his chain.  Normally I would have checked on him, but I didn’t want to stop working.  I could hear helicopters overhead, and I told myself that my dog was probably barking at the helicopters.  About 40 minutes went by.

At exactly 11:40 I tied off the last knot, tossed the quilt under my bed and headed for my closed bedroom door.  I would quickly wake up baby Scott, (asleep in his bedroom at the end of the hall) get him into the car and head off to pick up Jay from Joy School.

As I reached for my bedroom doorknob, baby Scott let until a shrill shriek from his room down the hall.  I could literally hear a man catch his breath and utter a curse on the other side of my door!  Then I heard him running down the staircase, heard the front door flung open, and then all I could hear was Scott crying loudly.  This all happened in the blur of an instant.

Startled and afraid, not knowing if this person was still in my house or not, I opened my bedroom door and ran down the hall to grab Scott from his bed.  As I passed the front entryway, I could see my front door standing wide open. I quickly picked up my screaming baby, rushed downstairs to the basement level, got into my car and went to pick up Jay from Joy School.  Seriously!!!  This was long before cellphones and I didn’t want to stop in my house to call the police because at that point I didn’t know if an intruder was still there.

When I got to Barbara’s home, we called the police.  I returned to my house to find six police cars gathered around my home.  As I emerged from my car, they shouted, “Are you okay?  Where is he? Which way did he go?”  I explained to them that I had left to make the call.  The policemen all jumped into their cars and tore off down the street, with the exception of two policemen who stayed to get my story.

That night we watched the story of the escaped convict on the evening news.  The next day when the police called, the story emerged.  The police figured the escaped convict broke into my home, to hide from the overhead helicopters (the lock on my front door had been jimmied). Hearing nothing, he probably assumed no one was home.  After about forty minutes, not hearing any more helicopters, they think he went upstairs to try to find clothes, cash, etc.  He was standing ready to open the door to my bedroom when baby Scott inexplicably let out his sudden cry.  Suddenly realizing there was someone at home, and not wanting to be seen, the convict then tore down my stairway and out the front door, leaving the door wide open.

As it was, although we stood only six inches apart, I never saw him.  He was caught the next day.

The timing on this had to be perfect!  If he had come up to my room even one minute earlier, he would have found me alone in my bedroom.  Who knows what would have happened?  If Scott had not screamed out at the exact instant he did, the door would have been opened and the convict and I would have been standing face to face.  I felt that I was truly protected by guardian angels that day!

Floyd Westin once commented that when we pop on the scene of a bad traffic accident, because of the trauma, we tend to continue onward at a much slower pace.  But then we gradually forget the trauma and soon pick up speed until we’re traveling at the same speed as before the accident.  This usually happens within minutes, or even seconds.

It’s the same thing in life.  After this experience with an intruder, I lived full of gratitude.  I felt that each day was a blessing that I might have not had if my son had not miraculously cried out at the perfect moment of time.   But I gradually forgot the miracle in the rush of everyday life and today often find myself complaining to God about my struggles.  The truth is—I’m lucky to be able to have struggles!!

I once read a book called, Every Day Above Ground is a Good One!  It was written by a Christian author who lost two sons in two different car accidents within a year.  Her third and last son decided to take a different path in life, in conflict with the family value system.  It would have been easy for her to bitterly complain about the unfairness of life and live a life of depression.  But she remembered the wonderful Atonement of the Lord, Jesus Christ, and that became the impetus for living each day with joy.

Another wonderful book called Each Day a Bonus, written by Louise Lake, a woman stricken with polio while on a youth trip to Nauvoo, also teaches that we can learn to live with joy in spite of life’s challenges and unfairness.   After spending weeks on an iron lung, Louise was left paralyzed. Her husband abandoned her.  She was left alone and in poverty.  She lives every day in pain.  Yet she radiates joy.  You can’t read her book and not feel that we all have a reason to live with joy.

So maybe we can all look back and remember—remember how blessed we really are.  Yes, we are stuck in our homes through social distancing.  We’re missing planned vacations, graduations, friends, church, weddings and all kinds of special activities.  Our missions and college plans are all askew.

But, Hello!  We’re ABOVE GROUND and each day is truly a bonus!  If we can remember to be grateful, we can actually live these days with joy.  I, for one, am going to try to stop whining so much!

Carlie, I have been a great fan of your father's for years, even though I never met him!! As a young missionary, one of my companions had a tape of the Stake Conference where he gave his famous 17 Points of the the True Church Discourse. We played it for so many investigators that we completely wore the tape out! His amazing story and testimony were the "closers" for us when we had an investigating family close to baptism. Two of those families from Richmond were ministers, (one Methodist and one Episcopal). Both families joined the Church after hearing your father's testimony. They later both served in a Bishopric and one served in the Stake Presidency. I suspect your father's testimony played a part in an amazing number of conversions over the years. I also used his story for years as I taught early morning seminary and in the Young Women's organization. What a pleasure to hear from you! Becky Douglas

Love the article and the reminder to be grateful every day for tender mercies. Floyd Weston is my father and I appreciate you sharing one of his lessons.