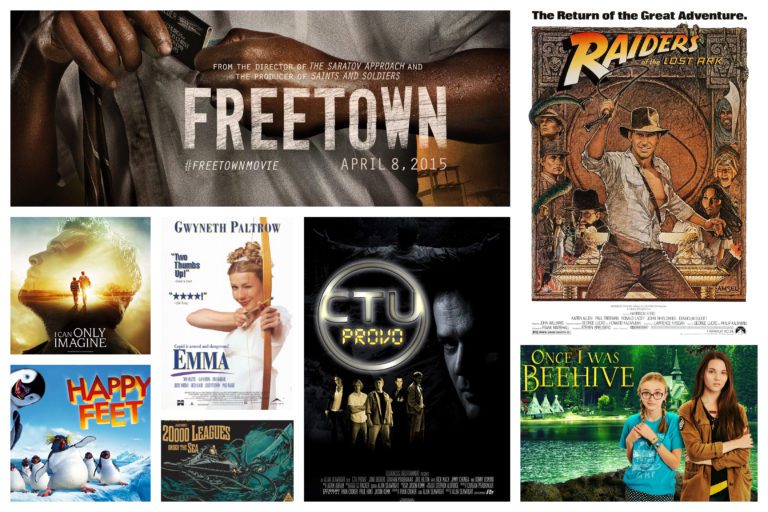 “One can still find movies and TV comedies and dramas that entertain and uplift and accurately depict the consequences of right and wrong… Our biggest challenge is to choose wisely what we listen to and what we watch.” – M. Russell Ballard, Apostle of Jesus Christ.

The weekend is here! Let’s help you find the good stuff to watch at home. For more curated picks and discussion guides for movies, like me on Facebook.

Freetown, from director Garret Batty (The Saratov Approach, Out of Liberty) is a harrowing true story of African Latter-day Saint missionaries fleeing to freedom and safety during a brutal civil war. Rated PG-13 for intensity and themes involving genocide (though the film abstains from graphic imagery). Good for teens and up. Well-acted and inspiring. If you struggle with the accents, use the English subtitles.

The Mandalorian, from Iron Man director John Favreau and The Clone Wars producer Dave Filoni, tells the story of a bounty hunter in the Star Wars universe five years after Return of the Jedi. It’s got a Western vibe and a tough hero with a hidden heart of gold. Huge budget, engrossing story, what’s not to love?

Raiders of the Lost Ark, the first and arguably best in the Indiana Jones series, finds the intrepid archeologist racing Nazis to the biblical Ark of the Covenant. An absolute classic that actually does a decent job staying true to the Bible (see below), Raiders of the Lost Ark is rated PG, but that’s because there was no PG-13 when it came out in 1981. There is some charmingly hokey blood and gore, a few moderate profanities, and a scene where Marion kisses Indy in bed but he falls asleep before anything happens. Maybe I’m biased because of my childhood, but I say it’s good for older kids and up.

Emma is a charming adaptation of the classic Jane Austen novel, about a Victorian matchmaker who almost misses her chance at love because she’s too busy meddling in the love-lives of her friends. With Gwyneth Paltrow and Ewan McGregor. Rated PG for mild language.

I Can Only Imagine is a powerful true-story Christian drama, about a musician from a broken home who reconciles with his abusive father (Dennis Quaid). A beautiful story of forgiveness and repentance, with excellent music. Rated PG for thematic elements involving abuse.

Once I Was a Beehive is one of the few Latter-day Saint comedies which is actually funny. I had low expectations and was blown away by this thoughtful, smart, character-driven story about a grieving teen not of our faith who joins her friends for “girls’ camp.” Far from a conversion piece, it’s truly a tale of interfaith friendship. Watch it free on YouTube here. Rated PG for an intense moment with a bear, but nothing offensive here.

Happy Feet is the story of a penguin who doesn’t fit in in his colony of vocally talented birds; he’s a dancer. Sounds silly, and it is, but it’s also a lot of fun, with killer music and animation and the talented vocals of Robin Williams, Hugh Jackman, Nicole Kidman, Elijah Wood, and more. Rated PG for very mild innuendo and moments of peril.

20,000 Leagues Under the Sea is a Disney classic, based on the Jules Verne novel about Captain Nemo and his submarine, exploring the oceans before anyone else did, but possibly with ulterior motives. Kirk Douglas shines as the hero and the giant squid scene is epic. Rated G. Good for all ages.

In 2008 I starred in a comedy in which terrorists threaten Utah and average Joes try to stop them. Donny Osmond plays the villain, and he’s brilliant! Watch the trailer for CTU: Provo above and enjoy the whole movie here.

Does any lds group have a site to watch LDS movies kinda like Netflix does, but with LDS or other worthy content? Would that be a viable venue? We would love to watch some of the movies but only find the trailers and would rather not pay to watch each film separately.