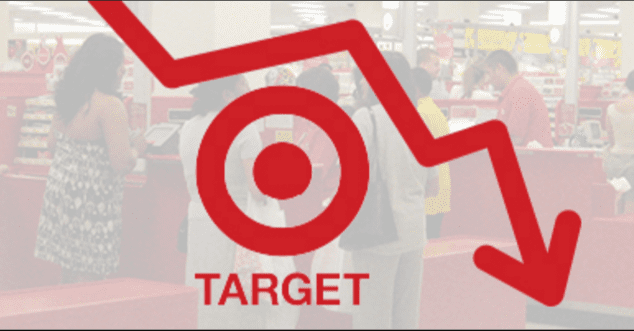 The following comes from the Tony Perkins and the Family Research Council:

Just when you thought the news for Target couldn’t get any worse, it did. Turns out, families aren’t the only ones dumping the retailer — so are shareholders. In a report that’s “rattling Wall Street,” Target’s worst fears for the fourth quarter came true, with a stunning 43 percent decline in earnings. For the LGBT ally, the bleak outlook won’t improve any time soon. Already, executives are warning of an “awful 2017,” thanks to the unpopular decision to turn fitting rooms and restrooms into a predator’s paradise.

Now that the stores are gender-free, they’re also becoming profit-free! When the numbers hit the wire, the Minneapolis-based company watched stocks take another tumble, dropping 13 percent before today’s opening bell. CEO Brian Cornell, who saw shares freefall from more than $84 to $59 in a matter of months, has tried everything to revive sales — except the most obvious: nixing its unsafe bathroom and changing room policy. As usual, Cornell tried to deflect attention from the boycott and claimed, “Our fourth quarter results reflect the impact of rapidly-changing consumer behavior, which drove very strong digital growth but unexpected softness in our stores.”

That’s interesting, since this “rapidly-changing consumer behavior” hasn’t affected Wal-Mart at all. In fact, sales at the retailer’s biggest competitor are climbing — and fast. Although Target’s team may be in denial about the boycott’s impact (at least publicly), investors agree “it’s at least part of the reason Target’s top line has been dwindling for most of the past few quarters.” And based on the latest polling, it’s no wonder. Americans by a two-to-one margin oppose extremism like Target’s. They overwhelmingly support common-sense bathroom, shower, and locker room policies that put safety and privacy first. Still, groups like the NCAA and NBA continue to thumb their nose at consumers and chase agendas that show just how far outside the mainstream they are. And what has it gotten them? A decline in respect — and more importantly, revenue.

Target stock has gone back to the norm. Target also does not have gender neutral bathrooms. Even so, except in the men's room where their are urinals, all the commodes are in private stalls. The biggest problem is the homophobia expressed in anti-target actions. Target treats its employees far better than any other competitor - Kmart, walmart, etc.

NDudley, I just want to be able to use public restrooms without people staring at me and trying to imagine what I look like while doing so. That's why I'm glad that places like Target let me do that. No one ever said I was allowed to abuse anyone. I just don't want people peeking in my stall to try to find out if I'm a "creep" or not, while not realizing what that word means.