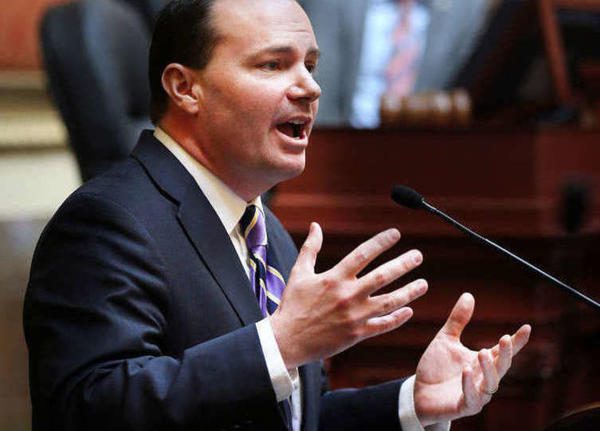 Senator Mike Lee (R-UT) delivered a tribute yesterday, to the late Elder Richard G. Scott on the Senate Floor. The speech was delivered at approximately 11:20 a.m. MT and was aired on C-SPAN2.

The full text of the remarks can be found below: Mr. President,

I rise today to pay tribute to Elder Richard G. Scott, a member of the Quorum of the Twelve Apostles of the Church of Jesus Christ of Latter-day Saints who passed away September 22, 2015, at the age of 86.

Richard G. Scott had the razor-sharp mind of an engineer fused with the tender softness of a disciple’s soul. A graduate of George Washington University in mechanical engineering, who did post-graduate training in nuclear engineering, he had a brilliant mind with an uncanny capacity for formulas, projections and calculations.  Yet, he became known throughout the world for an enormous heart with an equally uncanny capacity to love and have empathy for people from every walk of life.

Elder Scott’s gentle voice invited all who had lost their way, given up hope, or wandered far – to come home – home to the faith, family and community that would bring them real peace and lasting joy.  Countless individuals around the world heard his invitation to come home and rightly felt that he was talking directly to them.  Ever in search of the one who was lost – Elder Scott’s words and witness of Jesus Christ served as the lower lights upon the shore to gently guide many a wanderer home.

Elder Scott had an extraordinary depth of empathy, particularly for those who silently suffered and anxiously sought for relief, redemption and renewal in the midst of life’s storms.  He was himself a man acquainted with grief, having lost two young children and later his wife Jeanene to untimely deaths.  He also seemed to intimately understand the feelings of deep discouragement, overwhelming uncertainty as well as the crushing avalanche of personal inadequacy that can descend upon the soul during difficult days and trying times.  Yet he continually stood as a beacon of hope to those who struggled because he knew with certainty to what source we should look for strength and security during such days and at such times.

His complete love for and belief in the divine potential of each and every soul led him to speak plainly, powerfully and often with tender personal pleadings.  He urged the struggling, as well as the faithful, to cast aside any behavior, habit or belief that weighed them down or kept them from living up to their full potential.  Members of the LDS Church around the world often felt as they watched him speak that he was not only speaking specifically to them but he was also looking straight into their souls.  In truth, he was really just speaking with such love, empathy and compassion that he empowered his listeners to look into their own hearts and see what their Savior saw.

Elder Scott saw people not for where they were currently positioned on the road of life, but for the potential each person had to do, be and become more. He once declared, “We become what we want to be by consistently being what we want to become each day.”  Elder Scott’s vision extended far beyond the struggles of mortality; he focused on raising our sights to higher things, grander places and more noble thoughts.

The role of the family as the bulwark of society was paramount in his life and teachings. Elder Scott often expressed his belief in the unparalleled power and influence that a man and a woman, equally yoked as husband and wife, could have on children and communities. He taught that in marriage oneness is not sameness and of the vital importance of valuing our differences.  To illustrate, he once declared, “I may not know what it means to be a woman, but I do know what it means to be taught by one and to love one with all my heart and soul.”  His love for his wife, Jeanene was legendary and was forever sprinkled into his sermons.   I take comfort in knowing that after nearly twenty years Elder Scott has gone to that heavenly home he so often pointed to and is once again united with his Jeanene.

One of Elder Scott’s colleagues described him as a “clever teacher.”  His formula for teaching was not of the engineering variety, but rather, followed a pattern described in a hymn by Lorin Wheelwright titled, “Help Me Teach With Inspiration,” which says:

Help me teach with inspiration; Grant this blessing, Lord, I pray.

Help me lift a soul’s ambition To a higher, nobler way.

Help me reach a friend in darkness; Help me guide him thru the night.

Help me show thy path to glory By the Spirit’s holy light.

Help me find thy lambs who wander; Help me bring them to thy keep.

Teach me, Lord, to be a shepherd; Father, help me feed thy sheep.

Elder Richard G. Scott was indeed an inspired teacher, leader and lifter of people.  His amazing mind and compassionate soul enabled him to help engineer a path for all of us to return home.

May your extraordinary tribute to a favorite teacher & leader find a resonance in the lives of your Senator audience.