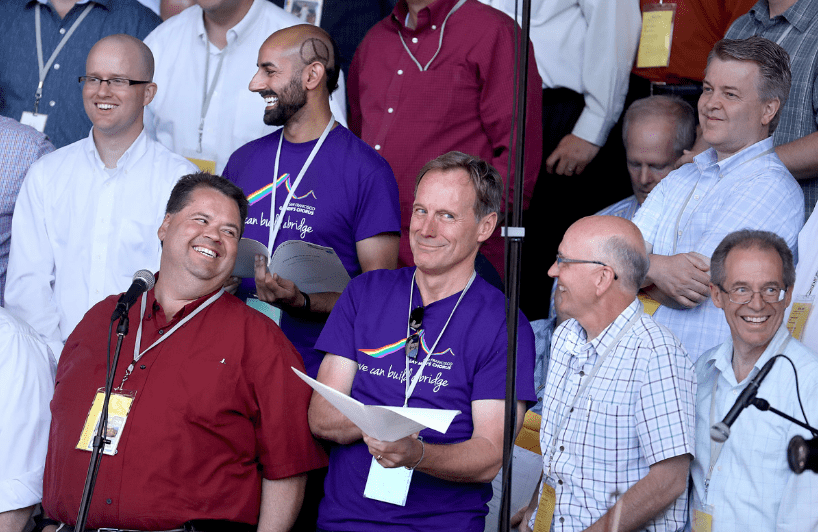 When Dr. Timothy Seelig, the artistic director of the San Francisco Gay Men’s Chorus, first heard his organization was being invited to perform with the Mormon Tabernacle Choir, he guessed it was a prank.

But he soon learned the invite was legitimate — and he was quick to accept.

The veteran choral leader knows music is often called a universal language, but it is also a global unifier. It can bring people together who may seem at odds.

Music’s unifying power was on full display Monday here on the stage of the Shoreline Amphitheater in Northern California. Standing shoulder to shoulder for a sound check rehearsal was the Mormon Tabernacle Choir and several members of the San Francisco Gay Men’s Chorus.

It wasn’t hard to spot the men from the chorus; they were the ones wearing purple T-shirts with the name of the organization emblazoned across their chests.

But otherwise, they blended in with their fellow performers as choir conductors Mack Wilberg and Ryan Murphy led them through segments of songs to be performed at Monday night’s concert, the fourth stop of the choir’s 2018 Classic Coast Tour.

“I believe music is universal … so this opportunity is a blessing,” he said. “I am not surprised that music can bring two different communities together.”

It was 10 years ago that the church that the choir represents supported Proposition 8 in California affirming the definition of marriage as between a man and a woman. The proposition was supported by voters but later overturned by judges. The church was both supported and criticized for its efforts, but it became a wedge issue between many in both the gay community and the church community.