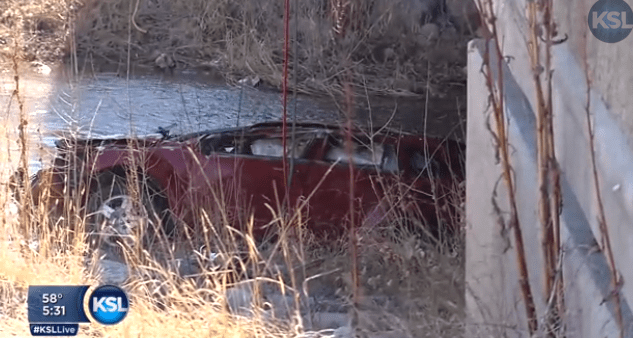 The following story was reported on KSL. To read the full article, click here.

“We’ve gotten together and just talkin’ about it, and all four of us can swear that we heard somebody inside the car saying, ‘Help,'” officer Jared Warner recalled Sunday.

But when they flipped the vehicle resting on its hood in the Spanish Fork River onto its side Saturday, they discovered there was no one inside able to speak.

“The only people in there were the deceased mother and the child,” said officer Bryan Dewitt.

“We’re not exactly sure where that voice came from,” Warner told the Deseret News.

But because of the actions of those officers and several Spanish Fork firefighters, 18-month-old Lily was rescued. She remained at Primary Children’s Hospital Sunday in critical condition but was reported to be stable.

Police belive Lily was upside down, strapped in her car seat for up to 14 hours. Her mother, Lynn Jennifer “Jenny” Groesbeck, was killed in the crash.

Sunday, flowers and a wreath were placed on a dirt pile near the embankment where Groesbeck is believed to have vaulted off of and into the river.

To read the full article and see the report, click here.