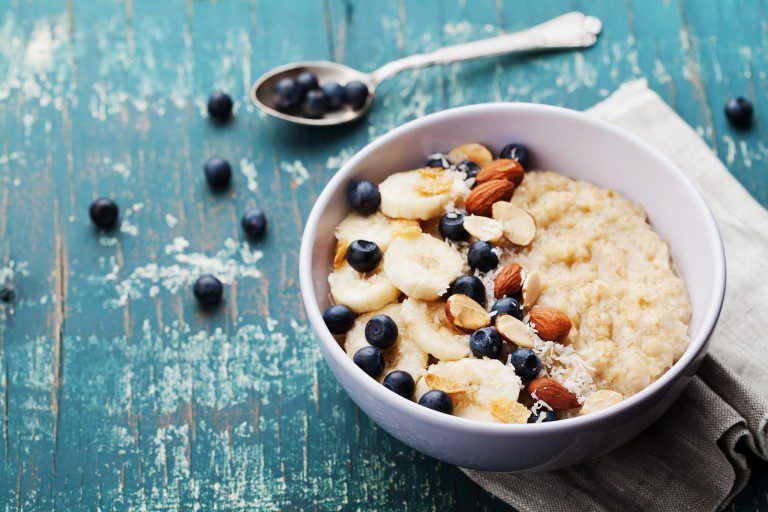 Putting the “Oh!” In Oatmeal

Brrr! Baby it’s cold outside! The perfect time for oatmeal for breakfast … or lunch or even a simple supper if you know how to prepare it and revel in its goodness. My husband, Bob and I (we’re in our mid-sixties), enjoy it so much that we eat it almost every day year round.

As our health thrives and we enjoy abundant energy, we’re beginning to think our daily oatmeal might be playing a part and is worth talking about. If you’re not enjoying oatmeal often, the information and recipe ideas below confirm it as a rockstar in the food world for taste and nutrition! Oatmeal is, as an old friend used to say with gusto to her children, “Nutritious, delicious and makes you feel ambitious!”

Please note that the the instant “packets” are processed to include flavoring and sweetening. They have practically ZERO nutritional value. We’re talking the real stuff in this article, cooked from scratch — although it only takes 5-8 minutes on the stove.

Our favorite specialty oatmeal is from a popular chain in Utah called “Kneaders.” We think we’ve mastered (and even improved) their recipe that I’ve included below.

Kneaders oatmeal is marvelous and cooked from scratch to serve throughout their morning breakfast hours. Their options are banana walnut, cranberry pecan or plain. We punch up the nutrition and flavor satisfaction at home with ch-ch-ch chia seeds and pumpkin seeds that are raw and unsalted. They are easy to find at the grocery or health food store. Just make sure they’re not roasted or have a lot of other processing or salt.

To start with, it tastes so delicious every day (almost like a dessert) and holds us for hours. It only takes 5-8 minutes to cook. A large container costs less than $3 and has 30 servings, compared to cold cereal that costs more than twice as much per serving. For those reasons alone it’s a great breakfast.

There is little solid evidence about the first record of oatmeal being consumed. Archaeological studies have found references to oats dating as far back as 2,000 B.C.   However, these oats were not likely consumed in the same way we eat them today. After 2,000 years of cultivation, oats were finally brought to Europe.

The Romans and Greeks considered oats to be a rancid form of wheat, which is why so many nations believed oatmeal to be more suited as animal feed. For a time, oats were considered to be weeds!

Before oatmeal became a popular breakfast cereal or baking ingredient, oats were most likely used for medicinal purposes. Eventually oatmeal became popular as a breakfast food in Germany, Ireland Scotland and Scandanavia.

Oatmeal became so common in Scotland that households had ‘porridge drawers. They’d store porridge so that it could solidify and be eaten as an oatmeal bar. The Scottish eventually brought oats to North America in the 17th century

After doing a little research on oatmeal, I’m beginning to think I could write a book rather than an article! (I’ve summarized some of the fascinating information from an in-depth article, which you can read by CLICKING HERE.

Now for just a little bit of what it does for us:

Oatmeal is full of antioxidants, which are designed to keep your body healthy. Antioxidants are essential to a healthy diet.

They protect the body from harmful molecules called free radicals (or oxidants). These antioxidants contain many different vitamins and minerals (such as vitamins E and C and the mineral seleniu to name a few.

Fiber is essential for getting things moving in your intestines. The insoluble fiber found in oatmeal will absorb water that will then swell the trapped stool. Once the stool is swollen with water, it will become soft and easier to pass. What’s not to appreciate with that?

Oats are high in fiber and studies show that a high-fiber diet may reduce your risk of diabetes by over 30%.

For those of us who have chosen a whole food, plant-based way of life, we are often asked “how do you get your protein?” Oatmeal, take a bow!

Protein is essential for a healthy human body for nails, hair, bone, skin, blood and muscles. It assists every single cell in the body. One cup of dry oatmeal contains 12 grams of protein, which makes it a perfect addition to your diet.

While oatmeal is awesome just by itself with fresh fruit or nuts, we’ve pushed it to a higher level with a daily tablespoon of pumpkin seeds and ch-ch-ch chia seeds. The important thing is that the nuts or seeds you add are raw and unsalted

Plus pumpkin seeds taste great! mixed into your oatmeal. That little chewy crunch is awesome.

Who doesn’t remember the Chia pet commercials.  What a catchy jingle!  Somebody made a fortune on that, but the real fortune is for your health when you eat them!

Like oatmeal, they’ve got a cool history as well.  In the Mayan language, “chia” means “strength.”   Dr. Axe, one of my favorite natural health gurus, has a fascinating write-up on these little gems. He says:


Originally grown in Mexico, the seeds were highly valued for their medicinal properties and nutritional value. In fact, they were even used as currency.

The chia seed is nutrient-dense and packs a punch of energy-boosting power. Aztec warriors ate chia seeds to give them high energy and endurance. They said just one spoonful of chia could sustain them for 24 hours. Chia seeds were known as “runners’ food” because runners and warriors would use them as fuel while running long distances or during battle.

Not only that, but recent research has found that the chia seeds benefits are even greater than we realized.  They support healthy skin, reduce signs of aging, nurture the heart and digestive system, build stronger bones and muscles.  They’ve even been linked to helping reverse diabetes!

His entire article that is much more detailed (but well written and still a quick read) is HERE.

Years ago, before we gave up cow’s milk, we used that and sweetened our oatmeal with (gulp) sweetened condensed milk and sweetened coconut. Yikes!!! It was more a dessert than anything and a splurge on Saturday mornings. We’ve made lots of changes so that now it is so healthy we fix it nearly every day.  It’s still delicious enough to feel like a splurge.

In a medium saucepan, bring all ingredients to a gentle boil on the stove top and simmer for a bit to thicken. Stir often.

Then add your walnuts, raisins, unsweetened coconut and whatever else makes your day!

Our favorite healthy sweetener from the health food store is “Sucanat.” You can also order  it on Amazon.  Unlike refined and processed white cane sugar and brown cane sugar, but similar to panela and muscovado, Sucanat retains its molasses content.  That flavor is perfect on oatmeal!

I don’t know about you, but I’m hungry for my bowl of oatmeal and headed off to the kitchen to make some right now. Isn’t our Heavenly Father wonderful? It’s fun to make the most nutritious foods our most delicious foods!

Carolyn Allen is the Author of 60 Seconds to Weight Loss Success, One Minute Inspirations to Change Your Thinking, Your Weight and Your Life. She has been providing mental and spiritual approaches for weight loss success both online and in the Washington, DC community since 1999 presenting for Weight Watchers, First Class, Fairfax County Adult Education and other community groups. She and her husband, Bob, are the parents of five children and grandparents of thirteen They are now happy empty nesters in Jackson, Tennessee, close to Memphis, where they center their online business for Meridian’s amazing herbal detox. CLICK HERE

Just wanted to add that for those of us who choose a WFPB diet, chia seeds are a source of complete protein!

I suggest NOT stirring it because that's what makes it like thick pasty glue. Instead, turn the burner down a bit and let it cook until the liquid is nearly gone (before oats start sticking to the pan). This will make a very delicious NUTTY-tasting hot cereal. Then add in all the goodies! Yum!!