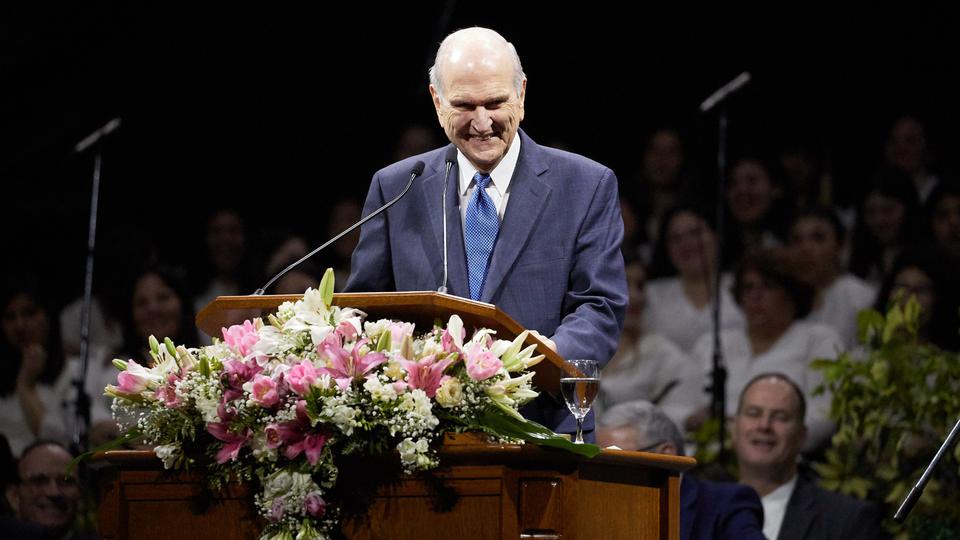 Thousands of members and invited guests of The Church of Jesus Christ of Latter-day Saints in Buenos Aires, Argentina, Wednesday night learned from their prophet how to obtain a peace so profound it can keep them calm in the face of certain death.

Speaking in Castilian Spanish, Church President Russell M. Nelson told of the time several years ago when he and others aboard a small plane survived the explosion of one of the plane’s engines, the plane’s ensuing fire and sharp nosedive toward the likely death of all aboard, and then the pilot’s miraculous emergency landing in a field after the speed of the dive extinguished the fire.

President Nelson told the Argentinian Saints of the unusual tranquility he felt as the plane spiraled toward the earth and some aboard shouted in fear of what was ahead. The source of his peace, he said, was his faith and the death-transcending power of the Christ-focused worship done in the Church’s temples. The Church teaches that these temple rites connect families together forever.

President Nelson said it is important that we consider the time we each have left in this life as a gift of God to be used wisely.

“My life and your lives have been preserved for a short season,” he said. “With that time, we have the privilege of working, living, loving and choosing. Part of that choosing is making the decision to participate in the sacred ordinances [or rites] of the temple. These opportunities have eternal consequences.”

The prophet’s advice for the people to be guided by God in their own lives was simple and familiar to Latter-day Saints around the world: keep the commandments of God, pray every day, worship regularly and pay tithes.

The global faith leader then reminded the Saints, as he has done several times on this five-country Latin America ministry, that Jesus Christ makes everything good possible.

“Please teach your children, and also each other, about the Lord Jesus Christ,” President Nelson said. “His Atonement is the most important event in the history of the world and is the foundation of our religion. All other things concerning our religion are secondary to it. The Atonement of the Lord assures us of the resurrection of the dead and it provides the way by which we can obtain eternal life.”

The South American country is the fourth stop on the five-country, nine-day Latin America ministry he embarked on last week with his wife, Wendy (whom he married in 2006), and Elder Quentin L. Cook of the Quorum of the Twelve Apostles and his wife, Mary.

“Despite the lack of righteousness in the world today, we live a sacred and holy time. Focus your goals on the temple,” Elder Cook said. He noted that in his lifetime, “no prophet has been closer to temples than President Russell M. Nelson. The Lord has prepared Him through many years of assignments to preside over the Church when temples will truly dot the earth in unprecedented numbers. He began his service as our prophet by addressing us from the Salt Lake Temple. He counsels us to begin with the end in mind and made it clear that the ordinances of the temple and the covenant pathway should be our primary goal.”

Since becoming the senior Apostle of The Church of Jesus Christ of Latter-day Saints, President Nelson has announced the construction of 27 new temples.

“Never wonder if being sealed to your spouse in the temple is important,” Sister Nelson said.

Sister Cook taught the Saints to value the most important things, such as faith in Jesus Christ and membership in the Church.

“We can be the happiest people in the world,” Sister Cook said. “The Lord has told us many times to be of good cheer. We have great treasure. The Lord explained to the Prophet Joseph Smith, ‘If you endure to the end you shall have eternal life, which gift is the greatest of all the gifts of God’ [Doctrine and Covenants 14:7].”

The meeting was broadcast to all congregations in Argentina.

Earlier in the day, President Nelson visited a humanitarian organization that provides wheelchairs to those in need. Before the devotional, he met briefly with a group of young single adults and attended a reception at that venue.

Monday evening, the prophet addressed a large audience in Quito, Ecuador (link). Over the weekend, he visited Guatemala City and Bogota, Colombia (links).

This is President Nelson’s seventh trip to Argentina. His first visit was in 1995 while serving in the Quorum of the Twelve Apostles. He’s the fourth prophet to travel to the country. President David O. McKay visited Argentina in 1954. President Spencer W. Kimball visited twice in the 1970s, and President Gordon B. Hinckley was there in 1996.

The senior Church leaders have visited Guatemala, Colombia, Ecuador and Argentina since they began their Latin America ministry on August 24. Their final destination is Brazil, where a devotional will be held at the Anhembi Convention Center in São Paulo. They return to Salt Lake City on September 2.