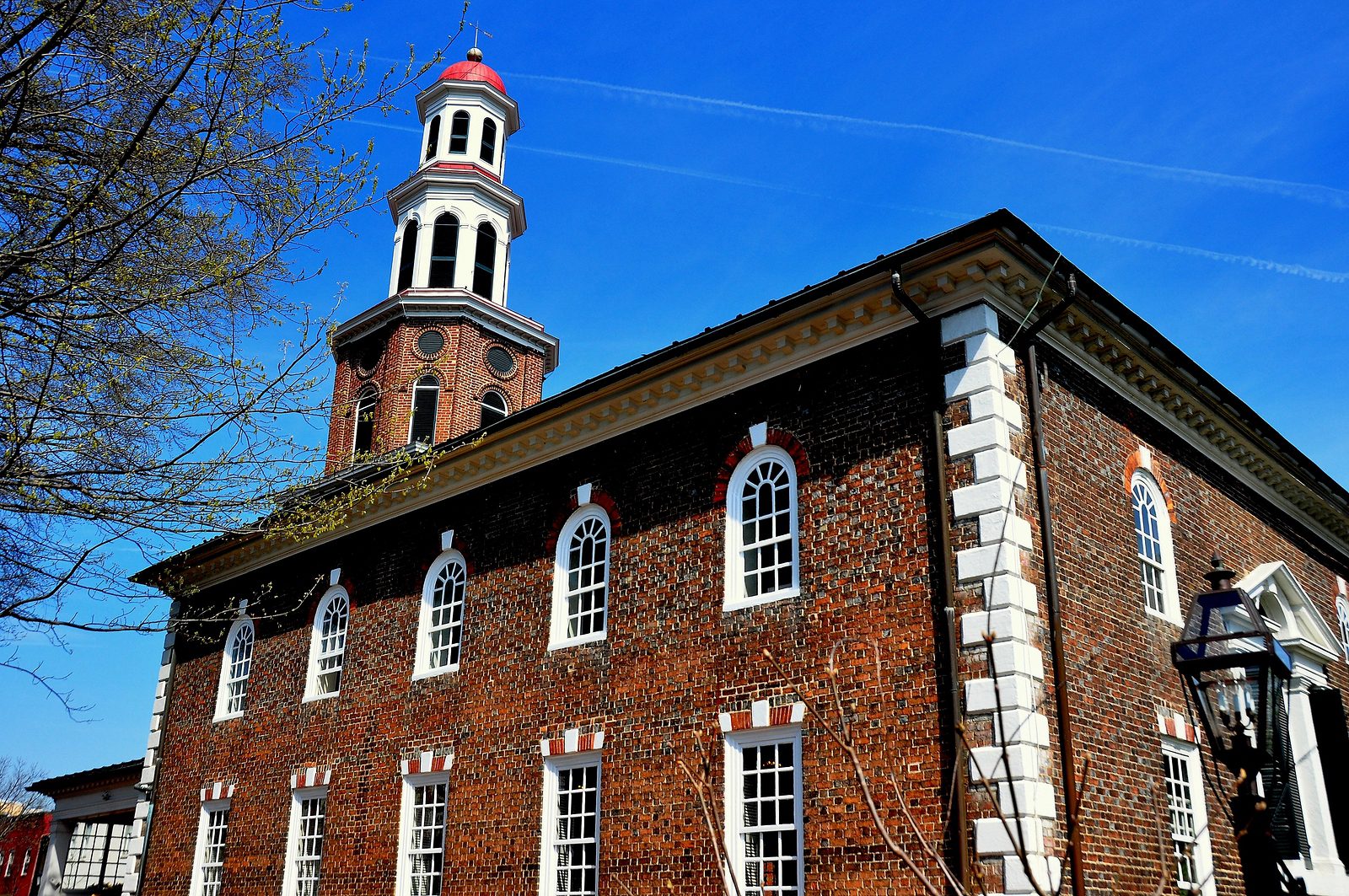 Two events in the last weeks seem oddly and unfortunately related and signal a world that is being undone from the foundations up because someone yells, “I feel unsafe.” This is not because someone is actually particularly unsafe, but because this has become a potent tool for the offended.

“All are welcome—no exceptions” reads a sign on Christ Church in Alexandria, Virginia, but the congregation doesn’t really mean it. Somebody very specifically is not welcome here any more—our first U.S. president.

This is the church that in 1773, George Washington helped create with his donation and the place where he had purchased a family pew. So connected was he to the place that after his death his family Bible was donated to the Church.

Long has this church been an icon in this tradition-steeped Washington DC town that visitors have come to see where Washington went to worship.

As of last week, caught in the frenzy of redefining and tearing up the past through tearing down memorials, Christ Church is taking down a plaque about George Washington that has hung to the side of the pulpit for over 150 years. It is going down with another plaque in memory of Robert E. Lee that has also hung in the Church.

Now there may be many good reasons why hanging the plaque about Robert E. Lee could be debatable, but George Washington?

The church leaders announced it was pulling down the plaque to its one-time vestry man because, as they said in a letter to the congregation, “The plaques in our sanctuary make some in our presence feel unsafe or unwelcome. Some visitors and guests who worship with us choose not to return because they receive an unintended message from the prominent presence of the plaques.”

Of course, you can guess why Washington’s plaque had to go. It was because he was a slaveholder and though he was the only major Founding father who freed his slaves upon his death, this stain upon him marks him as anathema to the congregation.

It is easy from our present stance and value system to criticize the past, a complex and complicated time with pressures we don’t entirely understand, but nobody can disagree that slavery is detestable. Still even in Washington’s own time the Reverend Richard Allen, who co-founded the African Methodist Episcopal Church, eulogized, “To us he has been the sympathizing friend and tender father. He has watched over us, and viewed our degraded and afflicted state with compassion and pity—his heart was not insensible to our sufferings.”

So while Washington was flawed, as were his times, throwing out his plaque is also a nod toward tossing away everything else he and the other Founders stood for. Disrespect them and it is not far to disrespecting our American Founding in general—what was and continues to be in the history of the world–revolutionary views about human freedom, inalienable rights granted by our Creator Himself, the rule of law and the dignity and worth of each human being and the responsibility that all have to determine their own lives.

Ironically, the very freedom to take down his plaque was granted and grew from the Revolutionary War that Washington led. When the people wanted to make him king, he utterly refused the honor and instead defined for us what being the President should mean.

Did George Washington feel “unsafe” when he was tasked to put a rag-tag army together to fight the formidable British fleet in Boston? Did he feel “unsafe” when, at the end of the hard winter of 1775, initially no man stepped forward to re-enlist? Did he feel unsafe when he crossed the Delaware in unforgiving cold and peril? Unsafe or not, he braved inestimable hardship in a war fought by an impoverished underdog army where victory was never just a given. Thank heaven, quite literally, that he didn’t say that he felt unsafe and scurry home.

As one writer noted of the Christ Church parishioners, “’Unsafe’ seems a bit extreme. Would the individuals who feel unsafe seeing Washington’s name also feel endangered when handling a quarter or a dollar bill?” Do they feel unsafe visiting the city named for the man? Apparently they do it all the time as it is right next door. Make no mistake “unsafe” in this case is not an emotional state, but a political weapon.

It was to protect the “safety” of the crowd that Balliol College at Oxford University, banned the “harmful” Christian Union from the freshers’ fair at the beginning of this school year—or what we would call the freshman fair. This is that opportunity for incoming students to see what clubs and organizations are on campus so they can possibly join, and the Christian Union is a club for Christians that has the very threatening motto, “Giving every student in Oxford University the chance to hear and respond to the gospel of Jesus Christ.”

Whoa, hold those dangerous Christians down, keep them at bay. They might read a Bible verse to you.

The organizers of the fair said that Christianity’s historic use as “an excuse for homophobia and certain forms of neo-colonialism” might make the students feel “unwelcome” in their new college if the Christian Union participated.

Vice-president of Balliol’s Junior Common room Freddy Potts said that if a representative of the Christian Union attended the fair it would cause “potential harm” to freshers…The presence of the CU alone may alienate incoming students.”

Let’s see—in a world where trucks driven by terrorists plough into crowds, killing and wounding people as if they were flies, where bombs are planted to kill the innocent—it is the Christian Union at Oxford University that is really dangerous.

Potter wrote The Daily Telegraph “Historically, Christianity’s influence on many marginalized communities has been damaging” and barring the Christian Union from the fair “may be a way of helping to avoid making any students feel initially unwelcome with Balliol.” He wanted the freshers fair to be a “safe and secular” space.

Essentially what they were saying is that the Christian Union would not be able to recruit new members. Their presence at the fair might lead to further harm “of the already most vulnerable and marginalized groups.”

Mr. Potts finally conceded to having a multi-faith stall at the fair, but students from the Christian Union were barred from attending or distributing leaflets.

After an uproar, the college finally conceded that the Christian Union will be offered a stall at future freshers fairs.

But look at the clout of that term “unsafe.” It is an attractive and politically savvy argument because it works. In our current world, the offended have power and they exercise it widely. The goal is to reform the whole world into a “safe and secular space” whatever that means. It certainly does mean that Christianity and the American founding are on the line. It means by definition that religious faith is dangerous.

For that matter so is freedom of speech and freedom of religion. The offended will be quickly there to demonstrate how dangerous any ideas are that are contrary to their point of view. But you have to ask those who will snuff out ideas, tear down a Founders’ plaque or call the only safe place a secular one, who the really the dangerous ones are? Those who are doing the banning or those who are banned?

Who was marginalized at the freshers’ fair? It was the Christians, not some imaginary student who would have fainted at the site of a booth for a Christian club.

The cry is “I will remove you, excise you, expunge you and pretend you don’t exist because I am too fragile to live in a world with ideas that are different than mine or words that might offend me.” Prepare to be expunged, oh you Christians. You seem to be an offense.

The march goes on. Katherine Timpf reported in The National Review that “King’s College in London is paying people £12 per hour to police speaking events on campus and take ‘immediate action’ if they hear anything that might offend the audience.

The marshals also put up posters and hand out leaflets reminding all attendees that “this is a Safe Space.” Examples of speech that might violate the policy “could include derogatory comments about someone’s age, disability, marital or maternity or paternity status, race, religious beliefs, sexual orientation, gender identity, trans status, socio-economic status, or ideology or culture,” according to an article in the Telegraph.

The tricky thing is you can’t always tell how someone will interpret your speech. Who knew, for instance, that the term “America is a land of opportunity” was a racist microaggression?

What worries me is the slippery slope this suggests. Eager not to offend, free speech is diminished on campus. Conservative speakers are greeted by violent crowds. Where are we going?

Michael Brendon Dougherty wrote in The National Review, “The slippery slope isn’t a logical fallacy, but a way of life. In our gloomy predictions, we regularly understate how far society will begin kicking us down the slope once we start sliding. It would’ve been unthinkable for even the most pessimistic anti-divorce activist of half a century ago to predict that the majority of American children would be born illegitimately within a few decades.

“Anti-euthanasia activists never dared suggest that the Dutch would be so depraved as to begin drugging children into their graves merely because they reported depression. When Vermont was considering legislation providing for civil unions for same-sex couples, not even the sweatiest, most paranoid snake-handler imagined that florists would be financially ruined by the government for refusing to serve customers whose nuptials violated their religious scruples. Yet here we are. And now, a few weeks after conservatives were laughed at for predicting that the desire to take down Confederate memorials would eventually turn into the desire to take down memorials to the Founding Fathers, it has happened again.”

We live in a world where everything accelerates, whether it be the best or the worst. We ain't see nothing yet when it comes to progress in medicine and technology, but the same applies to the so-called "new morality," which actually is the old immorality in disguise, and directly inspired from the "Father of Lies/Master of Deceit." The fight for truth and righteousness will therefore turn tougher, especially with a new generation that has been conditioned to accept the unacceptable, including within our own LDS community. But, let us always remember the Lord's admonition:"In the world you will have tribulation. But take courage; I have overcome the world!” John 16:33

Over sensationalised: oxford did not ban Christianity, they asked one small group to not attend an event. The Anglican Church is a powerful force at the university.