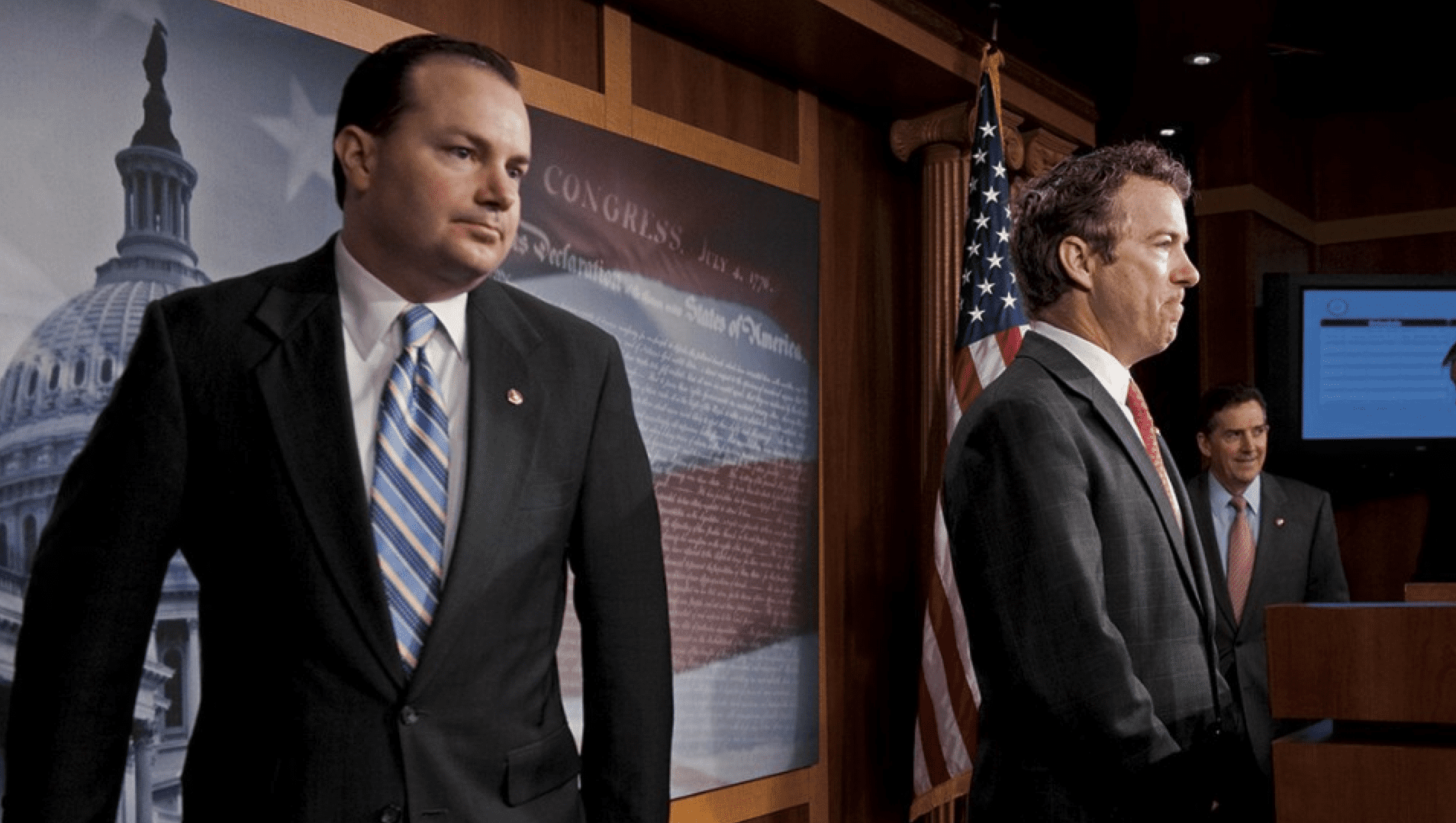 The National Journal has published a profile on LDS Senator Mike Lee, that paints him as an influential party leader, the creator of an innovative policy agenda, and best friends with three colorful front men who are running for President.

Here are some highlights. To read the full article, click here.

In both his family and professional background, Lee is about as much of a natural outsider as Jeb Bush. Lee, whose father served as solicitor general in the Reagan administration, grew up in the Washington suburbs of McLean, Virginia (a few doors down from Sen. Robert Byrd), went to middle school with one of Sen. Strom Thurmond’s kids, and has been close friends with Sen. Harry Reid’s son, Josh, since they were 11 years old. Senator Reid was himself Lee’s mentor, or “home teacher,” in the Mormon faith.

The future senator grew up talking constitutional law around the family dinner table and watching his dad argue before the Supreme Court. He also spent a lot of time hanging around Josh Reid’s house, listening to the Reid clan debate the issues of the day from a decidedly different perspective. “I learned early on that I could get along well with the Reid family as long as I didn’t profess my profound love and respect for Ronald Reagan and the great things he was doing for America,” Lee recalled at a recent breakfast meeting with journalists in downtown Washington. And if he did: “I had to be ready to defend myself.” Even now, Lee speaks fondly of the crusty Democratic Senate leader: “To this day, as long as we don’t talk about politics, we get along great—and sometimes, even when we do talk about politics. Sometimes, when we agree, he’ll say to me, ‘Wait a minute! What’s wrong here? We agree. Which one of us is wrong?’ ”

Today, the Utah senator is one of the Beltway’s most aggressive purveyors of reform-minded conservative ideas. While his three closest allies in the Senate—Ted Cruz, Marco Rubio, and Rand Paul,

all fellow first-termers who, like Lee, rode the tea-party wave into office—have spent the past few years raising their profiles in preparation for presidential runs, Lee has chosen a different path: hunkering down with policy experts in an effort to shape an agenda that will help Republicans appeal to the poor and middle class.

Blending populist communitarianism with a libertarian suspicion of government puts Lee in the sweet spot for reform conservatives—that is, Republicans who want to put forward affirmative policy ideas instead of just fighting big government. “He’s been one of the real policy entrepreneurs since he came in,” says Yuval Levin, founding editor of National Affairs and a leader of the reform-conservative movement. “He’s one of a handful of members really interested in policy details and in turning conservative ideas into policy proposals.” More than anyone else, says conservative columnist Ramesh Ponnuru, Lee has filled “the policy vacuum” in the Senate.

Conservatism for a lot of the Obama years moved away from being a policy-oriented movement,” Ponnuru says. “Senator Lee is playing an important role beefing up the policy content.”

“Ultimately, say observers, Lee’s influence isn’t about any specific bill he puts forth—or even about getting his friends to talk up reform on the presidential trail. Rather, his aggressive policy talk has helped re-energize debate among his Senate colleagues in general. By putting ideas out there without getting beaten up, says Salam, Lee is encouraging his fellow lawmakers to take more risks and think more creatively about policy. Ironically, Lee’s credibility with the right, cemented by less-constructive antics like the shutdown, is arguably what has made it possible for him to champion some of these ideas. “You cannot accuse him of being a RINO squish,” says Ponnuru (i.e., “Republican in name only”).”

good analysis of his efforts to expand his influence in the Senate by creating an innovative policy agenda.

“This is a guy who none of us thought when he arrived was going to have the degree of influence he already has. Nobody thought he would be the one charting a path,” Domenech says. “Lee is very deliberate and serious about policy. He’s thinking about things in a way not a lot of senators do.” In other words, just because Lee isn’t running for president like his pals Cruz, Rubio, and Paul, don’t assume his impact will be limited. In Mike Lee, says Domenech, “you have a guy who is maybe more influential on the party than any of the three very colorful front men.”