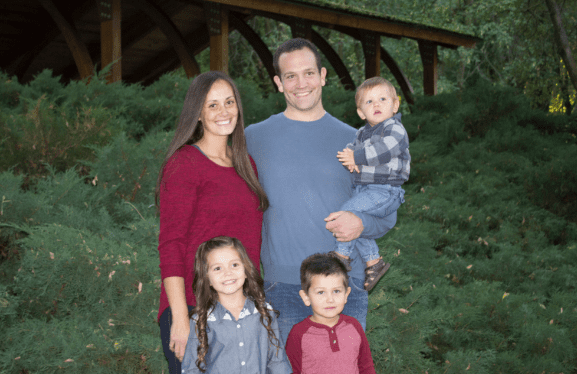 “My Deceased Father Loves My Stepfather”

The following was written by Brock Richardson, about his father, Lance Richardson, who passed away when he was 19 years old. The cover image is Brock and his family now.
Editor’s Note: The following is part of a series excerpted from ‘The Message From Our Side”. To see the previous article in the series, click here. To get your copy of the book, click here.

When my dad passed, I was serving a mission, and the opportunity for full-time missionary service brought a continual closeness to the Holy Spirit and to my dad. For the whole two years of my mission, I honestly never went through a grieving process. The sustaining power of the Holy Ghost that came from serving the Uruguayan people gave me that absolute assurance that my father was with me. From time to time, I could sense his presence, and even see him in my mind’s eye. It was interesting to me that when I saw him, he no longer looked like the sick man who had passed away. No, from what I saw in my mind’s eye, the eye of faith, I could see a man who looked much more like the man he was in his high school and college photographs. I thought that he looked a lot like me. In Uruguay, there was no grieving.
Later, when I returned home, I was shocked to see the family still in a state of mourning over something I had been blessed to get through so easily. Perhaps the transition back into living for myself caused me to go through a bit of a mourning process. Not for my father that died, no, the Lord had already healed me from that. This mourning happened every time my mother left on a date. I could not get into my heart why she would be interested in men other than my dad who had become my best friend. It felt like my mother was cheating on my dad rather than moving on from his death, because to me, he had not died. There were times when I went into a fit of rage, especially when mom would come home late from a date. Ironically, I was now acting like the worried parent, policing my mom over the time she would need to return from her dates.
It was around that time that I got into boxing and MMA fighting. I found that the rage over my mother’s ‘infidelity’ was numbed when I was punching someone, or being punched. The physical intensity numbed the emotional intensity that was too much for me to handle. My thoughts were lost in a desperate fight for air when I was fatigued, and my emotional pain came out my pores like tears. It was a euphoric feeling.
As I drew close to the woman who would later become my wife, she began to counsel me away from fighting, telling me that simply numbing the pain would only lead to more rage. I also began to find a healing balm that was much more like what I had experienced on the mission I had served in Uruguay. I began to be involved teaching the words of Christ to youth as a Seminary teacher. It was this healthier way to channel my feelings and the constant pleading of my wife that put an end to running from my problems and led to my career as a full-time Seminary teacher.
Around the same time I married my sweetheart, my mother was also married.
I have to admit that even after leaving fighting behind and being involved with Seminary, those feelings of anger that my mother had married another man were still present. Thankfully, my career as a Seminary teacher led me to a much more fervent look at the words of Christ during my nightly personal scripture study.
One night as I was reading my scriptures, Heavenly Father sent me an angel. Once again, I could see in my mind’s eye, as clearly as I had ever seen him in Uruguay, my father standing next to me as I sat with my scriptures opened. I saw him standing there, beaming, so happy. He leaned down to my level, and said in an emphatic tone: “I love your stepfather, Haydn!”
Years of anger built up in one moment, and I kind of flipped out on my dad. I think in most cases, because of my anger right then, I would have lost the right and power to keep the Holy Ghost with me, and my father would have had to withdraw, but perhaps in this case, because of Christ’s mercy and understanding of my situation, the Holy Ghost remained, and my father was allowed to stay. I mentally yelled at my father: “How could you?! How could you love the man who stole your wife?!”
My father’s reply: “Brock, son, it’s not like that. It’s not like that up here. There is no jealousy. There is no hatred. I love the man who can take care of your mother until I can see her again.”
Tears flowed and my feelings for my stepfather, Haydn, were forever changed. I began to see him in a new light, and realized that all of us—my mother, myself, and my younger siblings—all owe a huge debt of gratitude to my stepfather. It was he who took on the burden of a family in mourning and helped us all get back up, coalesce, and move forward. It was he who, along with the help of our Savior, brought us together as a family again. Words cannot express the sincere gratitude that I feel toward my stepfather. Our relationship has become close, even like that of father and son. We’ve laughed together and gone to movies and church meetings together. My stepdad and I have bonded so strongly, founded on the knowledge that my father, who is in some ways my best friend, is forever in a debt of gratitude to my stepfather.
An excerpt from the book, “The Message From Our Side,” by Lance and Jozet Richardson and their children. Order your copy at www.themessagefromourside.com, or buy it at Seagull Book or Deseret Book.
2 Comments | Post or read comments

I remarried after losing a husband to an accident. My children were young. It was very hard on them when I made the decision to marry again even though five years had passed. As time went on my children learned to love their stepfather like he was their own father and he in turn loved them like he was their father.

I found your narrative fascinating. I love it when a guy can express real feelings. Your wife is a lucky girl.