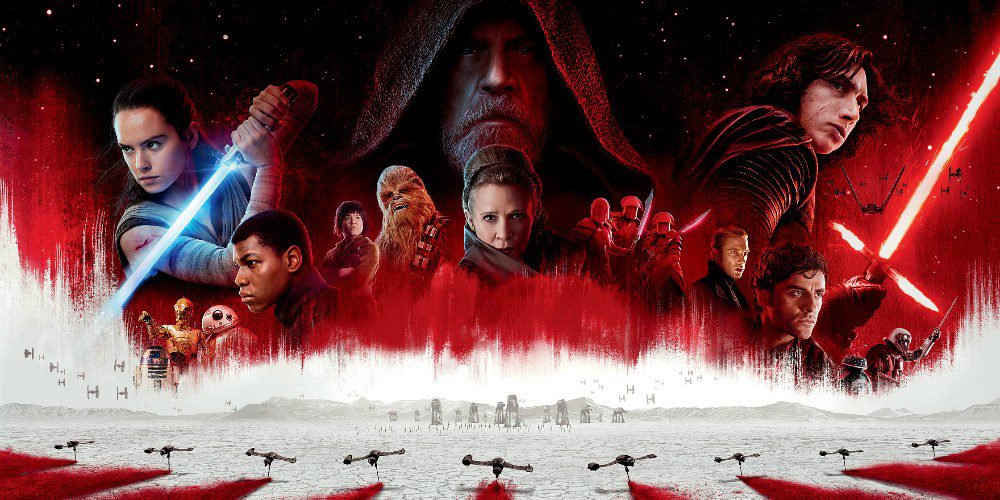 The eighth episode of the Skywalker saga finds Rey attempting to recruit Luke Skywalker as Kylo Ren and the First Order close in on the Resistance.

Writer-director Rian Johnson has crafted a phenomenal film here, honoring the Star Wars legacy while upending its tropes to breathe freshness and vitality into the franchise. The performances are phenomenal, with the new players growing their characters in interesting ways and the “old guard” (namely Mark Hamill and Carrie Fisher) delivering crowd-pleasing turns as Luke and Leia, their performances having more weight than they could deliver when they were younger.

The visuals are stunning; not just the effects, but the composition and vision behind the shots. John Williams offers his best musical score in years. The story and diverse cast explore timely social themes without being heavy-handed about it. At two and a half hours it’s the longest Star Wars film; it’s not as tightly-paced as The Force Awakens and the middle section will try the patience of little ones. However, the gripping story, ingenious (and meaningful) plot twists, and stellar action more than make up for that. This is the most engrossing, unpredictable film in the series since The Empire Strikes Back.

The Last Jedi is rated PG-13. It has a few very mild profanities and plenty of action violence. A character is tortured through use of the Force. Characters are sliced apart by lightsabers (no blood, but we do see the bodies), shot by lasers, and die in explosions. It is about as intense as Revenge of the Sith, although it has more joy, humor, and hope than that film.

Protect what you love instead of fighting what you hate. Victory comes through courage and defense, not through violence and attack. Failure is the greatest teacher. Leadership is doing what’s right, not seeking praise or popularity. People of any gender or race can be heroes and leaders. It only takes a few people to inspire many to stand up.

Oscar Isaac is fantastic as Poe Dameron in The Last Jedi. He first came to my attention as Joseph to Keisha Castle-Hughes’ Mary in The Nativity Story, an intelligent Bible film and one of my picks for best in that genre.

Jonathan Decker is a licensed marriage and family therapist and clinical director of Your Family Expert. He is the author of 250 Great Movies for Latter-day Families and writes a weekly column at Ask a Mormon Therapist.