Missionary Moment: The Man Followed Us Down the Street | Meridian Magazine 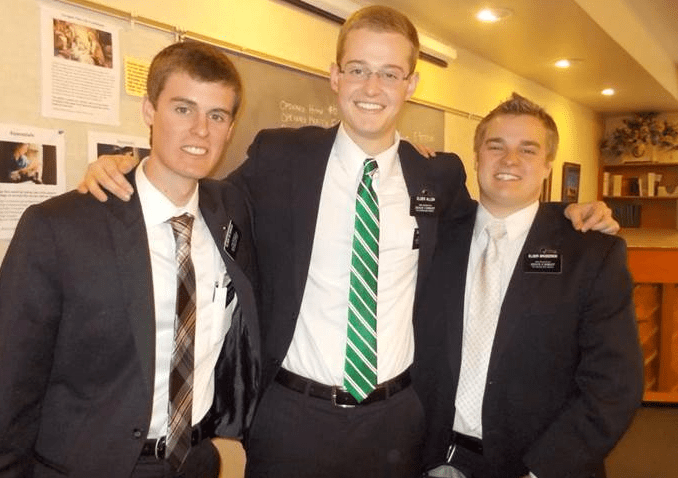 Missionary Moment: The Man Followed Us Down the Street

This week in the Wisconsin Milwaukee Mission was intense with some special finding experiences. On Tuesday we only had two appointments scheduled, which left us with about 6 straight hours of tracting door to door. It was very difficult. We shared a few messages on doorsteps but NO ONE wanted us to come back. In fact, most people were strangely rude.

For example, one man was waiting for us outside in his front yard when we reached his house. He scolded us for nearly a half -hour and accused us of preaching false doctrine. I politely told him that he was wasting our time and we had to leave.  He replied, “No problem, I will walk with you!”  I didn’t think he was serious, it has never happened before, but sure enough he walked with us as we tracted the entire street to make sure no one would invite us inside. Only one person was home and when they answered, before I could even introduce myself, the man that followed behind us quickly screamed, “Sorry, ma’am, these are Mormons here attempting to share false doctrine with you, so I suggest that you just close your door as soon as possible!”  I couldn’t believe it. We eventually managed to run away from him after a while.

Later, after even more poor results, we got back to our car. I looked over to my companion with a smile and said, “Sweet, we’ve seen the trial of our faith today. Now let’s go see some miracles!” We went and knocked some doors at an apartment complex down the road. The first door wasn’t interested but the man who answered said that the lady who lived upstairs might be interested. That was cool.

We decided that we would knock on some more doors on our way upstairs. The second door, once again, was not interested but the lady inside said, just like the man before, a woman upstairs really needed us. We didn’t need to hear that again! As soon as the door closed we ran upstairs and knocked on the door. The woman who opened the door was very hesitant at first, refusing to totally open the door, because she didn’t think we were Christians.  However, after a brief discussion, she opened the door wide and we told her about the Restoration.

As we taught her about the First Vision she said, “WAIT!  I feel something. I can’t discern what it is yet, but keep on going!” Ha ha, we knew what she was feeling!  She was very sensitive to the feelings of the Holy Ghost. By the end of our presentation, she said she loved our message.

When we told her about the Book of Mormon, she said that she already owned a copy from a long time ago that she had been too afraid to open. But for some reason she could not get herself to throw the book away. She then showed us her very old copy and I invited her to read Third Nephi chapter 11. She flipped right open to it. That chapter was the only page in the entire book already folded down. We could see the old faded pen mark already circling the entire chapter.  We couldn’t believe it.  Some missionaries, many years before, had given this book to her mother, but it had never been opened again.

I told the woman that the same invitation the missionaries had given her mother many years ago to read the Book of Mormon was now being given to her. We all felt the spirit and she accepted our invitation. After a long day of difficult trials, we had eventually been led to the exact door where we needed to be. It was a huge testimony builder for me!

The challenges were overcome and it was all worth it! Faith precedes the miracle.

Neat story! Who is the Elder on the left, in the picture? I think I know him and I may not be able to sleep until I figure it out!

Elder Allen's Dad, Bishop West Allen, shared this from his son's letter during our sacrament meeting last Sunday. Both my wife and I were in tears, being touched so deeply by the spirit. Truly no power can thwart this great work. Mark, thanks for sharing this.