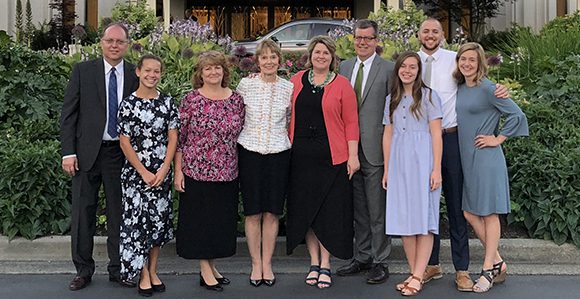 Macy Sorensen was sitting with the youth in her stake center in Enumclaw, Washington, when she heard President Russell M. Nelson issue the invitation for youth to take a “seven-day break from the fake” by abstaining from social media for a week and doing more to help gather Israel.

“I acknowledge that there are positives about social media,” President Nelson said during the Worldwide Youth Devotional. “But if you are paying more attention to feeds from social media than you are to the whisperings of the Spirit, then you are putting yourself at spiritual risk, as well as the risk of experiencing intense loneliness and depression.”

Sorensen—the stake Young Women president—felt an outpouring of peace as she listened to the prophet’s words and watched as several youth along the pew in front of her immediately took out their phones and started deleting their social media apps.

Almost immediately, she felt “like I had more space in my brain to think and felt the promptings of the Holy Ghost nearly continually.”

One “odd” prompting she received was to do her ironing—one of her least favorite chores. Still, unable to shake the nagging feeling, she set up her ironing board and got to work on a pile of linen shirts.

“There was something about that physical, repetitive task that emptied my mind, and the sound of the spray starch reminded me of my mom, who ironed every Monday of my growing up years,” Sorensen recalled.

Soon her thoughts also turned to her father, who had died several years prior. Sorensen joined the Church when she was 19; her mother joined nearly 15 years later as she cared for her husband, who was bedridden from a stroke. He passed away without accepting the gospel.

As Sorensen was ironing and thinking about her father, “I got the real distinct impression that he was there and felt him say, ‘Don’t forget about me.’” That thought was soon followed by “I haven’t been sealed to your mother.”

“I was floored,” Sorensen said. She immediately put down the iron and called the temple to get an appointment to have her parents sealed.