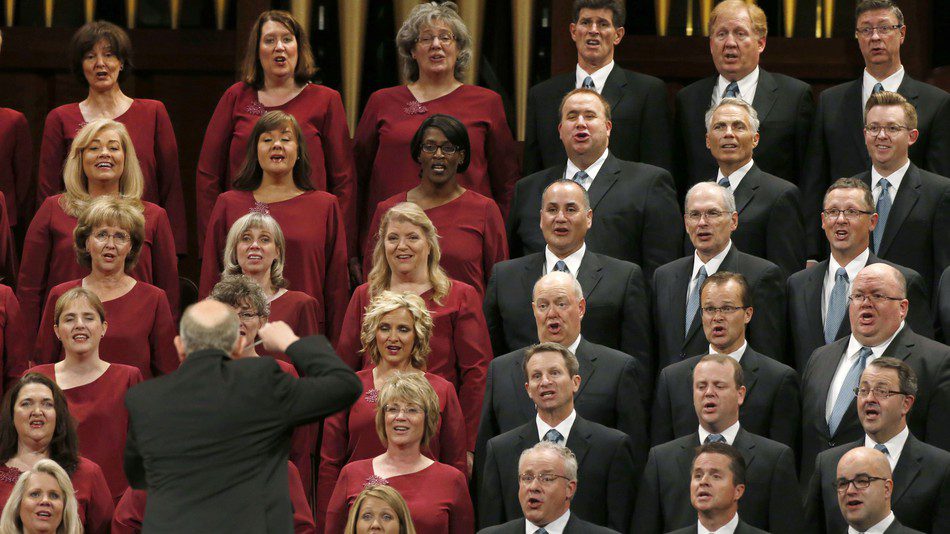 For those who have so readily pounced on The Church of Jesus Christ of Latter-day Saints for sending its famed Mormon Tabernacle Choir to sing at the inauguration of President-elect Donald Trump, there is a case to made for the choir’s appearance based on LDS history, doctrine and ethos.

First, take a look at LDS history. It was the Fourth of July 1857 and a large group of New City-area Mormons gathered at Norwalk, Connecticut. They boarded a sloop that sailed into Long Island Sound toward an islet they called “Nauvoo Island.” The moniker honored the faith’s one-time headquarters in Illinois during the 1840s near where the Prophet Joseph Smith was martyred. The island became the scene of a patriotic celebration filled with orations, a “clam bake” and, of course, singing. A small brass band accompanied hymns and patriotic songs. It became front-page news when reporters from the leading newspapers of the day, The New York Herald and New York Times, both sent reporters to cover the event.

Ironically, while Mormons put on a show of unparalleled nationalism, an expedition of several thousand U.S. soldiers was already being organized to go the Utah territory to put down the perceived “rebellion” and Brigham Young’s anti-nationalism. While there wasn’t praise for President James Buchanan’s “Utah Expedition” that July Fourth on Nauvoo Island, there was effusive praise for the ideals of America and its Constitution.

One LDS leader said of U.S. Constitutional laws: “The terror of despots, the wonder of the world, the boast of Columbia’s sons, when administered according to their spirit and letter.” There were toasts to George Washington, Thomas Jefferson and Brigham Young. There was no toasting James Buchanan.

Like the Latter-day Saints on Nauvoo Island, the Tabernacle Choir won’t be endorsing Trump at his inauguration, but singing praises to American nationhood. Since its beginning, the choir has provided a soundtrack to bolster the nation in times of reflection, war, national tragedy and presidential transition.

There’s certainly precedent. The choir has performed at five inaugurals and was declared “America’s Choir” by Ronald Reagan at his inaugural. It’s hard to say if Hillary Clinton would have invited the choir to her inaugural, but had they been invited the choir likely would have gone despite the animus many conservative Mormons have with Clinton. To play on a phrase from a Bill Clinton campaign – it’s the nation stupid. Trump will be president, but he is not the United States.

Mormons have every reason to sing at a presidential inauguration because once we weren’t invited to anything. it was this nation that once would not seat a Mormon apostle in the U.S. Senate and, more recently, some Americans had strong doubts about a Mormon in the White House during the Romney presidential campaigns. The fact that a minority faith can be among the voices on the national stage is an important recognition of the religious diversity of the United States. If Mormons want a seat at the Trump table during the next four years, pragmatism requires us to sing before dinner.

The Tabernacle Choir will be larger-than-life LDS representative at the inauguration and will join Catholic Cardinal Timothy Dolan of New York; Rev. Franklin Graham, son of evangelist Billy Graham; the Rev. Samuel Rodriguez, head of the National Hispanic Christian Leadership Conference; and Rabbi Marvin Hier, founder of the Simon Wiesenthal Center. Interestingly, like Mormons, the Wiesenthal Center has criticized Trump for his comments that would categorize all Muslims as terrorists. Like Jews, it is also important that Mormons have the ear of a Trump presidency, if nothing else to help moderate some of his extreme views on immigration.

There’s also the Mormon doctrine and ethos of governmental respect reflected in the Mormon foundational 12th Article of Faith, “We believe in being subject to kings, presidents, rulers, and magistrates, in obeying, honoring, and sustaining the law.” That has meant that Mormons have been willing to abide by laws and policies of the governments where ever they live. Before the fall of the Berlin Wall, the LDS Church functioned under the strict rules of an East German Communist regime, but eventually won the right to build a sacred temple and have modicum of religious freedom in that nation. That came largely because government leaders learned that Mormons keep their word.

In the United States, some were surprised that Mormon leaders were quick to criticize public officials who would not issue marriage licenses to gay couples. Even though the church and its members had opposed the legalization of gay marriage, once it became law, church leaders sought ways to support the law and yet protect the church’s religious freedom guaranteed by the Constitution.

Such logic guides LDS thought — once people have voted for a president or the U.S. Supreme Court has ruled on law, Mormons obey, honor and sustain such decisions. That doesn’t mean Mormons follow blindly. If they don’t like the law or elected leader, they are encouraged to use democratic systems to replace officials and change laws.

Whether a popular policy or law or controversial president, Mormons take seriously their commitment to honor leaders and governments in nations where they live. If that means drawing a distinction between a person and the office they hold and the nation they lead, then good for the Mormons. Through a sometimes violent and discriminatory history, they have learned to sing praises and mend national identity above the din of short-sighted punditry and controversy.

Joel Campbell is an associate teaching professor in journalism in Brigham Young University School of Communications. His views do not necessarily reflect the views of BYU. He holds a master’s degree from Ohio State University. He worked 20 years as a reporter and editor for newspapers in Salt Lake City. He teaches media writing, journalism principles, media and religion, and research courses.  He has published commentary in the popular press and academic journals about media coverage of Mormons in both the 19th Century and today.

Plenty has already been said about this, perhaps too much, but, I'll still add one more comment. We are constantly told to practice love and forgiveness. Not one of us, Choir members or otherwise, has either the position or right to stand in judgment of Donald Trump. In fact, he has already done more for the welfare and future of this Country than Obama has done in two terms in office, and he has been far more open and has reached out more effectively than the preceding President. Good for him, and super good for the Choir's planned involvement!

We may or may not like the idea of Trump being our next President. But it sure beats Clinton. And as for the choir singing for Trump-- it is one way for those who do not know anything about Mormons to see us in a new light. I think it is a good missionary tool. Trump has been elected & we need to hope for the best & move forward.