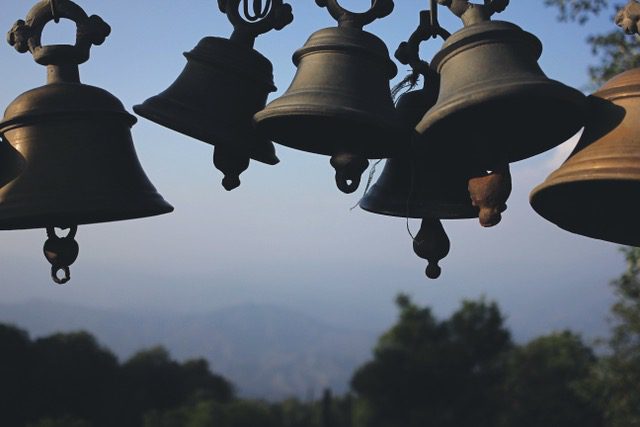 After months of negotiating the treacherous waters of change, yet with the hope of unity, representatives from twelve of the thirteen states in a new, fledging nation signed the United States Constitution on September 17, 1787. To commemorate the signing of the Constitution, every year on September 17th – “Constitution Day”, members of the Daughters of the American Revolution (DAR) Ring the Bells! at 4 PM EDT.

Shortly thereafter, in 1956, it was put into public law. Hear the words of President Dwight Eisenhower when he signed it into law:

“Now, Therefore, I, Dwight D. Eisenhower, President of the United States of America, do hereby designate the period beginning September 17 and ending September 23, 1956, as Constitution Week; and I urge the people of the United States to observe that week with appropriate ceremonies and activities in their schools and churches, and in other suitable places. I also urge them at that time to give solemn and grateful thought to that eventful week in September 1787 when our Constitution was signed, delivered to the Continental Congress, and made known to the people of the country, thus laying the foundation for the birth of a new Nation.”

An Inspired Document For All People

The United States is not the only nation to benefit from the Constitution. President Dallin H. Oaks, who was a professor of law and served as a justice of the Utah Supreme Court before his apostolic calling, was asked a challenging question by a former professor. This colleague, who had taught at the University of Utah College of Law, sought understanding about Latter-day Saints’ belief that the United States Constitution was divinely inspired.

As Elder Oaks pondered and studied the answer to his colleague’s question, he stated the following in 1992: “The United States Constitution was the first written constitution in the world. It has served Americans well, enhancing freedom and prosperity during the changed conditions of more than two hundred years. Frequently copied, it has become the United States’ most important export. After two centuries, every nation in the world except six have adopted written constitutions, and the U.S. Constitution was a model for all of them. No wonder modern revelation says that God established the U.S. Constitution and that it ‘should be maintained for the rights and protection of all flesh, according to just and holy principles.’” D&C 101:77.

Doctrine and Covenants 101:77, 80 states: “According to the laws and constitution of the people, which I have suffered to be established, and should be maintained for the rights and protection of all flesh, according to just and holy principles . . . And for this purpose have I established the Constitution of this land, by the hands of wise men whom I raised up unto this very purpose . . .”

In Appreciation of Our Nation’s Capital

Growing up in the shadow of our Nation’s Capital has given me the privilege of seeing THE Star-Spangled Banner draped down the wall of the Smithsonian’s National Museum of American History, the Charters of Freedom* displayed at the Rotunda of the National Archives, and the opportunity of visiting for free many museums, galleries, historic sites, and memorials, all strengthening my appreciation for those who preserved and laid the foundation for our nation.

(*The Declaration of Independence, Constitution of the United States, and Bill of Rights)

This has taught me that being able to see our nation’s precious pieces in person was not something to be taken for granted. Neither was strolling around the breath-taking Tidal Basin in the spring with the Cherry Blossoms in full bloom, wandering through the U.S. Botanical Gardens in winter, or exploring the Ellipse grounds where the National Christmas Tree stands.

Daughters of the American Revolution (DAR)

Many other parks, national treasures, and buildings, which house our heritage, are spread across the National Mall and beyond. One of these jewels is the National Headquarters of the Daughters of the American Revolution, located across the street from the east end of the Ellipse and just a few blocks from the White House. Its Constitution Hall has been a venue for many performances and events including accommodating many of the surrounding area high schools’ graduations. All my children’s graduation ceremonies took place upon Constitution Hall’s auditorium stage.

At that time, I really didn’t know much about DAR (or its counterpart SAR – Sons of the American Revolution) except the fact that women across our nation could apply for membership if they had a Revolutionary War patriot ancestor (which includes much more than just soldiers).

My Journey to DAR, Its Genealogy Resources, and Beyond

Growing tired of FamilySearch patrons, trying to snitch MY William Henry, led me to join DAR. From the research my mother and great-aunts gathered, I understood William Henry fought in the Revolutionary War. So, armed with their research as a foundation, I ventured out to prove or disprove this line. If proven, perhaps people would stop merging this ancestor with the other William Henrys, and I would become a “one in a million” DAR member.

To help me in my efforts I used DAR’s free online Genealogical Research System and online library’s catalog. DAR’s vast library, housed in Constitution Hall, contains over “225,000 books, 10,000 research files, thousands of manuscript items, and special collections of African American, Native American, and women’s history, genealogy and culture. The nearly 40,000 family histories and genealogies comprise a major portion of the book collection.”1 These amazing resources are free to the public.

Joining DAR’s North Carolina Otway Burns Chapter has opened my eyes to what this organization is about. With nearly 60 members and over 35 committees overseeing everything from American Heritage to Women’s Issues, these women give thousands of volunteer hours of service every year (nationally volunteer hours are in the millions). They serve veterans, participate in the local schools’ “Backpack” program, promote literacy, preserve genealogies, promote patriotism, and actively support Constitution Week among many other projects and programs.

For Constitution week, to raise awareness and educate our community, our DAR chapter reaches out to local schools and libraries setting up displays which include books, posters, and other patriotic literature. They have also obtained proclamations from public officials, and creatively placed painted patriotic rocks throughout the area. Then, as tradition stands, every year at 4pm EDT on September 17th, the Otway Burns Chapter along with members of the Daughters of the American Revolution throughout the United States and chapters across the globe, observe Constitution Day by ringing bells.

What I have learned about this patriotic, preservation organization and the women who serve therein have gained my deep respect and admiration. Their vigilance and diligence in safeguarding and preserving our heritage and memory of the signing of the Constitution is noteworthy.

So, whether you are on the streets of our Nation’s Capital, the beaches of North Carolina or across the world, join the tradition and Ring the Bells! in remembrance of the signing of the United States Constitution, “to give solemn and grateful thought to that eventful week in September 1787” and to express gratitude to God.