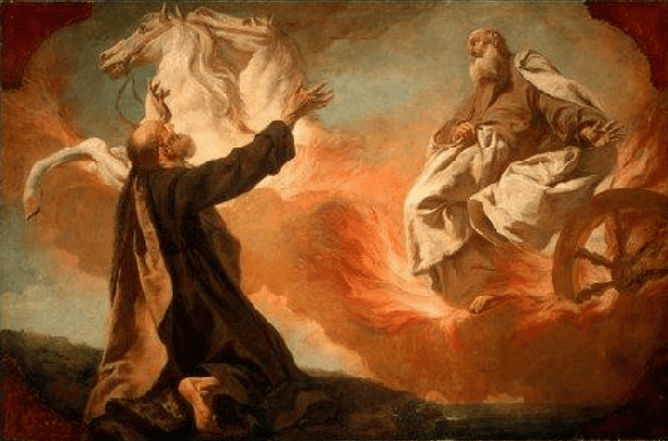 Cover image: “Elijah Taken Up in a Chariot of Fire” by Giovanni Battista Piazzetta.

The prospect of having to “replace” such a prophet as Elijah understandably distressed Elisha.  His impassioned plea to receive a “double portion of [Elijah’s] spirit” prior to the Lord’s dramatic removal of Elijah into heaven (2 Kings 2:9) evidences his humility, but also expresses his faith in the Lord’s ability to qualify whom He calls.  We, too, must exercise the same faith in God when we are called to a position where someone has given exemplary service.  Elijah’s rather dramatic ministry would be daunting to anyone called to follow.  Yet, Elisha properly understood that the Lord has promised, through his gracious bestowal of spiritual gifts, to make the “weak things strong” (Ether 12:27) and “prepare a way” (1 Nephi 3:7) for all who He calls to succeed.  I have personally felt the pangs of anxiety about following in another’s footsteps.  But I can also attest to strengthening and sustaining arm of the Lord, especially when I have humbly sought His help as Elisha did.

Elisha, Elijah and the Savior

Andrew Skinner, Dean of Religion at Brigham Young University (Provo), has written of some striking similarities between Elijah, Elisha, and the Savior.  That the two ancient prophets were similar to each other is not too surprising considering their close relationship and Elisha’s fervent and unfailing loyalty to Elijah (note 2 Kings 2:4, 6).  Professor Skinner’s observations are instructive and are presented below with bullets for greater access and emphasis.

• “Elisha’s first miracle—smiting the waters of Jordan with Elijah’s mantle—was also the last miracle performed by his master (2 Kings 2:8, 14).”

• “In an episode foreshadowing one of Christ’s great miracles, Elisha even fed one hundred men with only twenty loaves and some grain and had food left over (Mark 6:33-44; 2 Kings 4:42-44).”

• “Like Christ, he healed the sick, as in the example of the Syrian general Naaman (2 Kings 5).”

• “…Elisha, like both his masters, Elijah and Christ (who was the heavenly Jehovah come to earth), prophesied the future and constantly inveighed against the idolatry of Israel.”

• “The resemblance between the ministries of Elijah, Elisha, and Christ is attested by the New Testament, especially those references that show that Jesus was mistaken by some for the returning Elijah (see Matt. 16:14).”

• “The New Testament also indicates that Christ was keenly aware of and even identified with Elijah’s and Elisha’s missions (Luke 4:24-27).  Truly the lives and activities of these men were similitudes of the God whom they served.” (Andrew C. Skinner, “Kings and Prophets in Divided Israel,” Studies in Scripture: Volume Four, 1 Kings to Malachi, 30-31.)

It is of further interest to note that “on two [separate] occasions when the king of Israel confessed his impotence to heal or to provide food [the king vehemently demonstrated this by] tearing his garments, Elisha proved that the Lord, whom the people had forsaken, was indeed the true king of Israel by healing Naaman and by giving food (see 2 Kings 5:7ff; and 6:30ff; Harris, Archer, and Waltke, Theological Wordbook of the Old Testament, 2:817).

Further Motives in the Miracles

From the time that Israel was led out of Egypt, the Lord had to continually strive with his children to get Egyptian influences out of them.  The continually straying and rebelling Israelites were easily susceptible to their neighbor’s religions and deities.  During the miracle/plagues of the Exodus and continuing through this period of the divided kingdoms (Judah in the south and Ephraim in the north), many of the miraculous acts performed by the Israelite prophets seem to be an answer for whether Jehovah be the true God instead of the multiple idol imposters of the gentiles.

For example, Ba’al, the Phoenician deity and preeminent “god” of the Canaanites, is specifically mentioned fifty-eight times in the Old Testament and it’s plural form is found another eighteen times (J. Mulder, “baal,” Theological Dictionary of the Old Testament, 2:192; cited in Woods, below).  One LDS scholar has written, “Canaanite vegetation, particularly in the north, was rich and the soil fertile.

Thus, the question of who controlled the water became a critical issue, particularly in the northern kingdom. The allegiance of Israel vacillated among many idolatrous gods, but primarily between the two gods who claimed power over water: Baal, the Canaanite storm god, and the Lord Jehovah, who had delivered the Israelites.” (Fred E. Woods, “The Water Imagery in John’s Gospel,” in The Lord of the Gospels: The 1990 Sperry Symposium on the New Testament, 190).

The miracles recorded in 2 Kings 1-6 appear to be a continuance of the Lord’s showing Israel that He alone is the God with true power over water and all other elements.

Had Israel been humble and accepted these divine object lessons they would have avoided their just dispersion and destruction at the hands of invading Assyria in 722 B.C.

“Open His Eyes, That He May See”

One of Elisha’s servants had an amazing experience that highlights the existence of Godly supernatural forces available to the righteous for their protection.  When exiting their tent and seeing (naturally) the enemy forces gathered, the servant was naturally frightened (2 Kings 6:15).  When Elisha was informed he calmly responded “Fear not, for they that be with us are more than they that be with them” (2 Kings 6:16).  Elisha could see (spiritually by faith) the Lord’s fiery forces and prayed that his servant’s eyes (spiritual) could be opened that he, too, could behold the glorious host (2 Kings 6:17).  In this regard Joseph Smith taught that “there is no such thing as immaterial matter.  All spirit is matter, but it is more fine or pure, and can only be discerned by purer eyes [spiritually opened]; we cannot see it, but when our bodies are purified we shall see that it is all matter” (D&C 131:7-8).  Elisha’s servant simply needed “purer eyes” to see.

Note also that the Lord Himself has promised “where two or three are gathered together in my name, as touching one thing, behold, there will I be in the midst of them—even so am I in the midst of you” (D&C 6:32).  Later, the Savior confirmed this by telling a group of gathered Latter-day Saints that “verily, verily, I say unto you that mine eyes are upon you.  I am in your midst and ye cannot see me; But the day soon cometh that ye shall see me, and know that I am” (D&C 38:7-8).  How precious to consider the times that Jesus Christ has been among us (and will yet be among us) when we have ‘gathered in his name.’  My great hope is that I may live worthily and consciously enough to recognize and bask in such sacred times!

While such dramatic depictions stir our souls, we must not forget the daily needs and how the Lord has provided for the daily walk and not just the extraordinary moments.  Joseph Fielding Smith has written, “We have often heard of guardian angels attending us and many patriarchs have spoken of such protection.  There are times no doubt when some unseen power directs us and leads us from harm.  However, the true guardian angel given to every man who comes into the world is the Light of Truth or Spirit of Christ.  The Holy Ghost is given to faithful members of the Church to guard and direct them; theirs is the privilege, through their faithfulness, to have such guidance and protection.”  (Doctrines of Salvation, 1:54).  We must believe that the Lord, who knows all things, is aware of our needs and their peculiar circumstances.

We must know that He can and will send whatever is requisite for those moments and trust in His care.

Naaman’s reaction to Elisha’s instruction to bath in the Jordan seven times is understandable.  Why should this powerful man submit himself to such a seemingly menial process, especially in a rival nation’s inferior river such as Jordan (see 2 Kings 5:12).  Yet, of course, the miracle he desired had less to do with the actual water than it had to do with his willingness to exercise faith in a prophet’s counsel!

During my full-time mission I had the opportunity to serve with an elder who had not yet committed to the required mission lifestyle.  This experience has ever after informed my understanding of what Naaman was suffering from and what ultimately made the difference in his life that allowed him to accept Elisha’s directions.

This particular companion had earlier been serving with another elder who similarly struggled with the rules and they had only compounded their problems together.  I was nervous at our pairing, but was also determined not to give in to any temptation to be less than what I’d covenanted with the Lord to be when I accepted my call.  My companion did not wait too long to voice his concern that we seemed to be working too hard and that we ought to not worry so much about the strictures of the “White Bible” (a.k.a. the Missionary Handbook).  He launched into several diatribes about “too many rules” and “I can’t be myself,” etc.  Not being one for confrontations (and not really sure exactly what to say anyway), I just tried to move forward doing the things we had been directed as if he hadn’t said anything.  Though he grumbled, he pretty much followed along and we began to develop a working relationship.

About a week into our time together a breakthrough came.  One morning while we were engaged in our personal scripture study—he in one room and I in another, my companion bounded into my room with his Pearl of Great Price open.  This was a bit of a surprise for several reasons.  For one thing, he hadn’t seemed fond of reading his scriptures in the first place.  Additionally, he seemed excited and happy—something I really had not seen in him until then.  At any rate, my companion blurted out, “I know why there are all these stupid rules!”  He proceeded to read from Abraham’s account of the premortal council where the earth was being planned.  “We will go down, for there is space there, and we will take of these materials, and we will make an earth whereon these may dwell; and we will prove them herewith, to see if they will do all things whatsoever the Lord their God shall command them” (Abraham 3:24-25).

My companion then said something I cannot forget.  He said, “God just wants to see if I’ll do whatever he asks me to.  That’s what He’s saying here, isn’t it?!  I mean, if I want to have salvation, and God will give it to me if I just do everything he requires, then wouldn’t I do it?  Of course I would, to get salvation.  What if he asked us to stand on our heads in the corner everyday at noon and recite the Articles of Faith backwards?  I’d do it, to get salvation, wouldn’t I?!”  While the mental image he conjured up at that time (and still does) will never leave me, neither will his simple, logical reading of that scripture.  From that time forward my companion seemed to change.  He became more pliable and obedient.  He started to feel the Spirit and recognize it—and love it.  We then began to receive many wonderful miracles while laboring together in the Lord’s vineyard.  Some of the most precious experiences of my entire mission were with that companion.

It is true, isn’t it?  If we will but do “whatsoever” the Lord our God commands us, then his choicest blessings will follow.  The initial balking of my companion mirrors Naaman’s struggle to allow himself to be led by the Lord in the Lord’s way.  I know, too, that in my personal times of willful ignorance, pride and faithlessness, I remove myself from the very source of the direction, strength and gifts necessary to receive my salvation and exaltation.

Like Naaman and my companion, I must continually and sincerely submit myself to His will, remembering the promise of healing and redemption that awaits.