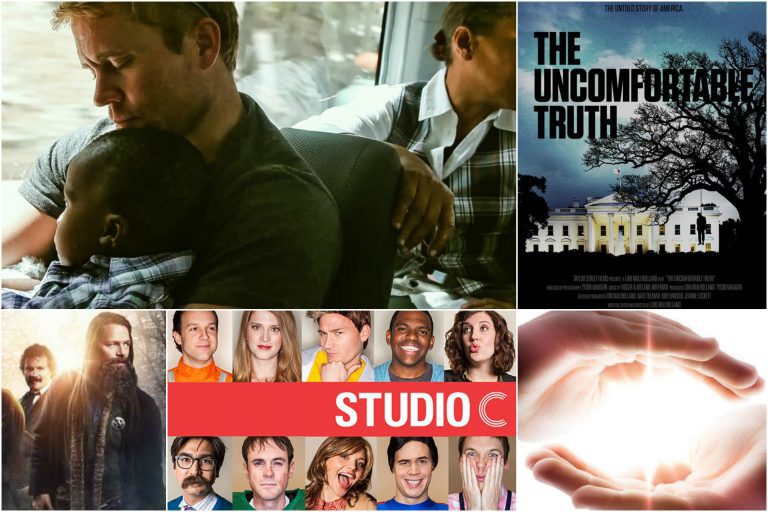 For 16 years the LDS Film Festival has been a showcase for uplifting, powerful cinema from both Latter-day Saint filmmakers and others whose films share our values. There’s a truly phenomenal lineup for this year’s festival (March 1-4 at the Scera Theater in Orem) including a Studio C documentary, a film in which Donny Osmond plays a terrorist, a 24-hour filmmaking festival, forums with filmmakers T.C. Christensen and Christian Vuissa, a Women in Film panel, a follow up to the child-slavery-rescuing The Abolitionists, and plenty of adventures, comedies, dramas, love stories, fantasy-adventures, and more to bask in. Here’s a quick guide. For more information visit ldsfilmfestival.org.

Opening night is going to feature live music by Sidecar Judy as part of the mix and mingle between attendees, filmmakers, and actors. The opening night film will be Love Everlasting, an uplifting tale of a young man’s love for his mother as well as a troubled young woman he falls for. Note that this film appears to have a non-graphic, implied love scene between a married couple.

Thursday the festival kicks into high gear with the 24 hour filmmaking marathon, in which local filmmakers have just one day to create a short film from scratch and premiere it at the festival. Previous winners have included the hilarious Warm Case, a parody of TV crime-solving shows by Telekinesis Entertainment.

Thursday also features numerous short films in special screenings and competitions. One not to miss is Hidden in the Heartland: The Great Earthquake, director Kels Goodman’s continuing series exploring archeological evidence that the events of The Book of Mormon actually took place in areas that are now the United States.

Other screenings include Peace Officer is a hard-hitting documentary about a former Utah sheriff investigating officer-involved shootings, including a fatal incident with his son-in-law.

Hello, I Love You is about a girl roped unwittingly into a reality show in which a man proposes to almost any woman he meets.

Rounding out the day is CTU: Provo, an action-comedy in which Donny Osmond plays a villain funding terrorism in Utah, with two Jack Bauer fanboys out to save the day. Full disclosure: I am the star of this flick, and I think you’ll love it. Director Alan Seawright and I are hosting a cast panel after the show.

Friday sees director (and festival president) Christian Vuissa hosting a forum on LDS film, recent developments, where it’s been, and where it’s headed. Also kicking off the day is Recommended Daily Amount, in which one man eliminates caffeine and reduces sugar to the recommended amount for 30 days to see what it does emotionally, mentally, and physically with the help of experts from the University of Utah and scientists from Brigham Young University.

Several female LDS filmmakers will host a presentation on Women in Film, challenges faced and how to make it in the business. Director Rob Diamond (Sacred Vow, Love Everlasting) will present on his experiences and working in the film industry. Several other short films will play throughout the day, most notably Searching for Gardy, a sequel of sorts to The Abolitionists in which the child-slavery-rescuers Operation Underground Railroad continue their search for the boy whose kidnapping launched the movement.

Gil Aglaure, president of film distribution company Koan, will discuss how to get your film made, marketed, and distributed. I Want Abs follows one average guy’s quest to get in shape. Filmmaker T.C. Christensen (17 Miracles, The Cokeville Miracle) will host an exclusive sneak peek at his new film Love, Kennedy and discuss the film.

Filmmaker Loki Mulholland (maker of the excellent An Ordinary Hero) explores slavery, the Civil Rights movement, and ongoing racism in America in The Uncomfortable Truth. Sure to be a powerhouse film.

Magellan tracks the adventures of an astronaut sent to investigate mysterious signals coming from space, his travels having lasting consequences on mankind’s understanding of science and the astronaut’s relationship with his wife.

Mythica: Godslayer is the fifth chapter of the globally popular fantasy. Here a woman fights to protect the gods, and the world, from a king’s zombie army. With Kevin Sorbo (Hercules: The Legendary Journeys).

Sacred Vow tells the story of an unfaithful husband, the wife who won’t give up on him, and the healing power of Jesus Christ.

An LDS Film Forum will feature prominent members of the Mormon cinema community discussing the future of the genre. The Mormon Connection is an uplifting travel documentary in which three friends traverse the globe relying solely on the kindness of members of The Church of Jesus Christ of Latter-day Saints.

The Laughter Life is a hilarious documentary going behind the scenes of the BYU-TV comedy hit Studio C.

Modifying Reality explores the legacy BYU’s Animation program; many have gone on to Disney, Dreamworks, and Pixar. The Last Descent is a bittersweet true story of a Latter-day Saint who got stuck in the Nutty Putty caves, and the valiant attempts to rescue him.

In 626 Evolution an amnesiac with superhuman skills protects a teenage girl.

Moose: The Movie finds a park ranger and a beautiful librarian battling an ancient monster.

An awards ceremony and numerous short films will also be featured on Saturday. Tickets for all events are available at 801-225-ARTS, online at scera.org or at the door.

Jonathan Decker is a licensed marriage and family therapist, an actor, an author, and a television personality. He is slated to present a lecture series on “Stepfamilies and Adopted Families in the Gospel” at this year’s BYU Education Week. He will also be a panelist at Salt Lake Comic Con’s FanX in March. For his relationship tips, family media reviews, and Gospel articles follow him on Facebook, Twitter, Pinterest, YouTube, or LinkedIn.

Thanks for writing this story to help spread the word about the LDS Film Festival! I have participated for many years and look forward to it each year. I would sure love it if you included my film as well - "Over the Hill Dunker". It will play on Saturday at 12:30 pm. Here's the trailer: https://www.youtube.com/watch?v=DH3iPDNnyEg thanks!

Many festival films, if not picked up for distribution, make it onto Netflix, Amazon, or YouTube.