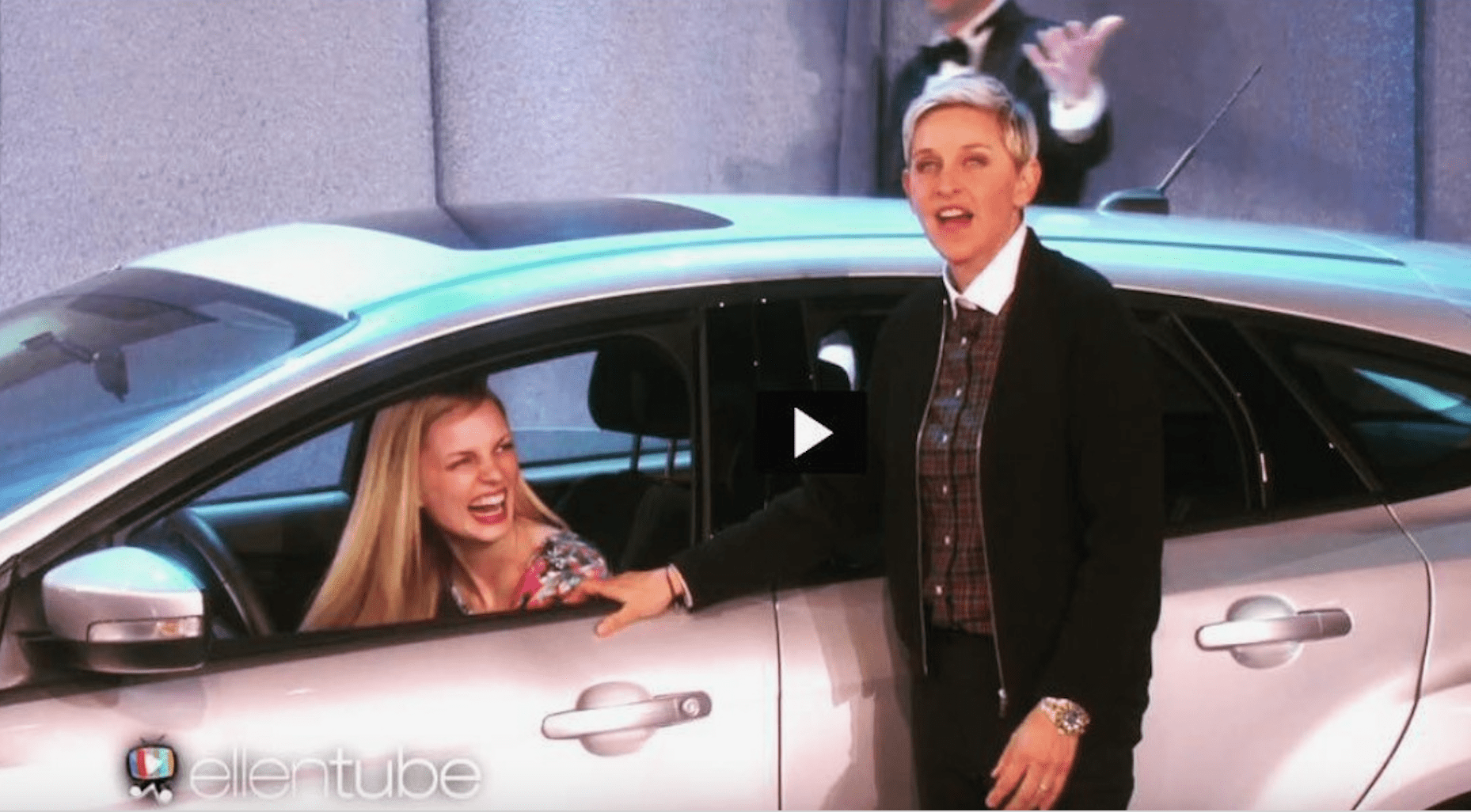 “Hi, is this Carly?” came an unfamiliar voice on the other side of the phone. “I’m an intern on the Ellen Show and I saw the story you submitted to us. We want to bring you to Burbank for a VIP tour of the studio.” Stunned, Carly hung up the phone with plans to fly to California, stay in a nice hotel, have her own personal driver, and tour the studio where Ellen filmed her show.

Just a few days earlier, Carly had found an opportunity on Ellen’s website to write a short paragraph about why she needed a new car. Between classes at BYU and her busy schedule, she quickly wrote a paragraph detailing never owning a car and getting around to volunteer and substitute teach on a bike without breaks or 90-minute bus rides.

After submitting her response, she didn’t think much of it. Even when she was invited to tour the studio, she made no assumptions. When she arrived on set of the Ellen Show, they led her to a waiting room with delicious snacks and told her she may or may not be able to see the show that day, depending on whether all the seats were filled.

Finally, her tour of the studio began, and Carly was a little speechless, yet completely oblivious to what was just around the corner. The “intern” (who was actually Ellen’s producer) told her they could tour the stage since no show was going on then. When Carly walked onto the stage, she was greeted with cheers and clapping. Ellen was sitting there on her couch with a smile.

It felt like a dream and Carly was shaking from excitement and shock. As quickly as she realized she was being filmed on the Ellen Show, Ellen herself announced that Carly was receiving a car. With all the exuberance springing out of her, Carly jumped around with gratitude and joy. It all felt surreal. She didn’t know in that thrilling moment, but this car would take her further than she anticipated.

One week later when the show aired, Carly had her first shift as a temple worker. In so many ways, she had won the lottery—a free, brand new car that was much needed—but the joy she felt in the temple was different in a noticeable way. It was lasting and distinct. So many people were excitedly congratulating her, including a temple patron who stopped her to ask if she had been on the show that day, but they didn’t see that what was more significant to Carly was being able to work in those sacred walls.

Carly was feeling the Spirit more and more in her life, and the Spirit seemed to be constantly nudging her to apply for a semester at the BYU Jerusalem Center. With her meager rations as a substitute teacher trying to pay for normal tuition and life, paying for an expensive study abroad felt like an impossible feat. When talking to one of her professors, she offered the idea of doing a two-week trip there instead, but he told her it would pale in comparison and to not give up. She applied for scholarships and grants but it wasn’t coming together and the deadline to apply passed.

Every time she got discouraged, however, she would meet someone who had just been at the Jerusalem Center or someone in one of her classes would say something that kept Jerusalem at the forefront of her mind. It was then when she received a check in the mail from Ellen to cover the taxes for her car. In essence, the letter said, “Keep the change,” and the change was an extra $3000—the exact amount she needed to pay for her study abroad.

Knowing it could be too late, she quickly put together all of the paperwork to apply for the Jerusalem Center. For yet another shock of the semester, she got a letter in the mail accepting her to the Jerusalem Center for Spring/Summer 2016. With all the exuberance you saw in the above video, she danced around her apartment with tears in her eyes and the letter in hand singing “Miracles Happen” from Princess Diaries.

Jerusalem stirred Carly’s soul and changed her. She reveled in walking where Christ walked and learning about the culture, history and religion that saturated the sacred city. She also looked forward to taking a break from dating, which she vocalized to a guy named Dave in her group. Ironically, three months later while spending a week in the Galilee with their group, they would separately receive the impression that they were going to marry each other.

Unbeknownst to Carly, Dave had also had strong nudges from the Spirit to go to Jerusalem that semester. In fact, the Spirit had specifically told him he was going to meet his future wife there. When Carly boldly told him at the beginning of their Jerusalem semester she was glad for the dating break, he subtly checked her off his mental list of candidates, only to find at the end that it was her all along. The long bus rides all over the Holy Land gave them time to talk about everything, and they found that though they were quite different on the outside that they had a lot in common—their hearts were the same.

Carly and Dave got married soon after their semester and since have settled in Seattle, WA and have two kids with the middle names Magdala and Tiberias to honor the Galilee where they fell in love.

Since their family is growing, they felt like it was time to get a bigger car than “the Ellen car” Carly had received, but something didn’t feel right about selling the car that was so freely given to her—the car that enabled her to get to Jerusalem, meet her husband and changed her life. Recognizing this wasn’t an option for everyone, she felt like their finances were such that it was important they give the car away to someone else who needed it.

Thinking of her earnest, college-aged self getting this miracle, she reached out to her old professor, Chad Emmett, to see if he knew of anyone who could use the car. Ellen hadn’t vetted her intensely, looked into her background or confirmed all the facts before offering her this car, and she wanted to do the same. Whoever Chad suggested to her was the right choice.

As abruptly as Carly got a call from Ellen’s “intern”, Thomas, a former student of Chad’s, received an email from Carly telling him it wasn’t a scam and that she felt like he should have their “Ellen car”. Thomas, who is starting a baking business but didn’t have a car, was amazed and in a little disbelief as he told his friends and family on social media. They all called it a miracle.

Carly was hesitant at first to let Thomas share her name with the news of his car, but then she thought, “I feel like me getting the car in the first place was a miracle, like God was orchestrating it, and I felt like God was continuing to orchestrate this for Thomas. Why not share about God working in someone else’s life?”

She didn’t know when she stepped out in front of that cheering studio audience that she would be getting much more than a car from this generous gift. Likewise, though she doesn’t know what all passing the car along will do for Thomas, she knows that generosity can be a catalyst for truly life-changing miracles.

Wow Seattle! We live in Kent. Great hearing your story and jealous about the Jerusalem opportunity. Inspiring though and very happy for you and yours!

Way to go, Carly. You truly blessed many lives, and I'm sure this is just the beginning!