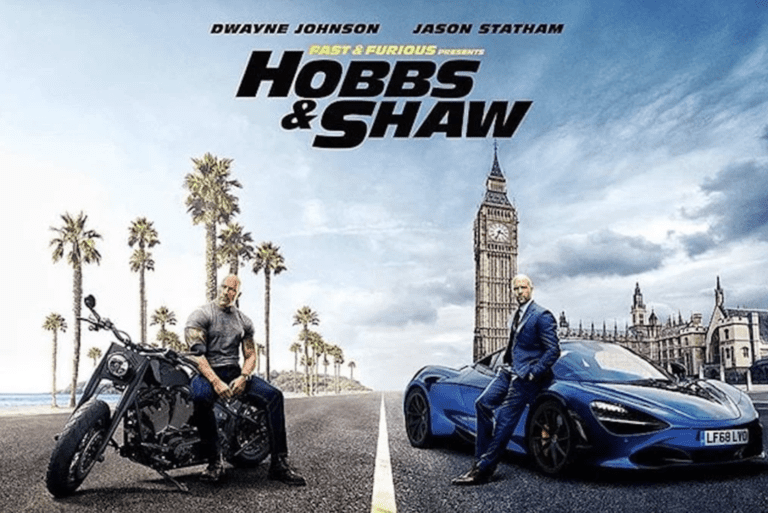 Spies. Tough guys. Weapons. The end of the world. This adrenaline-packed action comedy is a spin-off and number 8 in the Fast & Furious franchise.  You don’t need to have seen any of The Fast and the Furious movies before to enjoy this movie; it works as a stand-alone film.

If you’re a Dwayne Johnson or Jason Statham fan, you’re going to get a kick out of their love/hate buddy relationship. Directed by David Leitch, this movie is exactly what it promises: high octane.  David Leitch was a stuntman in John Wick and Atomic Blonde.

If you like the trailer, you’ll like the movie.  I attended a screening in a theater in Lehi, Utah that had a cool way to showcase scenes from the movie in a lobby feature: two chairs were rigged to rumbling seats that reacted to the action sequences. That’s how the movie feels.  Most people agree the movie is pretty ridiculous but admit that doesn’t mean it’s not fun.

The movie is very self-aware, which allows it to be more fun and playful than any of the other Fast & Furious movies in the franchise.  Dwayne Johnson and Jason Statham have great chemistry together and have some hilarious banter. The supporting cast is also fantastic: Idris Elba, Vanessa Kirby, Helen Mirren, Ryan Reynolds, and Kevin Hart.  Dwayne Johnson’s actual cousin (Joe Anoa’i) plays his brother in the movie.  He performs his signature wrestling movies “The Samoan Drop” and “The Spear” during some action sequences. Fans of The Crown will enjoy seeing the lovely Vanessa Kirby play Jason Statham’s sister. That award-winning TV series is fantastic, by the way.

There is a lot of humor and funny fight sequences.  The stunt team does impressive work with hand-to-hand combat, as well as with cool spy gadgets.  There are a lot of pop-culture references and Easter eggs for fans.  The soundtrack hits hard, just like the stars. Some might say this movie is filled with “toxic masculinity.”  If overcharged testosterone bothers you, do NOT watch this movie.

The movie is certainly ridiculous and even cheesy at times, but that’s part of the schtick. You get to visit Samoa during Act 3, which makes the film look really different from the rest of the movie.  It’s a long movie, but you’ll get out of the heat for a couple of hours.

Some interesting lines that also illustrate themes and worthwhile messages in the movie.

My wife and I saw this movie last weekend. Entertaining, but Hobbs & Shaw is so far over the top that it hits low-earth orbit. In contrast,we liked the more real feeling of The Fighting Preacher and The Other Side of Heaven better than Hobbs & Shaw, Spiderman, or even The Lion King. Maybe our tastes have changed, but we feel the recent releases of movies geared toward members of the Church of Jesus Christ of Latter-day Saints have been surprisingly refreshing when compared to the non-stop, pounding action of the Hollywood films.