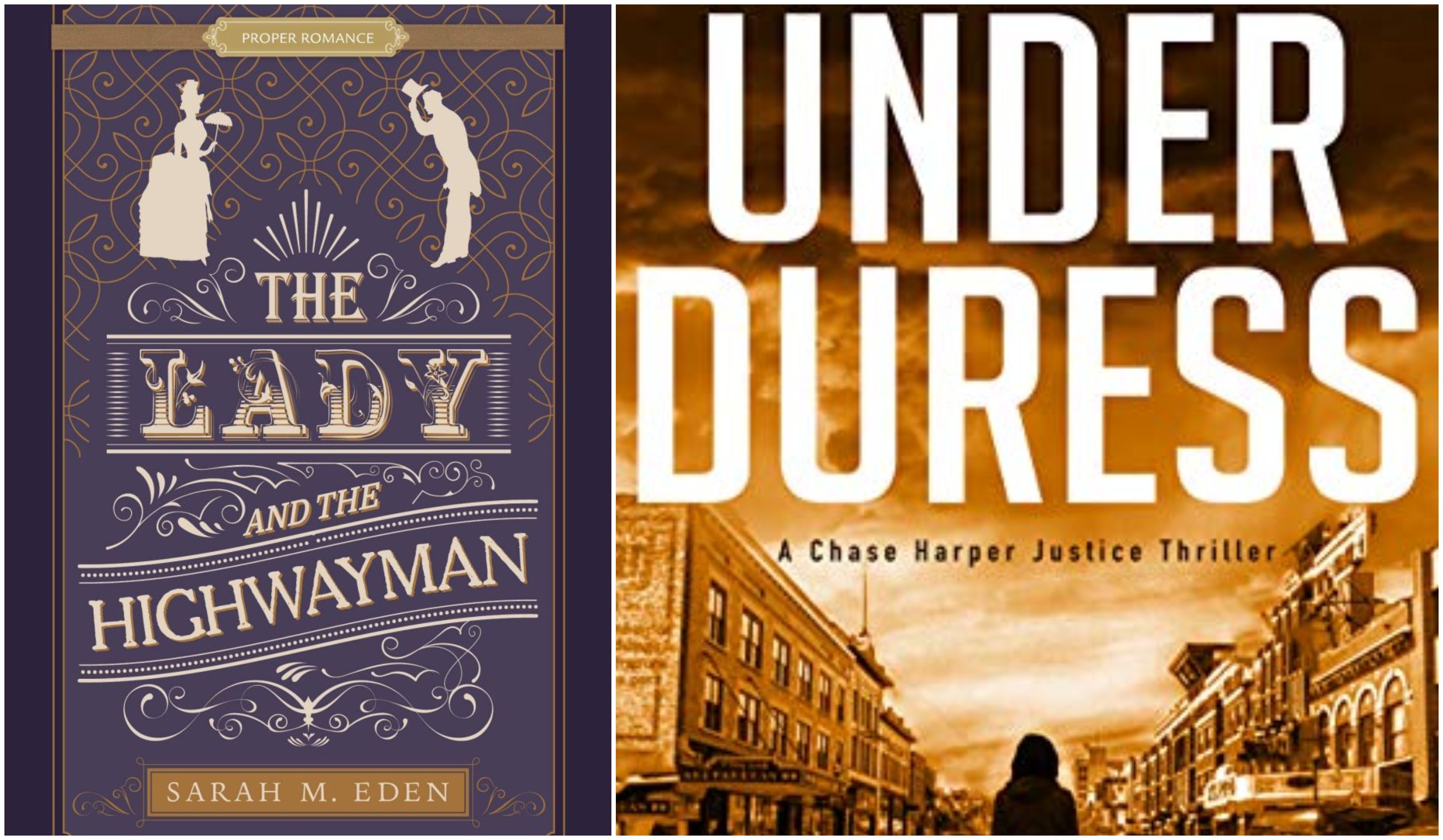 Call it innovative or call it confusing, Sarah Eden introduces her readers to two stories within a story. The Lady and the Highwayman is a social justice story set in the 1800s. Fast forward to the present and we find Rusty Ellis’s Under Duress still fighting those who would enrich themselves at the expense of others, especially the less fortunate.

THE LADY AND THE HIGHWAYMAN by Sarah M. Eden

Instead of a straight forward story, Sarah M. Eden tells two stories within a third story in her new release The Lady and the Highwayman. This makes the first quarter of the book highly  confusing until the reader can straighten out in his or her mind that the two main characters, Elizabeth Black and Fletcher Walker, are writers with the stories they are writing filling many of the chapters.

Elizabeth is a head school mistress for a London girls’ school in the middle 1800s. Her school is specifically designed for middle class girls in a time when it is common for only upper class children, and mainly boys only, to receive an education. She also writes novels intended for middle to upper class readers. Secretly she also writes for the Penny Dreadfuls, a dramatic form of gothic novel, as “Mr. King.”

Fletcher grew up a poverty stricken urchin who worked hard and finagled his way to a middle class lifestyle, but never forgot his origins. He is involved in an organization that rescues street urchins from poverty, slave labor and prostitution. Funds for his work come from his proceeds as a writer of the Penny Dreadful novels. When the unknown Mr. King’s novels become more popular than his, he sets out to discover the author’s identity and try to persuade him to join the cause he and most Penny Dreadful authors ascribe to. As Fletcher searches for Mr. King he is unaware that the head school mistress he has befriended is “Mr. King”. She guards her identity as she joins him in several endeavors to rescue young girls slated for prostitution, a severely abused chimney sweep, and other such poverty stricken, orphan children of the London streets.

The style of this novel appears to be directed toward a younger audience more than Eden’s other novels both in language and in the content of the Penny Dreadful secondary stories. Both Elizabeth and Fletcher are likable characters, but seem a little immature for their roles. The various children in the story are delightful and the villains are easy to despise. Though the story doesn’t hold a lot of surprises, the anticipation of expected reactions and situations is fun and satisfying. The overall story is a reminder of past inequality, is well researched, and a reminder of how far society has progressed in two hundred years. The romance portion of the story is predictable as is usual in most romances, but is handled well, including the matter of Elizabeth and Fletcher coming from different classes during a highly class conscious period of history. Don’t let the boring cover steer you away from a story that is both entertaining and educational. Not only Sarah Eden fans will find this novel a worthwhile read, but Charles Dickens fans will be touched by it as well.

Sarah M. Eden is the recipient of numerous prestigious awards for her historical and Proper Romance novels. This prolific writer has a degree in historical research. She lives with her husband and children in Utah.

THE LADY AND THE HIGHWAYMAN (Proper Romance) by Sarah M. Eden, Published by Shadow Mountain an imprint of Deseret Book, 352 pages, Soft Cover $15.99. Also available on audible and for eReaders.

UNDER DURESS by Rusty Ellis

Chase Harper is a retired Army Ranger who agrees to do a favor for a friend. The favor involves accompanying the man’s son to his first duty assignment at Minot Air Force Base in Minot, North Dakota. The trip goes well until they reach Minot and decide to visit a small pawn shop. There they witness more than they should. Seeing a woman leave in tears, minus something of great value to her, stirs Chance’s strong protective sense. His attempt to correct what he perceives as a great wrong lands him smack in the sights of a strong-arm offshoot of the mob.

Sara Clark recently lost both her husband and her mother. Left alone to raise her two young children she struggles to keep the house she inherited from her mother and provide stability for her children. Other than her children her most valued possession is the diamond ring her husband gave her on their wedding day. Her salary as a nurse meets the requirements of her family’s daily life, but doesn’t cover the large payments she inherited along with the house to the loan shark at a local pawn shop. When she’s a few days late with her payment “Fat Joey” backed up by a huge muscle man, demands her ring and insinuates a refusal would put the little she has; her car, her house, or her children, in danger.

As Chase becomes aware of the corruption and evil being perpetrated against Sara and other people like her in the town he makes it his business to get involved. His war against Fat Joey becomes personal as he becomes more involved with Sara and when the crime boss sends his enforcement goon after him.

Like Ellis’s other novels the action is fast. There is some physical violence, but the emphasis is on out-witting the opponent. The characters are likable and the dialog believable. Followers of action thrillers will enjoy this one.

Rusty Ellis was born in California, then in many other states where his father’s Air Force career took him. He now lives in Las Vegas, Nevada. He is retired now from active law enforcement duty. He and his wife have six children and 11 grandchildren.