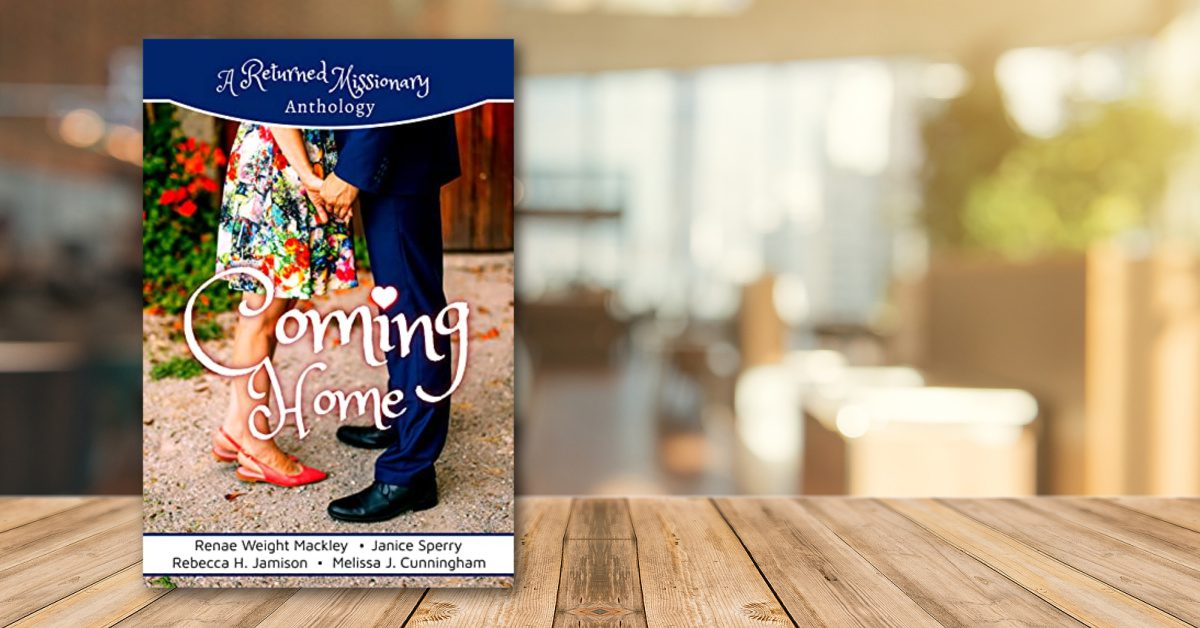 Novellas have become increasingly popular in recent times. These are stories, shorter than novels, but longer than “short stories.” Usually, three or four novellas sharing a general theme are compiled together as is the case with the soon-to-be released series, The Heart of the Frontier which includes a novella by me.  Sometimes a single novella is used to complete a series of full length novels. Occasionally several novellas in a series are packaged separately such as with the popular Romance on the Orient Express series. A fun collection of novellas released this month under one general title for young adults and adults of The Church of Jesus Christ of Latter-day Saints is Coming Home, A Returned Missionary Anthology by Renae Weight Mackley, Janice Sperry, Rebecca H. Jamison, and Melissa J. Cunningham. Each novella is the story of a different returned missionary and his or her adjustment to being home, re-entering the dating scene, and the differences between their new reality and their previous expectations, Romances with a different twist. Each novella in this series stands alone, but secondary characters in one story become major characters in another story.

Tyler returns from his mission with his family and friends there to meet him at the airport. They’re all there–except Raychel, the girl he hopes to marry. Tyler and his best friend, Patrick, have both had a crush on Raychel since junior high. Patrick took her to Prom and left on his mission a few months after Tyler. Might Raychel have chosen Patrick over Tyler? And how does Raychel’s decision to serve a mission enter into or alter either Tyler or Patrick’s plans?

Renae Weight Mackley is a mother of six, has a BS degree from Brigham Young University and has lived on both the east and west coasts of the USA.

John has had a problem with porn since his early teens. He worked hard to overcome it, talked with his bishop, and eventually received the mission call he so desired. He served an exemplary mission, but on his return home, the old cravings return. He’s anxious for his girlfriend, Karilynn to return from her mission, but when her shy, best friend, Daila, invites him to a YSA activity, he can’t say no. She only asked him out as a favor to Karilynn to keep other girls from chasing him. He agreed, to keep his mind off his old nemesis. Neither expects the feelings that override their best intentions.

Melissa Cunningham lives in northern Utah with her husband and kids. She is the award-winning author of The Reluctant Guardian series and the Out of Terratir series.

Karilynn’s mission homecoming isn’t quite what she dreamed it would be. Neither her boyfriend nor her best friend are there. They married each other two days before her arrival. Feeling lost and alone, she struggles to get through the summer until she can move to Rexburg for college. Her brother’s long time best friend is also lost and alone since his girlfriend married her brother. They find themselves spending time together as a kind of defense from the girls anxious to date handsome returned missionary, Patrick, or introduce either of them to a cousin, friend, or some other “sweet spirit.” As they struggle to overcome their similar disappointments a bond grows between them, but is it one that will last? The dialog in this one is particularly realistic and enjoyable.

Janice Sperry, with her husband and three children, lives in the Salt Lake Valley in Utah. She graduated from Snow College and Westminster College in Utah. She is the author of The Rebel Princess and has had short stories included in several anthologies.

THE DANCE by Rebecca H. Jamison

Mari suspects the bishop called her to co-lead their college Family Home Evening group because she’s black and the other leader, Nick, is the only black male in their ward. He assures her that isn’t the case, she still feels a little reluctant because she has a boyfriend, Carter, a young man she taught on her mission who is now preparing to also serve a mission. She not only plans to wait for him, but to help him financially since he’ll receive no help from his disapproving family. Nick finds himself falling hard for Mari. He dated Gabriella before his mission, but isn’t interested in her now, though she tries to renew their old relationship. She helps him arrange jobs for him, Patrick, and Carter at her mother’s dance studio. Will dancing together reignite old flames or will it call for a change of partners?

Rebecca H. Jamison grew up in Virginia. She received both a BA and Ma from Brigham Young University. She published the Latter-day Tales series along with several novels and short stories.

All four of these stories are well-written, fun, and display firsthand knowledge of the intricacies for returned missionaries of resuming college, dating, and making eternal choices. Though each story stands alone well, the added connection of minor characters becoming leading character in another novella adds to the overall theme. Though the book is particularly slanted toward young adults, older readers will enjoy it also. The stories are set primarily in Northern Utah and Rexburg, Idaho. I recommend Coming Home for the enjoyment of any Church members who enjoy reading.

Will these books eventually be sold at Deseret Bookstore? And, available on Bookshelf Plus?