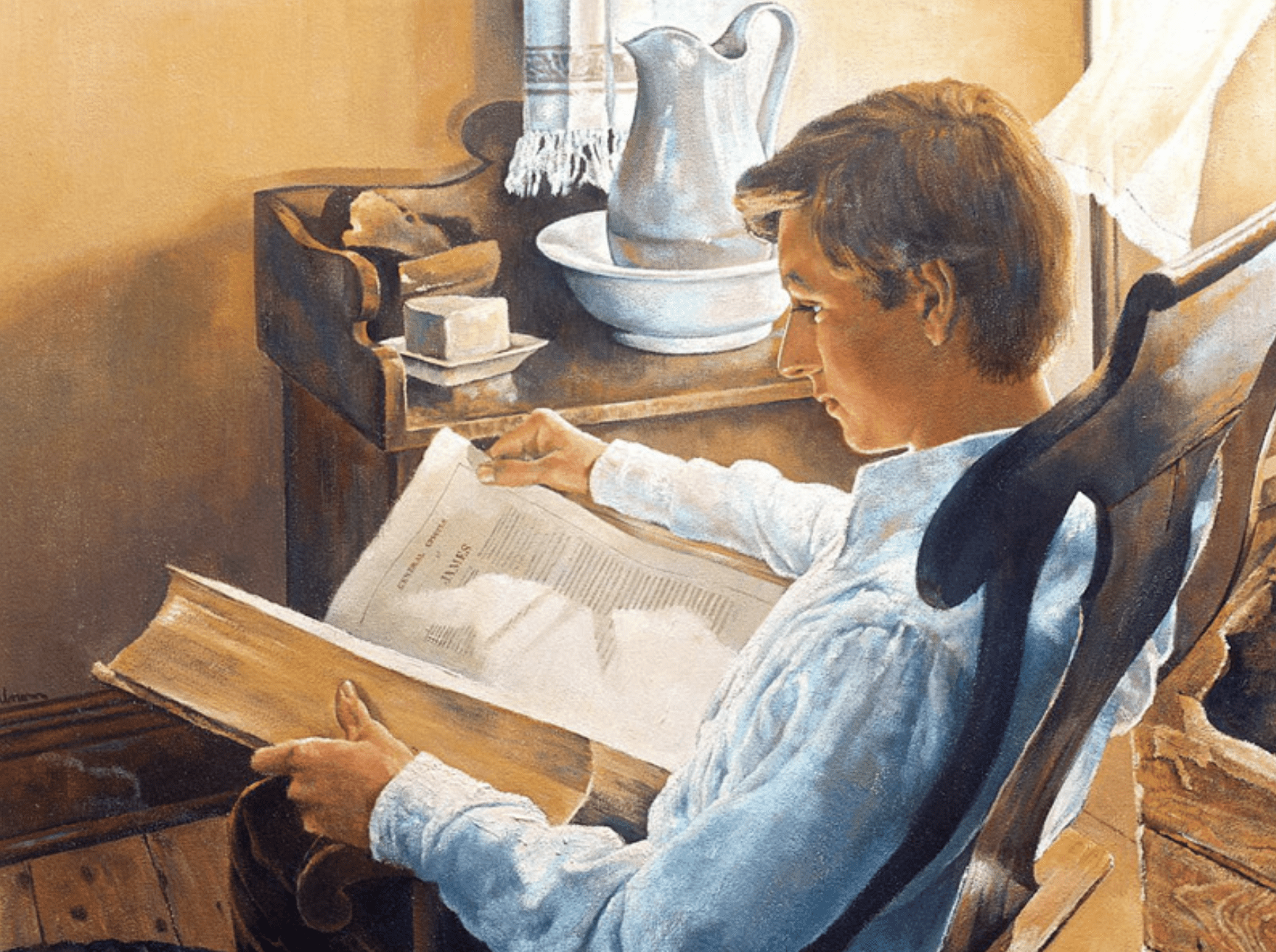 To read the previous article in the series, CLICK HERE. Cover image via LDS Media Library.

Although the Prophet Joseph Smith had a limited formal education, he possessed a native curiosity and was simply brilliant in the ideas he contemplated. His education was unlike any other of his day. His mother observed that Joseph “seemed much less inclined to the perusal of books than any of the rest of our children, but far more given to meditation and deep study.”

Joseph’s mind was enlightened and enlarged over time by the Lord. He was literally heaven-taught and angel-tutored. Joseph said, “Could you gaze into heaven five minutes, you would know more than you would by reading all that ever was written on [a] subject” (Times and Seasons, 15 Sep 1843, 331). And Joseph had that opportunity to look beyond the veil many times.

Once the Spirit had expanded his spiritual understanding, everything took on new meaning. The Lord told Joseph, “All things unto me are spiritual” (D&C 29:34), and that included learning of every kind (see D&C 88:77-80, 118). Joseph took it to heart. He showed interest in every field of learning. He was fascinated with learning languages: “My soul delights in reading the word of the Lord in the original, and I am determined to pursue the study of languages until I shall become master of them” (Joseph Smith Papers, 17 Feb 1836).

I used to give students at BYU the challenge to search out what the Prophet Joseph Smith had written or said pertaining to their majors. Students were amazed to discover that almost without exception, they were able to find something pertinent.

An editor for the Toronto Star wrote, “No matter what anyone might think of him, Joseph Smith, the Mormon Prophet, was one of the most dynamic and creative men of the nineteenth century” (see LDS Church News, 2 March 1968, p. 6). During Joseph’s lifetime, the New York Times stated, “Joseph Smith must be set down as an extraordinary character…one of the great men of this age” (4 Sep 1843).

In his 1933 biography Joseph Smith, An American Prophet, John Henry Evans noted: “Perhaps the Prophet’s greatest appeal, to his disciples particularly, came from his ideas. For his mind gave off ideas as thick and fast as an emery stone gives out sparks under the pressure of the blade. Nothing was too trivial or too big to occupy his thoughts. He talked about tea, coffee, and tobacco; about the hours one should sleep and work; about whether the human epidermis changes every seven years; about laying out a city that would give a town and a country effect in one; about how to eliminate both poverty and riches from our present economic system; about the arrogance of those who come into power too soon; about the ‘planet that is nearest the throne of God’; about the much mooted question of his day as to whether the earth and man were created out of nothing or out of pre-existing matter; about the freedom of the will; about heaven and hell and whether there is a devil; about God and the true immortality of the soul” (pp. 9-10).

Every teacher appreciates students who acquired a thirst for learning. The Prophet Joseph acquired spiritual knowledge because of his bright and inquisitive mind. He literally experienced the blessing promised by the Savior in His Sermon on the Mount: “Blessed are all they who do hunger and thirst after righteousness, for they shall be filled with the Holy Ghost” (JST Matt. 5:8 and 3 Nephi 12:6).

Brother Marsh, this article is an excellent insight into the Prophet Joseph Smith. One small clarification, The New York Times did not begin publication until 1851. I believe the quote attributed to them comes from The New York Tribune which published from 1841-1924. It is an interesting quote by a contemporary press. Thank you for bringing it to our attention.