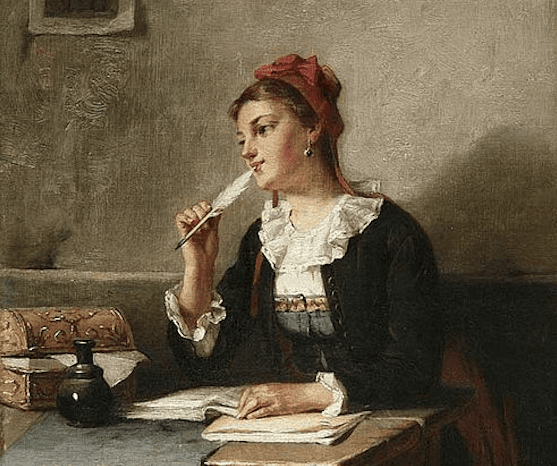 Jane Austen Meets the Wild West: Letter From a Young Woman in Kirtland

Jane Austen died on July 18, 1817.  Twenty years later, on July 22, 1837, a young woman named Eliza Ann Carter penned a heartfelt letter to a young missionary named James Chauncey Snow. This letter was kept by that missionary. In fact, that letter was passed down through his descendants for the next 180 years until it was rediscovered in a chest by a great-great-great grandson of James Chauncey Snow.  He then shared it with me.

When I read the letter, I felt like I could have been reading a passage out of “Pride and Prejudice” or “Sense and Sensibility“. It was obvious that Eliza Ann Carter had tender feelings for James Chauncey Snow.  Her letter was part “expressions of love and devotion” and part “keen observer of turbulent Kirtland” as the following excerpts show:

“I often think of the happy hours that we spent together and do anticipate the day when we shall meet again and enjoy each other’s society”.

“William Smith made a very humble confession to the Church with regard to his conduct the winter past—he said he was determined to forsake all and go forth and proclaim the Gospel to the ends of the earth “.

“Not while the earth shall stand, shall anyone enjoy my company but you”.

The setting for Eliza Ann was quite different than the English countryside enjoyed by Jane Austen.  Eliza Ann lived in Kirtland, Ohio; which in comparison to the English countryside, was like the “Wild West”.  The spring and summer of 1837 in Kirtland were not for the faint of heart.  Many of Joseph Smith’s closest friends had turned against him.  The newly founded “Kirtalnd Safety Society ” Bank was failing.  At the time, James Chauncey Snow was on a mission back East and  anxious to hear news of the “Church” and the “Bank”.  He was now serving a mission in Maine–in the very town where Eliza Ann had lived before she moved to Kirtland.

These are the words she sent:

I received your letter on June 28th.  And I was glad to hear that you had  arrived at St. Johnsbury, Maine in good health. You had wished for me to write as soon as I received your letter–respecting the Church and Bank.  I must confess to you of my negligence in not writing back to fulfill my word to you–and sincerely pray that you will forgive me.   You need not think that I have forgotten you in consequence of my not writing– for I have not.   I often think of the happy hours that we spent together and do anticipate the day when we shall meet again and enjoy each other’s society.

The reason that I did not write you sooner was because I had written to mother a short time before I received your letter.  I wrote to her respecting the Church and also the Bank.  I knew that you might see her and I thought that if you stopped by her place you would be likely to see my letter.  For this reason I delayed my response.   I also thought that I would wait and see how the Church bore out their difficulties before I wrote back.  I shall now endeavor to drop a few lines with regard to the Church and also the Bank.

With respect to Church, there are some who have been standing out against the heads of the Church.  They have now come and made their confession to the Church and there are some who have not. Elder Patten, Elder Marsh and William Smith have come to Kirtland.  They arrived here the 8th of July– for the purpose of settling the affairs of the Church.   It was their request to meet with the Twelve and Presidency and hold a Conference.   However,  the Twelve left– some had gone one way and some another. Lyman Johnson and Luke Johnson went to Missouri. Parley Pratt started for there but met Elder Patten and turned around and came back with him. They held counsel at Brother Joseph’s with those that were here and settled their difficulties.

We had a glorious meeting in the House of the Lord last Sabbath in the forenoon. We were addressed by our beloved Brother Patten.  In the afternoon confessions were made by William Smith, Parley P. Pratt,  Orson Pratt,  Sidney Rigdon and Joseph Smith, Jr.   William Smith made a very humble confession to the Church with regard to his conduct the winter past—he said he was determined to forsake all and go forth and proclaim the Gospel to the ends of the earth.  As for Parley Pratt and Orson Pratt, they said they were truly convinced that the charges which were laid to Brother Joseph the season past ware actually false.  They were now fully persuaded in their own minds that Joseph had done the best that he could–considering all things.   They confessed that their minds had been darkened, their hearts hardened, and they had said many things against the Prophet that they ought not to have said.

Parley Pratt has sold his stand and all his house furniture and is about take his wife Mary Ann and go East to preach–as far as New York– or some where there about.   He calculates to stay until  fall and then return back to Kirtland and settle up his business and then he will take his wife and two children and start for England.  And he will probibly stay there a number of years.

With regard to Joseph and Sidney’s confessions,  they acknowledged that they were men subjected to light passions as other men,  and that they had erred in some things as well as others.

Orson Hyde and Heber C. Kimball have gone to England.  Elder Patten and Elder Marsh have started for Missouri again.   The Church is prospering very fast.   They seem to be united and the contentions and disputations are done away with — and the spirit of God is with us.

Now concerning the Bank–the money is not good here yet–and I don’t know when it will be.   Some think that it will be good by next fall.  I understood that they were sending it out west to buy land.   It went well there and they have carried a great deal of it out of Kirtland so that it is not very plentiful here — so I was informed.

Now I will turn my subject upon something else.  We have had as fine a weather here as anyone could wish  for.  Farmers have begun to hay here— and grain is now ready to harvest.  We have potatoes, onions, beets,  green peas, beans,  currents,  cherries and raspberries now.   In a short time we shall have apples.

My health has been very poor — but it is better now.   I called for Father Smith and Brother Butterfield.  They prayed for me and anointed with oil and said that I should have my health.  I believe that I shall — if  I  keep the commandments of God.  I desire your prayers that I may be preserved from the powers of darkness and the evils which are and will come on the earth.   I feel strong in the Lord and am determined to stand fast in the liberty wherewith Christ has made me free— and hope that you are of the same determination.

I feel perfectly contented here and I do not want to go back to Newry [Maine] while I live–and I think now I never shall.   I wrote to mother that I had some notion of going home–but I have given it up.  Your folks are all well and enjoying good health.

I now say that my respects to you are the same now that they were when you went away.   The covenant I made with you shall never fail on my part.  Not while the earth shall stand, shall anyone enjoy my company but you.   And I hope that you are of the same mind.   I want to see you very much.   You must come home in October without fail.

I must draw this letter to a close for I have nothing more to write. Please write to me without fail–and let me know where you are and how you get along through this wicked and devilish generation.

(This letter was edited for length, grammar and spelling).

For me, this letter shows the incredible faith and optimism of a young woman who had embraced the new “Church of the Latter-day Saints” and  left her home in Maine and traveled 800 miles to join the Saints in Kirtland.  And, in spite of the spirit of apostasy that affected many members during that time, she remained faithful. She patiently waited for the return of the man she loved–and while he was away she asked for his prayers that she would  “be preserved from the powers of darkness and the evils which are and will come on the earth”.

James Chauncey Snow did return from his mission in the Fall of 1837.  James and Eliza Ann were married in January 1838.  As newlyweds, the tempestuous days in Kirtland were replaced by mob violence in Missouri and Illinois.  While living in Illinois in the Morley Settlement, they had their home burned down by a mob which was painted black.  Before the Saints were forced out of Nauvoo, James and Eliza Ann were sealed in the Nauvoo Temple on February 3, 1846 by Amasa Lyman–with Brigham Young and Isaac Morely as the witnesses. Like  many other early Mormon pioneers, they made the long trek to Utah.  In spite of the difficulties which arose later with the addition of three new wives into their marriage, they remained faithful in the Church.  They settled in Provo where James was the Stake President. Eliza Ann had nine children. It was never a dull day in the lives of James and Eliza Ann.  If their courtship, marriage and life were ever written into a book, I think that their story  would be just as exciting and interesting as any Jane Austen novel.

Reid N. Moon is the owner of Moon’s Rare Books in Provo, Utah.  He and his wife Melanie and their four children are members of the Edgemont 14th Ward.

SPECIAL EVENT.   For those who would like to see this letter, it will be on display with many other rare Mormon books, documents and artifacts from the collections of Brent F. Ashworth and Reid N. Moon.  This one-day event will take place on Monday, May 1, 2017, from 1:00 – 9:00 PM at  “Heirloom Art & Co.” at the Shops at the Riverwoods, 4801 N. University Ave., Provo, Utah 84604.  This event is free and open to the public. This exhibit will make a great Family Home Evening activity.  A special attraction at this event will be a display containing scriptures belonging to thirteen of the sixteen prophets–including two Bibles and a Book of Mormon that belonged to Joseph Smith.  For any questions about the event, please call Heirloom Art & Co.  (801) 802-6064.  For any questions you might have about rare books, artifacts or photographs, please email: [email protected]  or call (801) 935-1976.

Thank you for sharing this letter from Aunt Eliza Ann Carter. Loved it! Truly, life can be as beautiful, strange, coincidental and tempestuous as a good Dickens or Austen novel.

I was intrigued by the title because I'm a Jane Austen fan. When I read the name Eliza Ann Carter I immediately looked up my family history to find her as my 3rd great aunt. She was the sister to William Furlsbury Carter who I descend from. I looked through all the memories shared in Family Search and did not see this letter among the documents. The historical significance is invaluable in recounting the general feelings of that time period. Thank you for sharing this.