I Once Was Blind But Now I See | Meridian Magazine 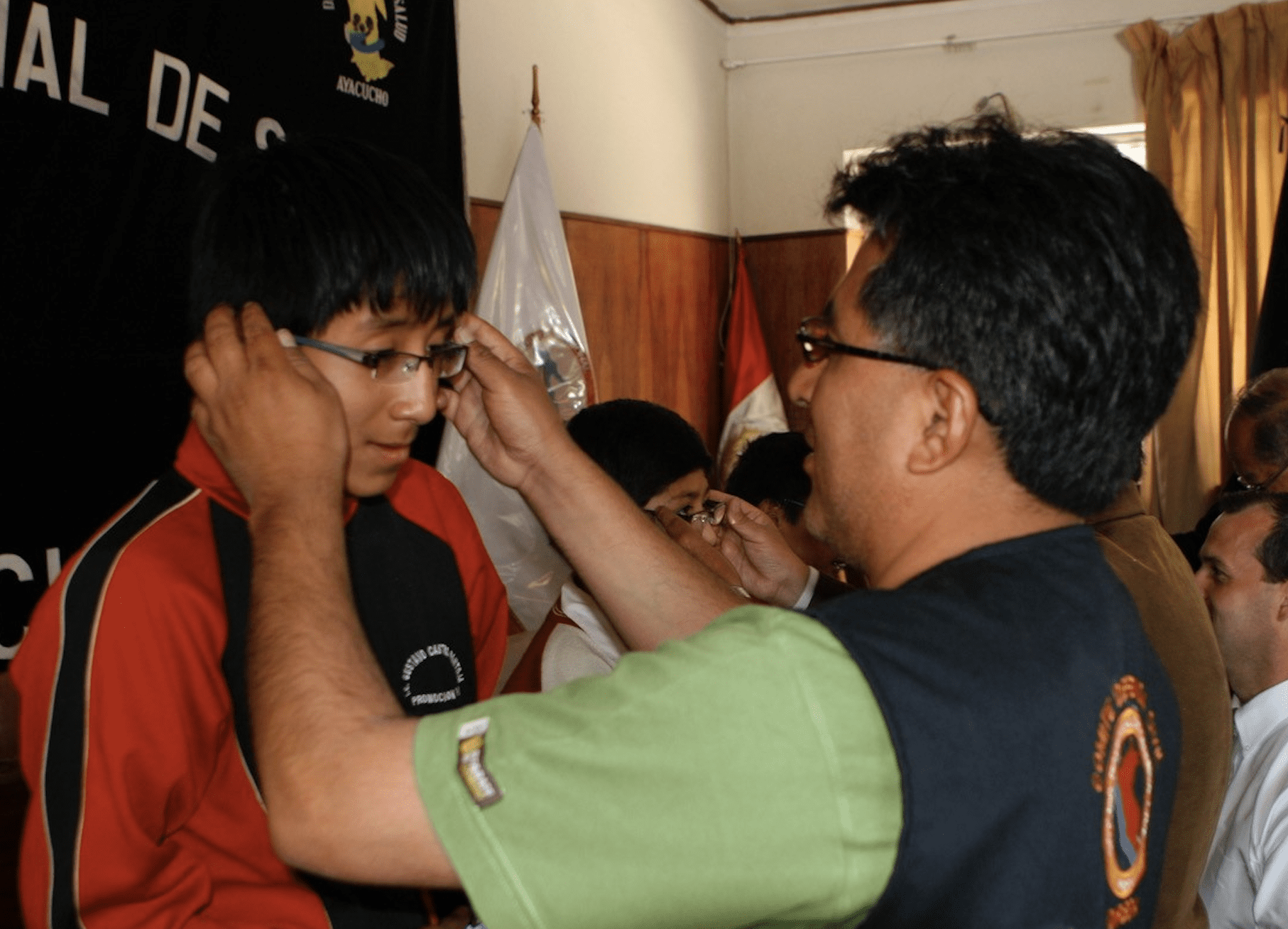 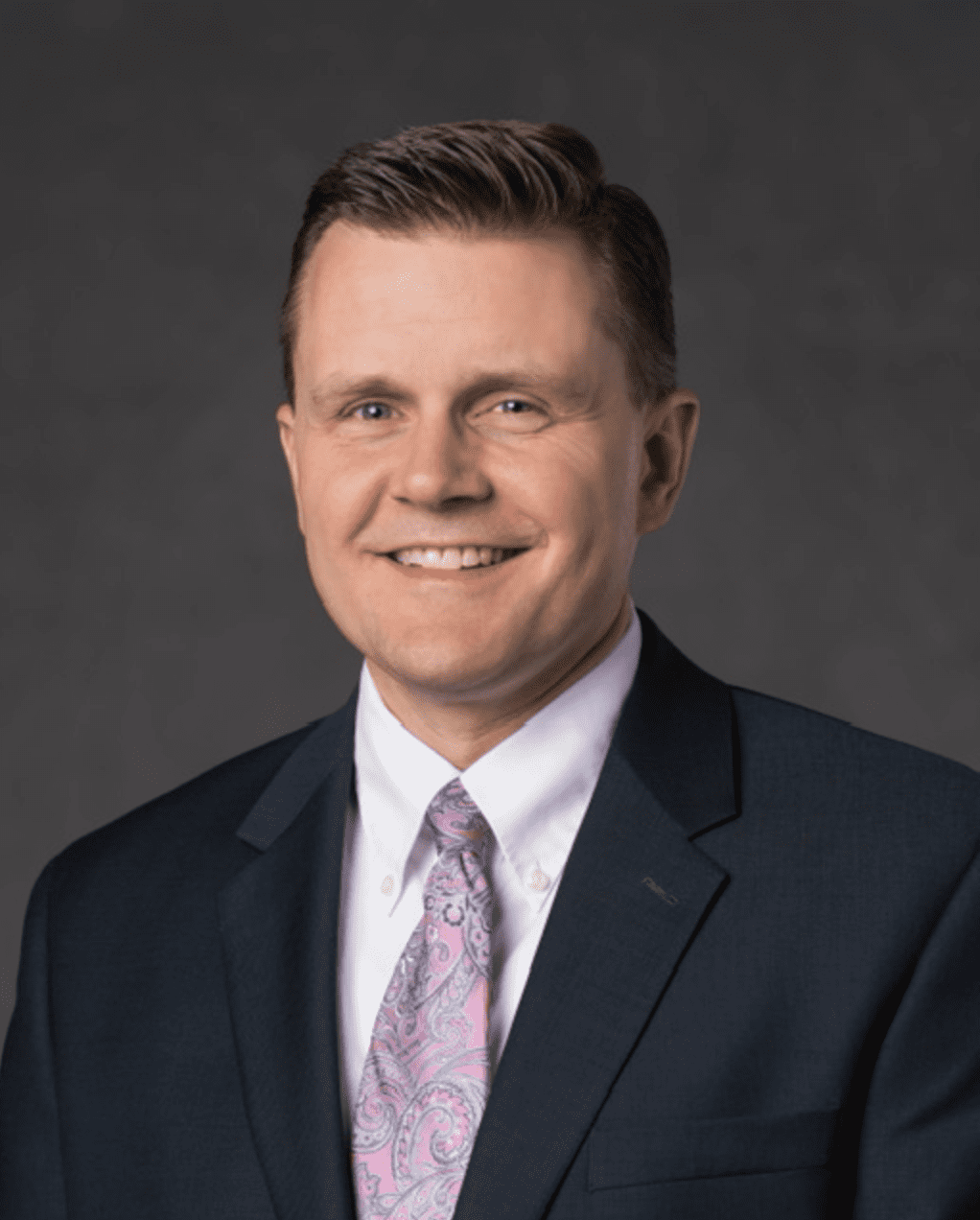 There are a number of good reasons I never went into the medical field, with my own squeamishness perhaps topping the list. I was struggling to suppress the pang of nausea that threatened to overtake me after I inadvertently glanced at a poster depicting a broad and gruesome range of eye injuries and infections. Seeing my pallor, the ophthalmologist who accompanied me grinned. I asked him how he managed to keep his own insides from revolting at such sights, and his answer fascinated me.

“When I see a problem like that,” he explained, “my mind immediately goes to work on what would have to be done to correct it.” I breathed a sigh of gratitude that sturdy, scientific souls such as himself existed in the world.

The setting was a modest doctor’s office in Ayacucho, Peru, where I was about to capture my first glimpse (no pun intended) of the Church’s humanitarian efforts related to vision care. My companion was a successful ophthalmologist from the U.S. who volunteered time from his busy schedule to share his expertise with colleagues in developing regions of the world. We were seated near a new set of screening equipment which the Church had recently contributed and were awaiting the arrival of the first of several children who had been identified, through preliminary exams at their school, as ones with significant visual impairment. It was not long before a local physician escorted the first child in. 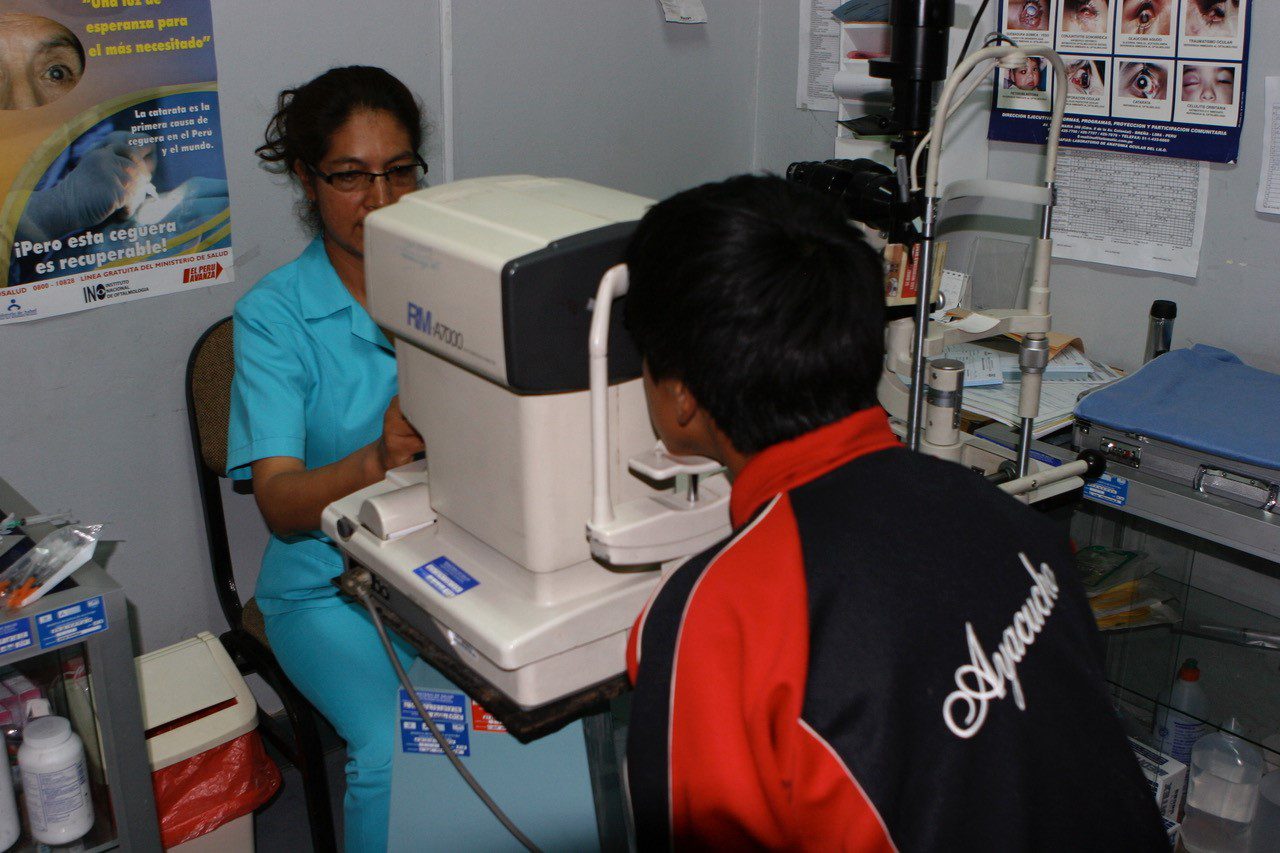 He was a boy of about 10 years of age whose name has long since escaped me. It was clear from his bewilderment that he had never set foot in an optometrist’s office before, but both doctors set out to allay his nerves. I watched as they coaxed him into the chair and had him peer into the machine, which must have seemed to him like something out of a science fiction movie. The two physicians took turns looking through the other end and exchanged comments about their observations. Once the patient was ushered out, my companion explained to me that, given his level of impairment, he was surprised that that child had been able to function in school at all. His next comment left me with anticipation: “That boy’s going to be pretty amazed when he tries on his first pair of glasses tomorrow.”

With three children of my own who had worn eyeglasses since they were toddlers, I suppose I had never conceived that there were still so many households across the globe where children went without. To exploit the pun once again, my entrance into the world of humanitarian work “opened my eyes” to that reality.

Once the screenings were finished, my companion and I rejoined Elder and Sister Joo (pronounced “Ho”), the senior missionary couple from Lima who had been arranging on a table in a separate room several new items of equipment and supplies that were to be gifted to the vision clinic. Elder Joo had recently retired from his own career as a physician, and he and his wife now dedicated themselves to carrying out a wide range of Church humanitarian initiatives across their country. Their perpetual smiles testified to the immense fulfillment they found in their work, and it was not hard to see why. Wherever we went during those amazing few days in Ayacucho, the Joos were surrounded by children who felt instinctively drawn to their gentle compassion.

As gratifying as it was to witness the enthusiasm of the clinic’s physicians and administrators at the sight of the new equipment, the event I most looked forward to was scheduled for the following day, and I was in no way disappointed. The next morning found the Joos, the visiting ophthalmologist, leaders from the local stake, several school officials, and myself squeezing into the front of a gathering hall at one of the public schools. Facing us was a group of anxious parents seated beside the children who had been screened the prior day. On a large table at the front was a carefully organized array of used eyeglasses, each with a label indicating the student for whom they were destined. This represented some quick but meticulous work on the part of the ophthalmologist and local optometrists to identify those glasses from the donated shipment that matched each child’s prescription. 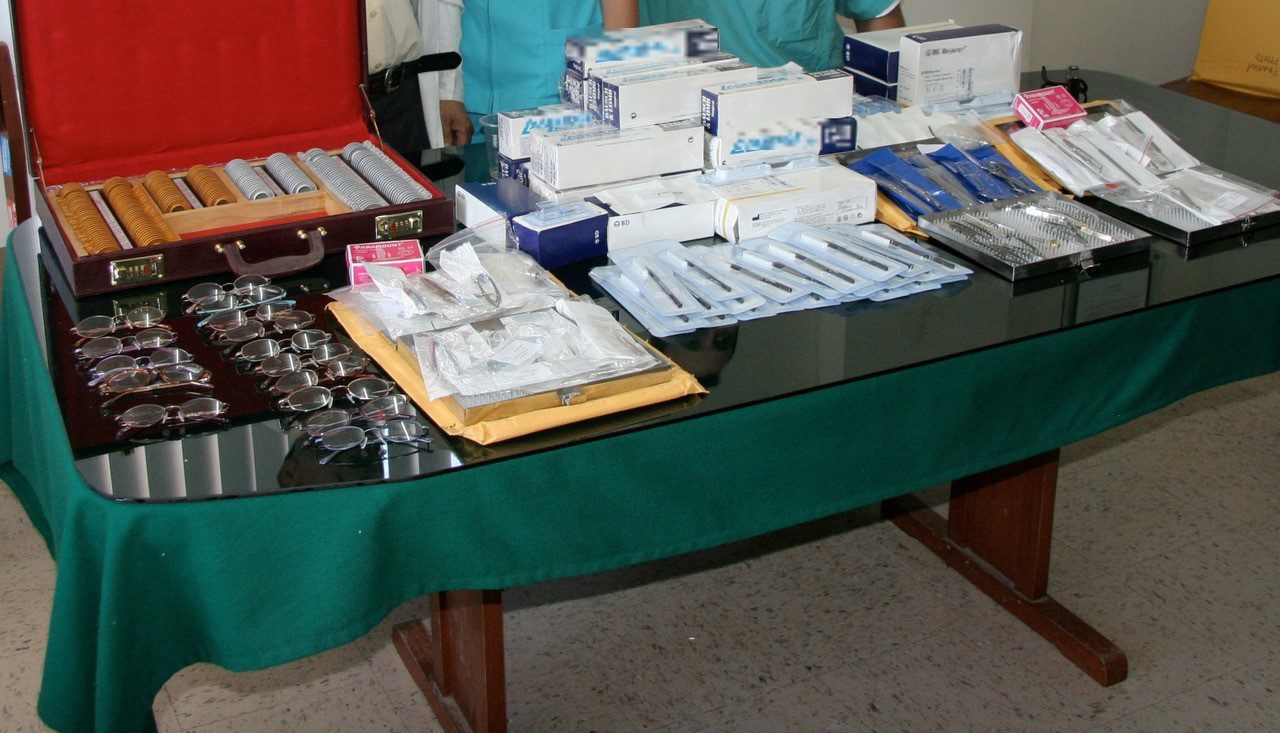 After a set of somewhat lengthy remarks from one of the school officials, during which time I watched the children fidgeting in anticipation, the moment we had been waiting for finally arrived. Each student, along with his or her parents, was invited to file past the table and try on his or her glasses for the first time. It was a scene that remains etched in my memory. The children’s initial expression would be one of perplexity, as if trying to reconcile what they were suddenly experiencing with the distorted view of the world they had become so accustomed to. Gradually, however, as they glanced at their parents and began to scan the rest of their surroundings, even the most reserved among them had trouble repressing a smile, if not an outright giggle. The styles of several of the frames were slightly outdated, causing some of the children to look as though they were trying to dress up as a grandparent, but no one seemed to mind. All such cares were lost in the face of the elation that began to permeate the room.

As I watched the transformation that came over each student and then spread to their parents, I felt moved beyond words. Biblical images of those who received their sight at the Savior’s hands flashed through my mind with greater poignance than ever before, and I exited the room, craving a few moments to simply contemplate what I was witnessing. Eventually several children rushed past me, their initial reticence having now given way to excited chatter and laughter. I noticed the first boy who had entered the examination room, and, true to the ophthalmologist’s predictions, he wore a look of confidence that had been completely absent the prior day.

When I turned away from watching him and his companions, I suddenly noticed that there were two individuals standing just feet away from me. They had approached so silently that I had not realized they were there, but I readily recognized one of the faces. Staring through a new pair of glasses that lay somewhat crookedly on her face, a small girl of about nine years of age was studying me intently. I had noticed this same child the day before and had observed that she was by far the shiest of the group. She was also one who had needed a particularly strong prescription. As I watched her now, dressed in her school uniform and gazing up at me—still expressionless—I wondered what was going through her mind. 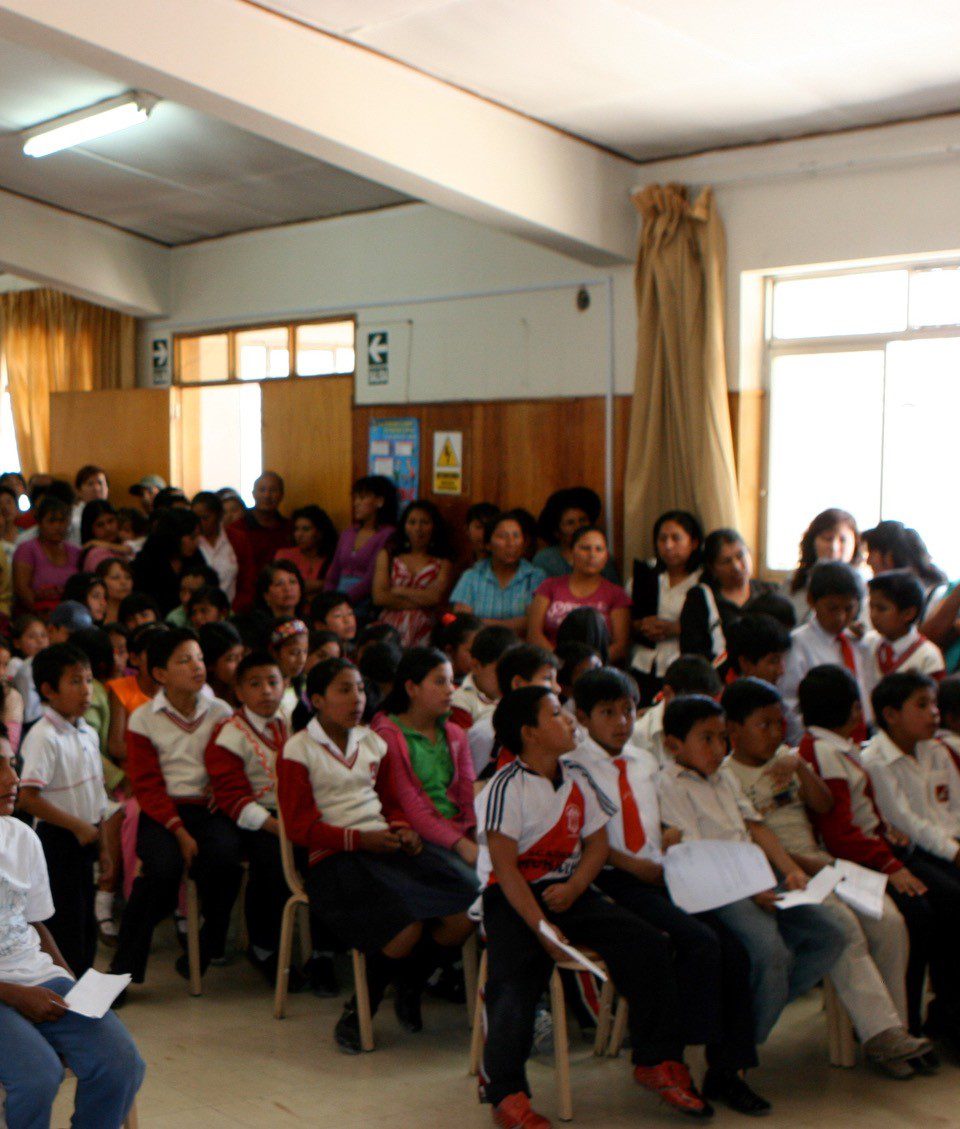 Behind her stood her mother, whom I had not seen previously. She was dressed in the typical attire of a campesina—one who lived outside the city, likely in one of the mountain villages. When she opened her mouth the words that came out were not ones I recognized. It dawned on me that she spoke Quechua, not Spanish, and I gave her a somewhat embarrassed look to communicate my lack of familiarity with her language. In return, she attempted a timid smile, and it became clear what she wanted to convey.

If I had had any doubts on that point, her daughter fully resolved them with a tender but highly unexpected act. The little girl’s stoic face, which had still not turned away from mine, suddenly broke into a grin, and she stepped forward to embrace my legs—the highest point she could reach—and momentarily pressed her head against my thigh. Though I knew that, given her enrollment at the school, the child undoubtedly could speak Spanish, no words were needed to interpret her action. Her heart was so full from the miracle she had just experienced that it longed to find an outlet, and I was the humble recipient of her gratitude, despite having been no more than an observer.

That little girl’s expression has remained with me over the years, and I often wonder what long-term ripples that simple gift might have had on her education, her self-confidence, and her life in general. I can picture her in successive visits to that clinic, each time a little older and a little surer of herself, and each time with a few new dreams which must have seemed ever more attainable. It truly is the “small and simple things” by which “great things [are] brought to pass” (Alma 37:6).