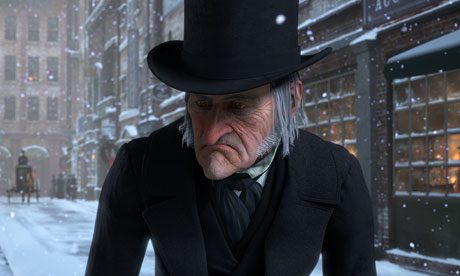 I Hope I’m a Scrooge

Editor’s Note: The accompanying photo is from the 2009 animated version of A Christmas Carol starring Jim Carrey and directed by Robert Zemeckis.

“That guy is a real Scrooge.”

What does it mean when somebody says that? That guy is tight-fisted. That guy is a miser. That guy is sour on stuff that the rest of us really love. That guy is a shrinking, closed off nay-sayer who we’d probably rather exclude from the party.

It struck me this week that it’s pretty unfair that we have claimed his name and filled it with meaning that only captures one season of his life. The reason that this story is timeless is because it is a story of a man who learns and changes before it’s too late. Yet being a ‘Scrooge’ seems to only capture this man at his worst without acknowledging the person he becomes.

Ebenezer Scrooge begins as a man, rich in business and worldly successes and poor in friends. He is a man who spends his Christmas season chasing away beggars, telling off philanthropists, and spitting on carolers. His life might’ve continued on in this way were it not for one Christmas Eve and the haunting encounter with an old business partner, Jacob Marley, who foretells the visitation of three spirits and gives Scrooge the incredible opportunity to redirect the trajectory of a life that is plummeting hell-ward.

While watching a recent musical adaptation of his story, I wondered what images my own ghost of Christmas past might present to me. What “shadows of things that have been” would be significant to enlarging my perspective on how things might be?

Dickens describes Scrooge as he observes his boyhood past as, “expending all the earnestness of his nature…in a most extraordinary voice between laughing and crying” (21). I know the feeling.

When I was perhaps eight or nine years old, I rode in a carpool to and from school that had occasion to stop at a place called Incredible Pets, so that the driver could pick up crickets for an obliging family of fire-bellied toads with whom she shared her home. To me the place truly was incredible. One December I discovered that the pet store had a child-sized swimming pool filled not with water but with rabbits.

As I am wont to do, I became fixated on the idea of having one of those rabbits for my very own. It became my Christmas wish, but I don’t think I really thought it would happen. But on Christmas morning, as we made our giddy march (in age order) down the stairs to the living room to see if Santa had remembered us, I rounded the corner and there in the spot on the couch marked by my stocking was a quivering ball of black and white fur with two long ears sticking out.

It was, bar none, the most exciting moment of my childhood of Christmases. I named the animal Floppy and it turned out to be the worst pet in the world. Turns out rabbits are insecure and seem more prone to bite than cuddle and those cages do not clean themselves out and the burden far outweighed the reward. But nothing can ever take away from that moment of rounding the corner and seeing that wishes can come true and that something distant that I longed for could actually be mine.

The failure of the rabbit to continue to be a dream is as much my fault as the rabbit’s. So fed up with the process of cleaning out and clearing off the tray that filled the bottom of its cage, I tipped the entire, foul and smelling contents down a window well of our residence hoping and assuming that no one would notice.

Worse than that I did it, is that when my Mom did notice, I lied about it. She asked if I knew who had done this and I pretended it was all very surprising to me too even though the shape of rabbit scat among a mound of pet store sawdust was unmistakably my doing.

Scrooge made errors in judgment too, which he begins to understand as the ghost of Christmas past continues to drag him on his late night stroll down memory lane. He finds that instead of desiring to keep something that he actually didn’t want like I did, he had feigned disinterest in the thing he wanted most to keep. It is with tears and bitter regret that Scrooge watches himself give up the woman he loved.

It is after this exchange that he begs the spirit to conduct him home. He can take no more.

Through the course of the story he realizes other errors in the way he has approached his life and in the end, faced with his own lonely and neglected demise, he realizes he must change or be doomed.

As I watched the actor playing Scrooge fall to his knees clinging to his bedpost so glad to be back in his familiar trappings, I realized anew what Christmas really means. I imagined waiting and watching from the other side of the veil and anticipating the night that the Savior would be born and knowing that this changes everything.

In the time that has passed between then and now, I’ve made much graver mistakes than pouring rabbit poop down a window well and felt much deeper despair than the guilt of telling my mother I didn’t do it.

If you ask me, the identifying quality of Scrooge’s character is not that he was bad-tempered, but that he was changed. With that in mind, calling someone a Scrooge should indicate that they are beautifully improved, transformed and on their way to being a new person in Christ.

If that’s true, I hope I’m a Scrooge.

Thanks for the nice article. Amen to your conclusions and to the comments above. I dont know if Charles Dickens was a Christian? Of if he just accidently told the story of us all, how we all fall short but can experience the joy of forgiveness and hope for the future. I've discovered that process often starts with a traumatic life experience. When John Newton wrote the inspired song, "Amazing Grace", the second verse says, "Twas grace that taught my heart to fear and grace my fear relieved." The fear that directed his eyes heavenward was a near drowning at sea. Whether its Scrooge or Alma the younger, or ourselves, often we have to experience a physical trauma that forces us to our knees, and then we are humbled enough that God can point out our dire spiritual situation, and then after begging forgiveness we feel the grace that relieves that pain. Those who have experienced that grace know the joy that both Alma and Scrooge felt. I'm sure Alma, and Scrooge and Newton, (and myself) all agree, twas indeed a blessing that I was driven to my knees, and a greater blessing that I was given hope for a bright future.

Thank you! Your perspective is right on. Scrooge is an analogy for all of us. Christmas - because of Christ - is the opportunity given by the calendar to remind us that we are free, because of the Atonement, to give up the bah humbugs and to be born anew and to become the generous and compassionate souls that God desires us to be. Thank you for sharing your thoughts on this!