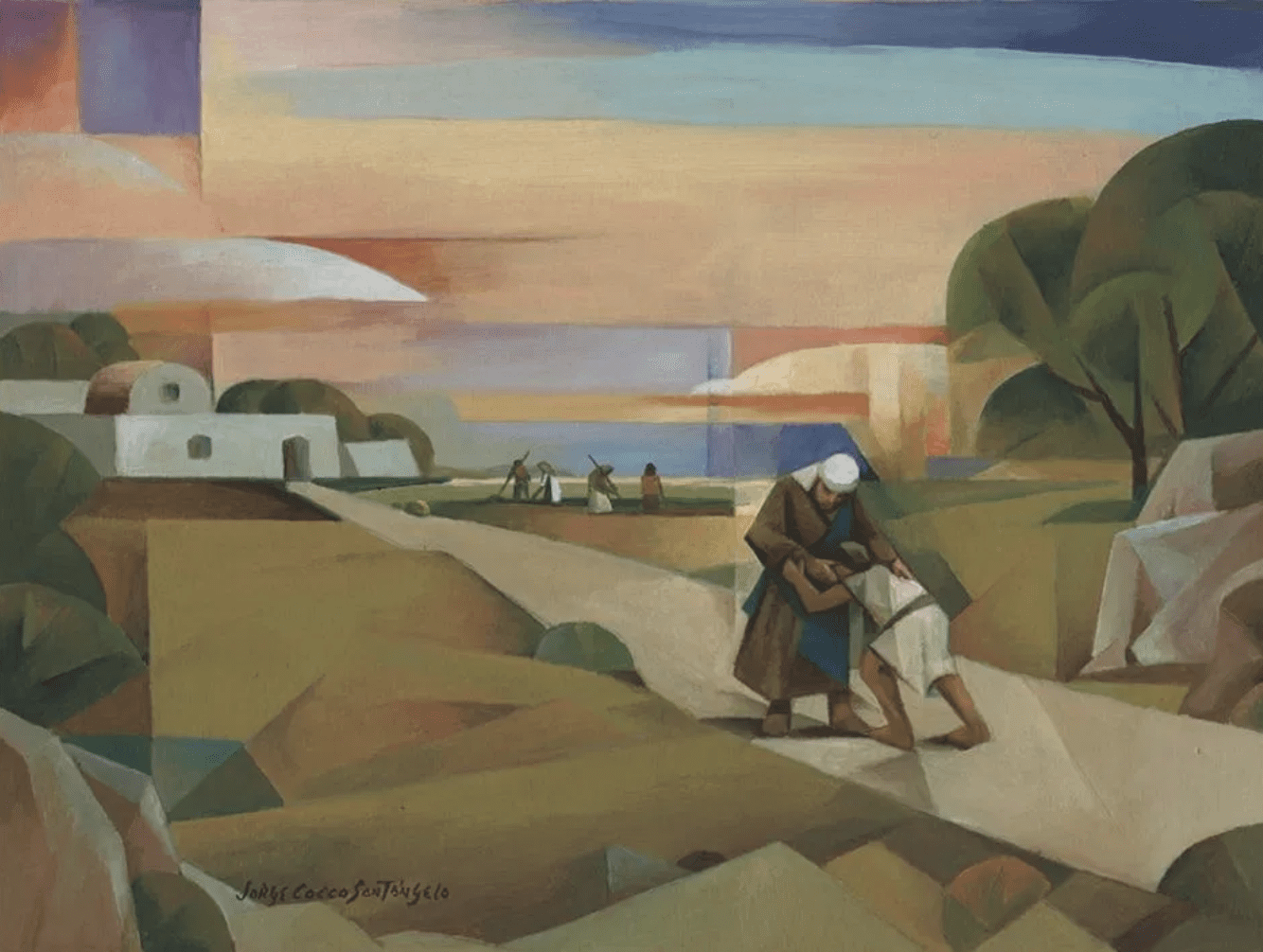 This is part two of three-part series. To read part one, CLICK HERE.

Here are highlights from the presentation by John W. (“Jack”) and Jeannie S. Welch at the FAIRMormon Conference in Provo on August 8, 2019

Jack: As mentioned in part 1 of this series, Jesus’s most complete single overview of the plan of salvation is found in the parable of the Good Samaritan, which stands as a microcosm of the plan of salvation. Understood symbolically, it represents our coming down from a premortal holy place, falling among evil forces, and being left exactly half-dead (having suffered one death but not yet the second death), but we are saved, washed, anointed, with wounds bound up, taken to a house of healing, awaiting the promised return of that Savior. The entire plan so memorably portrayed here with all its many details, from start to finish, makes this parable one of most read and quoted of all the parables. This painting’s title, Go and Do Likewise, encourages us also go and do as Jesus did.

Jeannie: Joseph Smith gave us another very useful interpretive key, saying: To understand a parable, ask yourself, “What question drew the parable out?” (TPJS 277). In the case of the Good Samaritan, there were actually two questions: People usually think of the second question, “And who is my neighbor?” But the first question asked by the lawyer was this: “What must I do to obtain eternal life?” or in other words, tell me the plan of salvation. Thus, in this drawing, Cocco has correctly placed Christ’s atonement in Gethsemane directly in the victim’s line of vision above and behind the life-saving works of the Samaritan.

Jack: Taking us back into the premortal councils is the little-used parable of the Willing and Unwilling Two Sons. Using Joseph’s key here opens the meaning of this parable of the certain man who had two sons. It was given by Jesus in response to the chief priests’ two questions: “By what authority are you doing these things, and who gave you that authority?” Jesus’s answer tells how the Father asked his two sons to go down and labor in the vineyard this day. The original Greek of this passage makes it clear that the first son did not say “I will not go” but “I will it not, it is not my will” and then  he reconciled himself to the will of the father, and he went forth with power and authority. The other son, of course, did not. Cocco’s depiction in The Father’s Two Sons focuses on the decisive moment when the Father extended his assuring and determined hand to his first son, while that Son, Jesus, places his hand submissively over his heart. Meanwhile the other son, Lucifer, is exiting into the margins.

Jeannie: With this understanding in place, we return to Matthew 13. That chapter gives a whole series of parables, and so it is often called Jesus’s Parable Sermon. It has been shown to be the chiastic center of Matthew’s Gospel. In seven parables, it offers an overview, or macrocosm, of the Plan, beginning with the Sower, then going to the Tares, and eventually ending with the parable of the Great Net of judgment.

The first parable in Matthew 13 has been called by many names: the parable of the Sower, of the Seeds, or of the Soils. In the plan of salvation, life-bearing spirits come down upon this earth. Such spirits are represented here by seeds. As was part of the Father’s plan, these seeds will find themselves in various circumstances, some of which will be conducive of growth, while others will hamper growth by adverse conditions as the word of God is presented to them. The existence of these differences is not an unexpected aberration, but an integral part of the plan.

While the parable of the Sower mentions the challenges of heat, weeds, and birds as mortal enemies of the seeds, Cocco’s final portrayal of The Sower optimistically minimizes the long lasting effect of those forces and instead looks forward as does the Plan to the Lord’s ultimate promise of an abundant, bounteous harvest, even 30-, 60-, and 100-fold.

Jack: The parable of the sower directly gives rise to the next question: why must there be opposition in this world? That question is answered by the next parable and painting, that of The Wheat and the Tares. Focusing not on the point that an enemy had sown the tares while men slept—as other artists have tended to do—Cocco shows the Lord directing his servant to let the two grow together for a season, for uprooting the tares will damage the wheat. This parable thus teaches about the anticipated great Apostasy, how there will be good wheat out there in the world amidst the tares, and how it will eventually be (according to Doctrine & Covenants 86) the lawful heirs of the priesthood who will be able to distinguish between what is living wheat ready for harvest, and what is empty tare.

Jeannie: Next, in Matthew 13, comes the parable of the mustard seed, which teaches many things about the principle of growth and progression. As this painting, Like a Mustard Seed, sequentially illustrates in three stages, from left to right, a tiny seed, carefully planted and tended, will grow into a large mustard plant, which will become a home to purified birds of the heavens. Joseph Smith saw in this parable the antidote to the Apostasy, with the Book of Mormon being that seed that will come up out of the ground to give rise to The Church of Jesus Christ of Latter-day Saints that will safely harbor the birds that choose to build their holy nests [literally in the Greek, “to tabernacle”] in its branches. Cocco creatively illustrates this by showing the birds’ sanctification in their “tabernacle” nests.

Jack: And so it is that the plan requires each individual to choose. Meaningful individual choice, coupled with consequences and accountability, is the enabling power that makes life in this mortal existence eternally valuable. Thus, as the parables continue, there will be two ways, two gates, two foundations, for “there needs must be an opposition in all things” (2 Nephi 2:11), represented in the parable of the wide and the narrow two ways. Cocco’s geometric designs always make crux of the parable the commanding focal point of the composition. Here, the absolute center of this painting is this parting of the two ways, and, as you see, our traveler’s head is positioned precisely at that critical point of departure.

The plan of salvation next makes it clear that consequences and accountability will follow our wise or short-sighted choices. Cocco studiously infuses specific textual details into his images, as the artistic comments accompanying each painting in our book make clear. In this case, Cocco’s painting of The Rock and the Sand accentuates the strength of the templed-house built upon the perfectly flat and solid rock, while in counterpoint he emphasizes the force of the storm and the magnitude of the collapse of the house built on an unstable foundation.

Jeannie: The Shepherd parables vividly illustrate the concept that those who choose the covenant path can trust in the protection of the Lord, who presents himself as the Good Shepherd, who calls to his sheep, who cares for them, and who goes after those who go astray. In these parables, He emphasizes His role as one who protects, carries, and leads the sheep of his fold. Most of all He sincerely loves his sheep. The symbol of sheep is powerful for a reader who understands sheep are among earth’s most vulnerable animals and need a shepherd’s care and protection, and they also need one another. Their only security comes from being close to the Shepherd and also from being a member of a flock. And as was promised in the premortal council, our Shepherd Jesus Christ will eventually give his life to enable all to remain in his fold and to rescue all who will heed his call and follow Him.

The Shepherd parables also dramatically portray for us the unimaginably great joy that takes place in heaven when each one who is lost is brought back to the fold, like a lost coin that is found. That joy is shared among family and friends, for the song of redeeming love, according to Joseph’s view, is not a solo. Heaven is other people. Heaven is blessed with a celestial sociality that is the essence of eternal life with Christ and our vast heavenly family.

Jack: But unlike the lost sheep and the lost coin who do nothing to become found, humans who have wandered off must come to their senses, repent, and return of their own free will, while the Father watches for their return home and celebrates their homecoming. Cocco’s portrayal of The Prodigal Son beautifully captures the essence of the many steps in this process of recognition, remorse, rethinking, picking up, returning, confessing, receiving forgiveness, celebrating, and starting over, all taught by the parable of the Prodigal Son.

But once we have been forgiven much, the plan requires that we too, in turn, must forgive, consecrate, and endure to the end. The Lord’s prayer pleads, “Forgive us our transgressions or trespasses as—that is, to the same extent that—we have forgiven others who trespass against us,” and here we have next the parable of the unforgiving servant who was forgiven a huge obligation, but goes right out and turns around and refuses to forgive one who owed him a significant but comparatively small amount. In portraying The Unforgiving Debtor, Cocco deftly reverses the image of the man forgiven who then, in turn, goes out and refuses to forgive, giving us an unforgettable image of the terrible offense to God we must strive to avoid.

I am impressed with the beauty of the paintings and the profound understanding of the parables.

Is Loving Condoning? Responding to our LGBTQ Brothers and Sisters