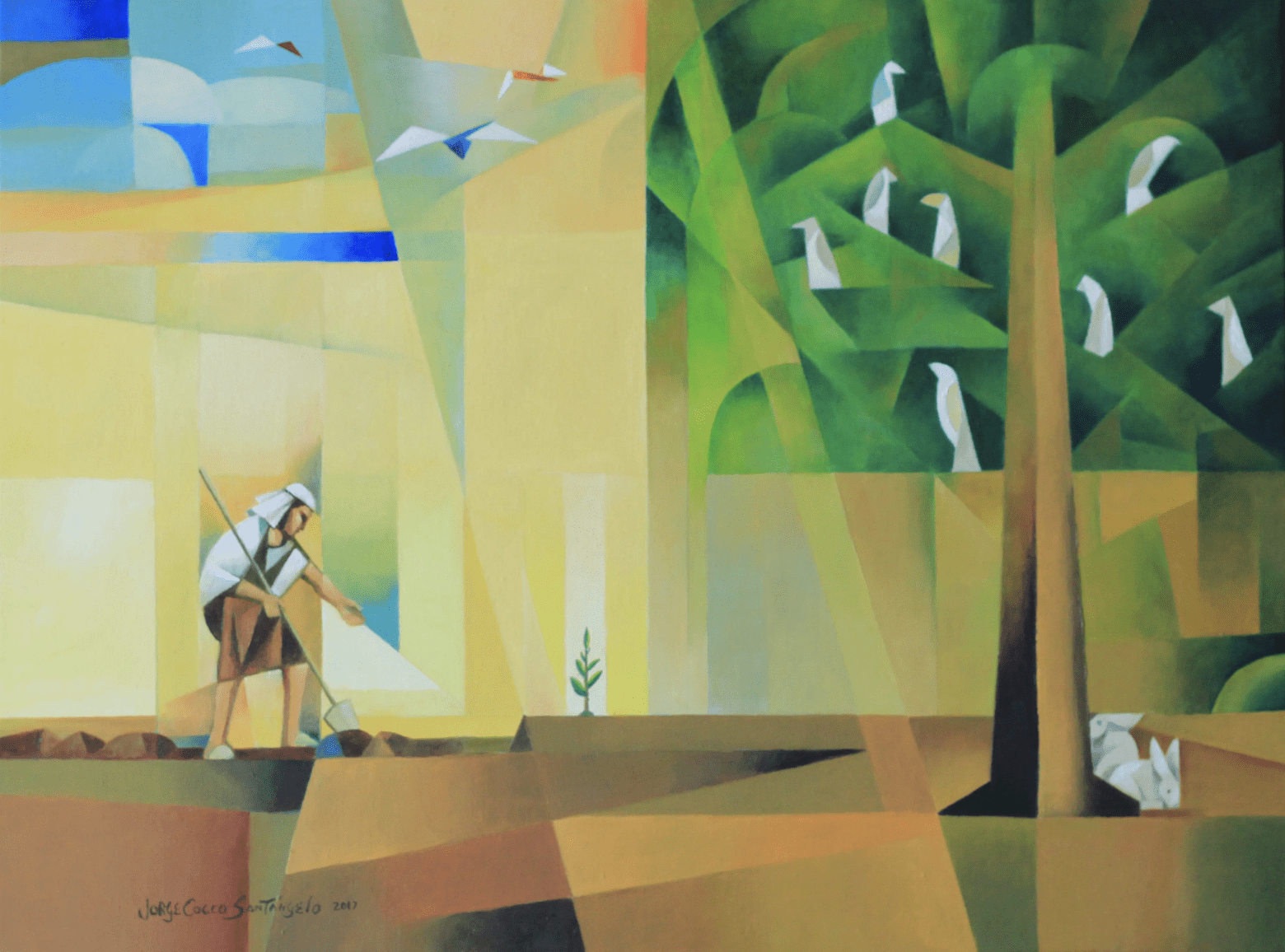 In three parts, here are highlights from the presentation by John W. (“Jack”) and Jeannie S. Welch at the FAIRMormon Conference in Provo on August 8, 2019

Cover image: “Like a Grain of Mustard” by Jorge Cocco.

Jack: Today, we wish to share with you our deep, enthusiastic, and tender testimonies of the truth and goodness of the parables of Jesus. We have recently published a book that sees the parables of Jesus in the light of the plan of salvation revealed by the Restoration of the Gospel of Jesus Christ especially in the Book of Mormon. This art-and-scripture-study book has been a joy for us to produce as a couple. It includes a series of 28 paintings that we commissioned by the newly recognized and extraordinarily talented LDS artist, Jorge Cocco, along with art commentary by Herman du Toit about Cocco’s ingenious “sacro-cubist” composition of each of these paintings.

Jeannie and I have been fascinated for many years by the texts and artistic renditions of the parables of Jesus. The Good Samaritan, especially, has been beautifully and meaningfully portrayed by artists over the centuries, in early illuminated Greek New Testament manuscripts, in the stained glass windows of the French cathedrals at Chartres, Bourges, and Sens, and on the back of the icon screen at the Greek Orthodox chapel at St. Catherine’s monastery in the Sinai, and on the ceiling of the eastern Orthodox church in Tarnovo, Bulgaria.

A Detailed Allegory of the Plan of Salvation

Particularly interesting to us was the way the Good Samaritan was almost universally understood in early Christianity, as a detailed allegory of the plan of salvation. Quite amazingly, here is how Origen, in the second century A.D., understood this classic parable: “The man who was going down was Adam. Jerusalem is paradise, and Jericho is the world. The priest is the Law, the Levite is the prophets, and the Samaritan is Christ. The wounds are disobedience, the beast is the Lord’s body, the pandocheion (that is, the waystation), which accepts all [pan-] who wish to enter, is the Church.

And further, the two coins [denarii] mean the Father and the Son. The manager of the stable is the head of the Church, to whom its care has been entrusted. And the fact that the Samaritan promises he will return represents the Savior’s second coming.” For a full discussion of this allegorical interpretation, see John W. Welch, “The Good Samaritan: A Type and Shadow of the Plan of Salvation,” BYU Studies (1999) and “The Good Samaritan: Forgotten Symbols,” Ensign (2007),

This interesting interpretation of the Good Samaritan led us to wonder: how many other parables, either alone or as a group, might relate to what we call the plan of salvation? We also wondered why more of the parables had not been portrayed artistically, and what might be done about that. Enter Jorge Cocco.

Jeannie: Jack and I first connected with Cocco when Cocco spoke to the BYU Studies Academy in 2016, just three years ago. His presentation there, along with an exhibit of his paintings of the life of Christ in the Church Museum of History and Art, led to Herman du Toit’s essay about Cocco’s life and work in BYU Studies Quarterly, 55 no. 2. All of this helped catapult this obscure 80-year-old Argentinian LDS artist into immediate popularity in the Church. More about him and his style can be found in chapter 1 of our book and also on Cocco’s own web site, https://jorgecocco.com

We were both drawn immediately to his paintings and could see possibilities for working together. He responded enthusiastically, and our collaboration was invigorating and inspiring. In particular, we discussed our vision of organizing the parables according to their roles in the plan of salvation, and Cocco’s genius went to work on how to portray each of the parables with this understanding especially in mind.

We found that knowing the plan of salvation was like seeing the picture on the box, as we try to put all of these parable-pieces together as one great, coherent, whole. As Latter-day Saints interpreters, we all have a distinct advantage in the insightful foundation that the plan of salvation give us. This helps us believe and follow the teachings of Jesus more meaningfully and more completely, and we hope the same will be true for our readers.

Jack: Each chapter in the book covers several points:

Jack: The point of departure for this book and of the painting on the cover, The Lord of the Parables, is the question that the twelve apostles asked Jesus on one occasion, namely, Why do you speak in parables? As you’ll recall, Jesus answered, in essence: many people will generally understand some of what I’m saying, but a few other people will see much more, as can you, because “to you,” he said, “is given the mystery of the kingdom of God” (Mark 4:11), or, as Matthew 13:11 reads, “to you is given to know the mysteries of the kingdom of heaven.” We learn from Jesus’s answer that the disciples knew something that acted as a key to their understanding of Jesus’s parables.

The Apostle Paul makes it clear in 1 Corinthians 2, as Michael Rhodes has recently very helpfully explained, that the “mystery” is what we would call the plan of salvation that God foreordained from the foundation of the world, “before the world was.”

Jeannie: Because the overriding principle in the plan of salvation is faith in the Lord Jesus Christ, it is easy to observe that Jesus often painted himself into his parables. He can readily be seen as the Samaritan, as the sower, as the gardener planting the mustard seed, the foundational rock, as the Good Shepherd, as the forgiving Lord, and most obviously as the son of the Lord of the Vineyard who is killed by the wicked tenants, as well as the returning Bridegroom in the parable of the Ten Virgins. In other parables, the symbolism is less obvious, but if you read seeking and asking, “Where is Jesus in this parable,” you will find him.

Indeed, the greatest assurance that was given to all of us in the premortal council was that all will eventually have the opportunity to find Jesus and to recognize Him as our Savior, and that everyone—even a marginalized Samaritan woman—can receive His gospel and obtain its eternal living water. In his gorgeous painting, Jesus and the Samaritan Woman, Cocco captures many wonderful details in this encounter, when the woman at the well recognizes Jesus as He presented himself to her in a symbolic way, as the one who has come into this world to give us the living water of eternal life.

In this painting, Cocco powerfully depicts the action of the Savior reaching out to the woman, breaking through the boundary between His celestial world and her mortal world to invite her to listen to His message. Think of the many ways in which this encounter is the exact opposite of the conversation of Jesus with Nicodemus which had just taken place, perhaps the night before.

He embodied all that was position, privilege and knowledge in his society. He came by night, seeking to know the source of Jesus power and ability to perform miracles. When Jesus spoke to him in abstract, symbolic terms of water and spirit, he drew back immediately, almost insolently, as he refused to accept the symbolism, asking “Can a man be born again, can he enter the second time into his mother’s womb?” As far as we know, Nicodemus never spoke with the Savior again.

But the result of Christ’s conversation with the Samaritan woman is quite different. In this painting, Cocco arrays the woman in royal purple, showing her true nobility of spirit as one who was so eager and ready to receive that was ready to believe that he could actually give her “living water” even though he had nothing with which to draw water from the well and that “never thirsting again” seemed equally quite impossible. As she questioned, listened, understood and accepted His symbolic imagery, she asked for more, and she, a lowly Samaritan woman, became the first person to hear his announcement, “I that speak to thee, am He,” the Messiah.