How Donny Osmond Takes His Father Wherever He Goes | Meridian Magazine 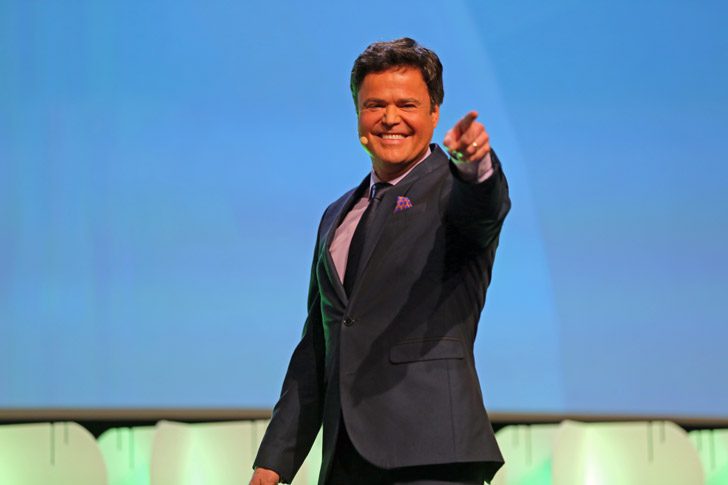 How Donny Osmond Takes His Father Wherever He Goes

This week on Meridian we will bring you the key events from the RootsTech 2015 conference, held Feb. 11-14, the largest family history gathering in the world. It was sponsored by FamilySearch.

Donny Osmond’s entire life has been documented and recorded from that first moment when as a five-year-old he sat on Andy Williams lap and sang, “Yes Sir, That’s My Baby” before a national television audience.

He has the recording of “One Bad Apple” and the story behind sitting with his brothers one Sunday morning surrounding a radio listening to Casey Kasem’s Countdown. The week before the Osmond’s song had made it to number three on the charts and they wanted to find out where it was headed next—up or down?

“My Dad walked in the room and said in a stern voice, “Shut it off. We’re going to church.” The boys complained because they didn’t want to miss the announcement, but their Dad insisted, “It’s Sunday morning and we’re off to church.”

During church the Osmond brothers could hardly think, wondering what was happening with the count down and they bee-lined it home to turn on the radio, dying with suspense. They made it in time. Kasem played the number three song and “it wasn’t us,” Donny said. Same with number two. “We must have fallen from three during Church,” they moaned. Then the announcement from the radio sent excitement shooting through the house. “One Bad Apple” was number one. A moment to remember forever.

Donny said his whole life is recorded and said “Here’s the question. Has yours?”

Though Donny is known as singer, actor, dancer, television host and more, the best-kept secret is that he is also a family history buff.

“I became very serious about this back in the 90’s when my Mom passed away and I was given the responsibility of protecting her 40 years of family history research and adding to it in a very serious way. “

This coincided with his beginning to play Joseph in the Amazing Technicolor Dreamcoat, a role he played for six years and almost 2,000 performances.

Donny said, “The downside of doing the show is that I traveled a lot. The upside was that while I was on the road in my hotel room or apartment I would work on genealogy.

“At first, the terms genealogy and family history were intimidating words. It sounded like really complicated, daunting and boring endeavors to jump into all of that. But once I began and I got focused it was like building a huge jigsaw puzzle.”

He said, “The more you do the more pieces you put together and the more fun it becomes. FamilySearch.org has made it so easy and fun as opposed to the PAF days.

“Trust me when I say family history and genealogy is contagious. One day I was in the kitchen and my 17-year-old son was on the computer and I asked, ‘What are you doing son?’ He answered, ‘Dad, I’m indexing.’ I love it.”

Leaning on Your Genes

In the tough world of show business, many are lucky if they have five-year careers. He has had a fifty-year career which means he has had to be determined and tenacious enough to invent and re-invent himself, to hang in there when he reached apparent dead-ends.

Michael Jackson told Donny when he was 21 years-old that as a teen idol, he was now all washed up and he’d better take a different name if he wanted to stay in show business.

Instead, again and again Donny has reached back into his roots to find the strength to carry on. He said, “With further study we find our attitudes, our character traits are passed from generation to generation, not only through oral and written traditions that creates expectations, but through our DNA. Science is validating that we really are products of our past.”

At the Emory School of Medicine, scientists took laboratory mice and shocked them every time they sprayed a cherry blossom-like odor into the air. The scientists continued to do this until all they had to do was expose the mice to the cherry blossom odor without the shock and the mice began to shake and quiver.

What was surprising is that the children and grandchildren of these same mice had the same response to smell of cherry blossoms—though they had never been shocked. It is becoming more clear that we inherit not just the physical traits of those who have gone before us, but that their experiences are somehow passed down as well.

Because Donny learned that his ancestors were tough tenacious people, he had the confidence to make his way in show business even when it was really tough. He believed those traits were in him as a gift from his ancestors.

One of those times came with the offer to appear on “Dancing with the Stars” when he was 51 years old and would be competing against people much younger than he was—while simultaneously appearing in Las Vegas every night.

“That was one of the hardest, most taxing, emotionally and physically demanding things I’ve every done,” he said. “What got me through it? Two people.”

The first was his great, great grandmother Elizabeth Williams who he jokes he didn’t get his famous smile from. But he thinks he got something else even more important. “Elizabeth Williams did pass on to me a tenacity and a work ethic and a never-say-never attitude toward life and love.”

She matters to him. Born in Wales in 1832, married to Thomas Davis twenty years later, in her first three years of marriage she had three still born children. Converts to Mormonism, they dreamed of going to Zion and turned this burning desire into relentless hard work. They ended in Idaho in a two-room log house. Of her twelve children 5 died as children.

“Elizabeth never went to school. She couldn’t read. She couldn’t write. She kept going because she wanted her children to have an important opportunity for education that she didn’t have.” Donny carries Elizabeth with him in his soul, in his genes. Her experience has shaped his.

A second source of strength comes from a man that Donny first only referred to as Virl. He said, “Virl lost his father when he was six weeks old. He never knew his biological father. He had two different step dads and over a period of time they kicked him out of his house when he was just a young teenager.

“I think he was about 14. He slept on a porch and immediately tried to get a job at a local general store. There was no opening. But he asked the owner, ‘Can I at least borrow a broom every morning?’ He said ‘Sure’ and, every morning without pay, Virl would sweep the porch to keep it as clean as possible. He would greet the customers and make them feel welcome so they would come into the store

Eventually everybody just loved to come to the general store to shake Virl’s hand and start their day off right. He eventually got a job there. No, he didn’t have a lot of money. He didn’t have a famous name or reputation. No one even cared about him. He was simply in survival mode.

“He lived on bread and milk nearly every day. He would take ketchup and boil some water and call it tomato soup. In his teenage years, he joined the military and eventually found a little, young lady who he fell in love with .

“They got married. They wanted to start a family. Unfortunately , their first two children were born severely handicapped. They were born deaf. After much consultation the doctors recommended that they don’t have any more children. Something’s wrong.

“However, they were faithful. They had strong testimonies. They believed that God would help them through fasting and prayer and eventually they felt divinely inspired and called to bring more children into the world. So they had more children. They had nine to be exact. I was the seventh of those nine.”

Donny tears up when he concludes his story about Virl, who was his father. “We inherit personality, sacrifice, our creativity and sense of humor.”

We are linked inextricably to our ancestors as well as our children. Donny might tell Michael Jackson that thanks to all this good, old-fashioned tenacity that was passed to him in family story and in ancestral experience that somehow is embedded right in his being, he did not wash up in show business. Instead, he just produced his 60th album, The Soundtrack of My Life.

Go to the App store and download the free Donny app for a preview of the songs on this new album.

I love to read these inspiring stories. I am so thankful for the amazing traits we have gained from our ancestors, many who were immigrants and pioneers in the Western USA. As a convert to the church I feel that my family had much to give as their courage and work ethic helped communities grow. I also love having the opportunity to feel of their spirit now and look forward to seeing them again, hoping I have lived a life that is in accordance with their diligence in living good lives.

I am grateful and appreciative Donny Osmond shared his feelings about gleaning some of his strengths through family genealogy members through his research. Back in 1972 I obtained extra credit in biology choosing to create genetic records of my ancestors learning who and how many on both my parents side of their families had red, brunette, blond hair, the eye colors, height, skin complexion, etc. As documents were gathered I learned some of my ancestor's occupations they labored in, their talents, their faith, their sorrows and their joys, where they lived in as they aged.....it is so amazing! Sometimes I feel as though perhaps they are the one's making it possible for me to find their records so they are not forever forgotten! The more I learn of my ancestor's ways and means the more I feel a connection to them and draw strength from them. Marie Hawk