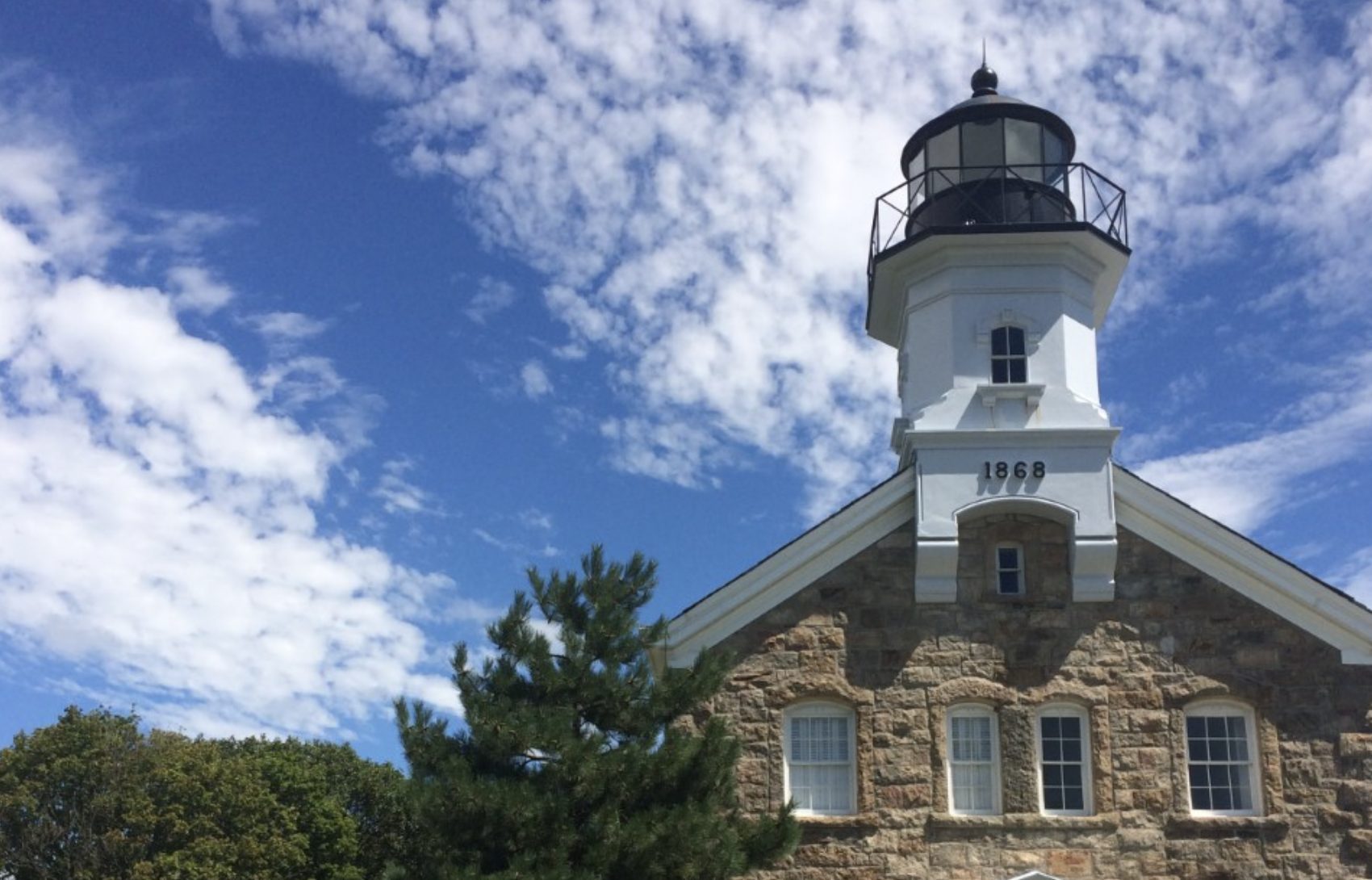 Cover image: Sheffield Island is connected at low-tide to Nauvoo Island (now Shea Island) in Long Island Sound. The island’s lighthouse would have been built after the Saints’ Fourth of July party in 1857.

It was July Fourth 1857 and Latter-day Saints living in New York City, Connecticut and as far away as Boston gathered for a grand “clam bake” on a small islet in the Long Island Sound that had dubbed “Nauvoo Island.”

The celebration, like so many others, would have faded into history had it not been for invitations extended to two journalists — one from the New York Times and the other New York Herald —   to join the festivities. Digitization of the newspapers has brought the accounts back to life. The newspapers published celebration accounts on page two of the Times and page three of the New York Herald, taking up nearly two and a half broadsheet columns in each paper.

In 2016, I took a public boat tour to Sheffield Island, which lies near to “Nauvoo Island,” (now called Shea Island) and tried to imagine the events of that 1857 Fourth of July based on the newspaper accounts.

Among the New York Times’ stack of nine headlines it reads: “The Peaceful Celebration, The Fourth of July is Honored in the City and its Suburbs…. A Mormon Clambake.” The Herald’s headline read: “Mormon Celebration of the Fourth at Norwalk.”

The reporters accompanied church members to the celebration via rail from New York City and then by sloop, or small sailboat, from South Norwalk, Connecticut. The branch in Norwalk was anchored by the Bouton family who owned a large mill there. The nearby Nauvoo Island had been a gathering place for celebrations and baptisms for nearly two decades, according to an account of one family member. Legend holds that John Taylor named the spot “Nauvoo Island,” in memory of the city the Saints left in Illinois years earlier.

The Times reported. “The sail down the Bay was much enjoyed; the hymns sung by the choir were to most hilarious tunes; the clouds parted, and the joyous sun, a stranger to our skies for most previous days made land and water laugh under its beams. And in the best possible state of mind and appetite, the Saints and our Gentile reporter reached Nauvoo Island, the first eager thoughts of all centered on the clam-bake.”

Then came the feast of clams and a picnic. “Our reporter vows he never enjoyed a clam-bake so much before, but whether the cause was Mormonism or the circumstance that he had gone without breakfast, he is not prepared to say,” the Times reported.

There were patriotic and religious speeches as well songs by a choir and band. One was a handcart song set to the tune of Old Susannah. Charles R. Savage, who had recently arrived in New York and who would become a famous Utah frontier photographer, lead the band and choir. Here’s some excerpts of the Fourth of July celebration:

The reporter wrote that President W.H. Miles read the Declaration of Independence. Judge William Appleby, a local church leader and editor of The Mormon newspaper in New York City, delivered a patriotic and doctrinal address based on patriotic themes and The Book of Mormon.

“We believe, he said, America to be the land of freedom, set apart by God himself as an asylum for the oppressed of all lands, and that it is His will that never through the lapse of all coming ages shall any king or emperor rule over us.”

There’s no explanation about how the Saints ended up inviting the journalists to their soiree, but one can guess it was to help temper the negative coverage of the Saints in leading newspapers of the day. The coverage had helped fuel growing opposition in Washington to the church and activities in Utah. In particular, the clam-bake may have been a way for church leaders to show that Latter-day Saints were patriotic Americans in contrast to the common reporting about dissent in Utah against the Union.

At the end of the dinner, toasting with lemonade, the Saints raised glasses to the Constitution of the United States,  George Washington, President of the United States, “the nation we live in,” “The Saints of the Latter Days,” freedom, the ladies, and the “virtue of Utah.” There was also a special toast to the press “and its representatives who are present. They have our kindest feelings,” the Herald reported.

Ironically, this coverage of Latter-day Saints on July 4, 1857 was one of the few times that the press portrayed them as regular and patriotic Americans. Kind feelings about the press were not common for Saints of the time.  Most of the press coverage of the era was filled with unsourced rumor and falsehoods as well as exaggerated facts and stereotypes. As for first-term President James Buchanan, who was graciously toasted, it would only be days before Buchanan made the final order to send federal troops to Utah to quell the “Utah rebellion” and earned the title “Buchanan’s Blunder.”

Joel Campbell is an associate professor of journalism at BYU. He researches. writes and teaches about media and religion. He does not speak for BYU or any other organization.