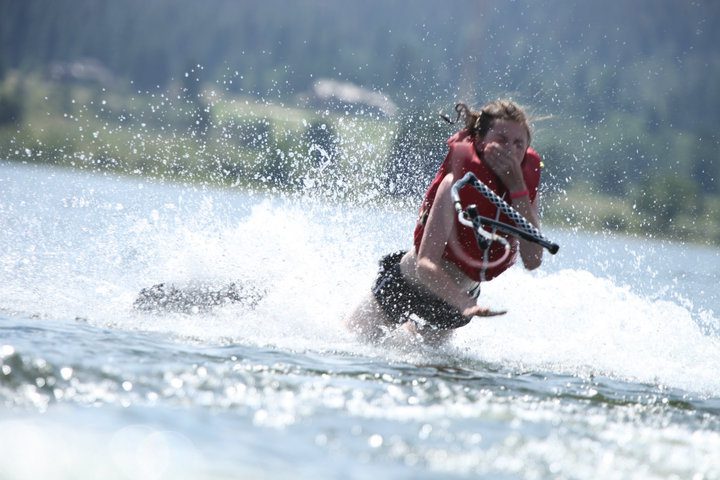 My uncle had a cabin in Idaho we loved to go to as a family growing up. His property was thick with pine trees and led onto the edge of a beautiful lake where we would take a boat out to wakeboard, waterski and tube. I especially loved how glass-like the water became every morning when everything was still and I could enjoy reading a book in the chill mountain air.

When I was 15, I decided to invite a friend and his brother up to the cabin with us. They had mentioned they loved wakeboarding, and I thought having two handsome guys at the cabin with us wouldn’t be too bad either. In fact, in my classic teenage-girl fashion I was pretty giggly that they had agreed to come.

We were out in the boat taking turns wakeboarding on the smooth water and having a great time. I realized as they both got out on the water that they not only liked wakeboarding but they were pretty good at it. While I swooned, I also became nervous to have my turn. Though I had waterskied quite a bit, this was my first time strapping my feet into a wakeboard.

I sat on the ledge of the boat buckling one buckle at a time and feeling my heart race. As soon as I slipped into the cold water, my balance was already thrown off. I didn’t quite know how to sit in the water to prepare for the boat to pull me up, so when they finally hit the gas and the boat began dragging me forward, it dragged me right into a belly flop, complete with water up the nose.

Two more times I tried to get up on the wakeboard to no avail. I peered through my dripping eyelashes to see these two cute boys looking at me from the boat, and I decided to give up. I didn’t want to look stupid or feel ashamed of my lack of ability anymore. I yelled out that I was tired and needed a break and spent the rest of the afternoon huddled in a towel on the boat.

The thought that they would judge me for not being a pro at wakeboarding after my first few tries not only prevented me from actually giving a valiant effort and patiently learning a new skill but also kept me from being my true self and developing a genuine relationship with them. I felt a sense of shame in allowing them to see my learning process and my failures, so I hid my vulnerabilities with excuses.

At one point while I was in college, I looked back on that experience and realized that by deciding to avoid looking stupid rather than owning my process, I had unknowingly missed an opportunity to become better at something new while simultaneously offering only the guarded outer shell of who I actually am. It is only through allowing yourself to show the messiest parts of your soul to someone that you can deeply understand and connect with them and grow to become who you want to be.

During the period of time I was contemplating the need to let go of shame and embrace vulnerability, a guy from work asked me on a date. Throughout the week leading up to the date, he sent me clues as to what we were doing but never told me directly. When he finally came to pick me up for the date, I still had no idea what we were doing.

It was already dark as we drove up the canyon road, and when we parked the car, he opened the trunk to show me two mini Segways we were going to take up the canyon trail (with headlamps of course). I gave him props for creativity, but in my heart, I was a little frightened to get on the Segway because I had never ridden one before, let alone in the dark on a canyon trail.

At first, I was slow, but as I got the hang of it, we got to a steady pace, making our way up the trail with bright stars above us. We talked and laughed together, and I could already tell by my still girlish giggles that I definitely had a crush on him. He was genuine and goodhearted and obviously cared deeply about other people and the Lord.

When we finally turned around, I went with trepidation back down the hill. It must have been because I was feeling vulnerable or the threat of an accident about to happen, but as I leaned back on the Segway trying not to go too fast, I began talking to him about my recent thoughts on shame and how that prevents people from being their true selves or making real connections.

Mid-shame-philosophy-sentence, my wheel came a little too close to his and the impact sent me flying through the air, landing on my arm and causing a cartoonish face-skid across the pavement. After the shock wore off, my first thought was not whether my body was ok but whether my ego was ok. But lying there on the pavement, with the talk of “shame preventing people from making connections” still echoing in my ears, I made the deliberate decision that I would not be ashamed, face plant and all. I would let this boy who barely knew me help me and exercise compassion and maybe laugh a little with me at how unexpectedly fast I went from vertical to horizontal.

When I finally mustered the gumption in my dizziness to turn myself over, I didn’t have the strength in my arms to push myself off the ground and get up. By that point, he was standing over me, shocked and asking if I was ok, and I looked up at him with a rug burned face and bloody knees and hands and said honestly that I needed help. He scooped me up off the road in his arms and brought me to the shoulder and together we sat for 10 minutes as I recovered. We talked about our families and stared up at the stars, and in that moment of potential humiliation for me we instead connected.

I got back on the Segway after a while, and we went the rest of the way down the canyon trail to continue our date as normal. He took me out for hot chocolate, but as I tried to pick up the cup, my arm was still in pain so much so that I couldn’t lift it off the table. I excused myself to go to the bathroom and realized when I also could not turn the faucet on for lack of strength that my arm was broken.

This was another moment of decision. Do I play it off, act like I’m fine, hide my feelings, and save myself the humiliation of asking for help (and frankly humiliating him that the date he carefully planned went terribly wrong)? I looked myself in the mirror with a gimpy arm at my side and made another decision. I would not be ashamed.

So, though I was nervous that I was overreacting and my arm was not, in fact, going to be broken, I came out of the bathroom and said, “Um, I think my arm might be broken.” After some debate, we went to the Instacare, and indeed, I had fractured my upper forearm. We laughed and winced our way through x-rays and splinting, and by the time he brought me home, stocked my cupboards with my favorite treats, and had done all my dishes, I was smitten, even with the pain pulsing in my elbow and inability to do most normal tasks (who knew putting in contacts or locking a door took two strong arms?).

That split-second decision to be open and willing to accept help and share my pain ended up being a life-changing one because that stranger who scooped me up off the road became my husband less than a year later.

Learning, asking for help, and leaving yourself open to the possibility that others will recognize your faults and weaknesses is extremely vulnerable, so much so that we often times avoid it completely. Wakeboarding and first dates are simple examples, but those moments taught me the profound lesson that whether we are attempting to develop a relationship with friends or family or Jesus Christ (especially in our relationship with Him), it will require an open and willing heart—a vulnerable heart.

It’s vulnerable to believe in someone you cannot see, let alone to trust Him with your deepest worries, mistakes, and heartaches. When we are in moments of doubt or fear, sometimes it’s easier to ruminate inside ourselves and endlessly discuss our problems with people around us rather than place our trembling trust in the loving arms of a Savior whom we hear always comes through on His promises but is still sometimes hard for us to trust.

Only when we really “offer [our] whole souls as an offering unto him” (Omni 1:26), allow Him to help us, watch us fail, pick us up, and guide us, can we give up some of our self-defeating and relationship-defeating tendencies.

Vulnerability, like faith, isn’t a feeling—it’s a choice. Even after choosing vulnerability on that chilly night when I broke my arm, I still have to choose every day to be open with others (including my husband) and share the parts of me that are harder to love instead of proverbially hiding under my towel. But it’s in those moments when I do share that I feel closest to others. Jesus Christ, the perfect confidant, is always ready to let us in and bless us, if only we allow Him to scoop us up from our fallen state, help us heal, and enable us to become who He wants us to be.

A great description of a process and its consequences. Many parallels with other actions such as willing to change, willing to try something new, willing to love an enemy, and willing to speak out for the truth. All are steps of vulnerability which, if pursued with faith and with confidence, can move us ahead much further than we were.

Excellent article. I've been assigned a Sacrament meeting talk on the 30th about how to accept and move past failure. This story is perfect. Thank you. and say Hi to your Dad for me.