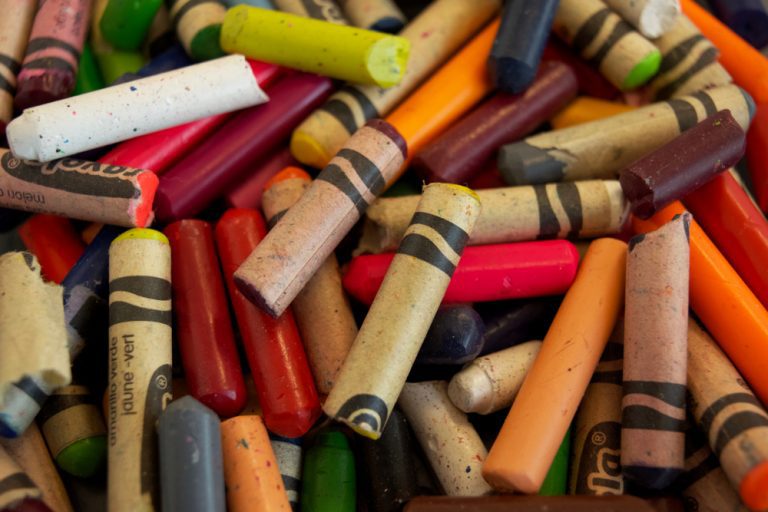 How a Broken Crayon Taught Kids the Value of Money

When people learn that I have 10 children, which is pretty unusual here in Atlanta, they tend to assume that I would naturally have much-needed answers to parenting challenges.  The truth is, when I only had one child, I had all the answers.  At least I thought I did.  Now that I have ten kids, each one with their own unique personalities, I usually answer any request for counsel with a simple denial, “I have no idea!”  Any parent with more than one child realizes that what worked for one child like magic will likely backfire on a second or third child.  Yet, here I am, ready to give some parenting counsel . . .

It all started with the stark realization of a failure.  One day at Rising Star Outreach in India, I was in my office when a volunteer walked in the door.  She looked exasperated.  This volunteer was a fabulous artist and had come to India to teach art in our school.  The children adored her and we were thrilled to have her working with us.  So, to have her look exasperated was not a good thing!

I asked her how her day was going.  She replied with great frustration, “You are ruining these kids!”  Believe me, she had my instant attention! She went on to tell me that she had been teaching the kindergartners that morning.  She said one of the boys looked her right in the eye and then with an impish grin snapped his crayon in half.  “Why did you do that?” she asked.  His reply stopped her in her tracks, “Oh don’t worry, the Americans will bring us more.” She looked at me and said sternly, “You need to fix this!  You are ruining these kids!”

The sad truth is that the kindergartner was right.  At that time, we routinely had 20 volunteers on campus working with the kids.  When the volunteers arrived, they typically had their suitcases full of treats and surprises for the children.  So yeah, the Americans would definitely give the children boxes of crayons among other things.

The good news is that at that point we had Richard and Linda Eyre, the famous parenting experts, visiting our campus.  Their son, Tal, and his wife, Anita, were also volunteering with us.  I found the Eyres in the yard, explained the problem to them and asked if they could help us “fix it”.  They promised to get back to me.

A few days later, Tal & Anita presented us with a plan.  For simplicity I’ll call it the Star Store Solution.  They suggested that we create a system where every child could be awarded up to five stars a day for their good behavior. Earning a star would include such things as showing up at school on time with all their chores done.  Another star could be gained by having all their completed homework for the day.  A star could be gained by helping another child.  A star could be earned by excellent performance in the classroom.  There were actually a number of ways to earn a star.

But stars could also be lost.  They could be lost for unkindness to another child, disrupting the classroom, destroying school property, wasting food in the cafeteria, etc.

Tal & Anita tasked another volunteer, Holly Pope, to create a fabulous Star Store that would motivate the kids.  We designated a room for the store.  She and her parents painted a beautiful painting on the floor of children around the world uniting to form friendship.

Then she went to work finding things that would entice the children.  She bought simple things like candy.  A child could buy one piece of candy in exchange for one star.  There were things like nail polish (a big hit-even at the exorbitant cost of 5 stars), bangles, crayons, markers.  There were some big-ticket items such as tickets to the movie theater, play clothes, dinner with the principal and his wife, soccer balls, backpacks, cricket bat, pocket video games, etc.

The students got to come to the Star Store once a week.  At first, they blew all their stars on things like candy, gum, trinkets, etc.  But they soon learned that if they saved their stars, they could earn something worth having, like a soccer ball.  Heaven forbid they should have to waste stars to replace something like crayons!

The new motto was “Nothing is to be given free!”  Now, when the volunteers showed up with their suitcases full of goodies for the kids, all the goodies were placed in the Star Store.

We had to bring all the teachers in and train them in the new system.  In spite of the extra work this would cause them, they were enthusiastic.  They loved the idea because the awards and/or punishments were immediate.  They felt that it empowered both the students and the teachers.

In India, in many schools there is unfortunately a lot of violence against the students, all done in the name of discipline.  We had outlawed any physical violence in our classes.  Then we noticed that the teachers were humiliating the offending students in front of the other students.  That was also outlawed.  The teachers were frustrated.  They had not had any training in how to control a child’s behavior through any other means than violence or humiliation.  They frequently expressed frustration to us that without the ability to hit or slap a student there was no way to control them.  So, they welcomed the idea of having acceptable control through the Star Store.

What followed was like magic!  No more broken crayons.  No more torn uniforms.  No more wasted food in the cafeteria.  No more behavior problems in the classrooms.  No more bullying.  But best of all, students started excelling in their schoolwork because they coveted getting an extra star.  They started helping each other out.  They were constantly looking for opportunities to show kindness and be awarded a star.

As time went on, we saw other admirable habits developing.  One day I saw a young student give away a coveted star to her friend who was crying because she had fallen and scraped her knee.  This was a whole new level!

The most beautiful experience I had with the store came one day when, in taking a shortcut through the Star Store I noticed that someone had bought a cake.  It was a staggering cost of 50 stars.  In India, cakes are often so sweet that most Americans have a hard time eating them.  So my first thought was, ‘we are going to have one very sick little student today!’

That evening when I cut through the Star Store again on my way to dinner, I noticed that the cake was gone.  When I got to the dining hall, I asked who had bought the cake.  A young boy proudly raised his hand. “Did you eat the whole cake yourself, or did you share it with others? “ I asked. His response stopped me cold.  “Oh no, Auntie.  I bought the cake for my leprosy colony.  No one in my colony has ever tasted cake before.”

I literally got tears in my eyes.

What a transformation!!  This child was no longer a beggar, hoping to get others to feel sorry for him and give him something.  He was now empowered to be the one giving to and lifting others.

In this age, it seems like I hear constant complaints from parents about how entitled their children feel.  The principles underlying the Star Store may help.  Consider giving them the opportunity and expectation to earn what they want. It may take them longer to get what they want, but they will grow stronger as a result.

This same principle even works with college expenses.  Some recent interesting studies have shown that students who have to pay at least a portion of their college expenses end up being more successful at school.  It makes perfect sense.  They have skin in the game, so to speak.  So let’s give our kids a leg up.  Let’s let them learn what it means to have skin in the game and set them up for success!