Hidden Things: Why Are We Told to “Consider the Lilies of the Field”? | Meridian Magazine 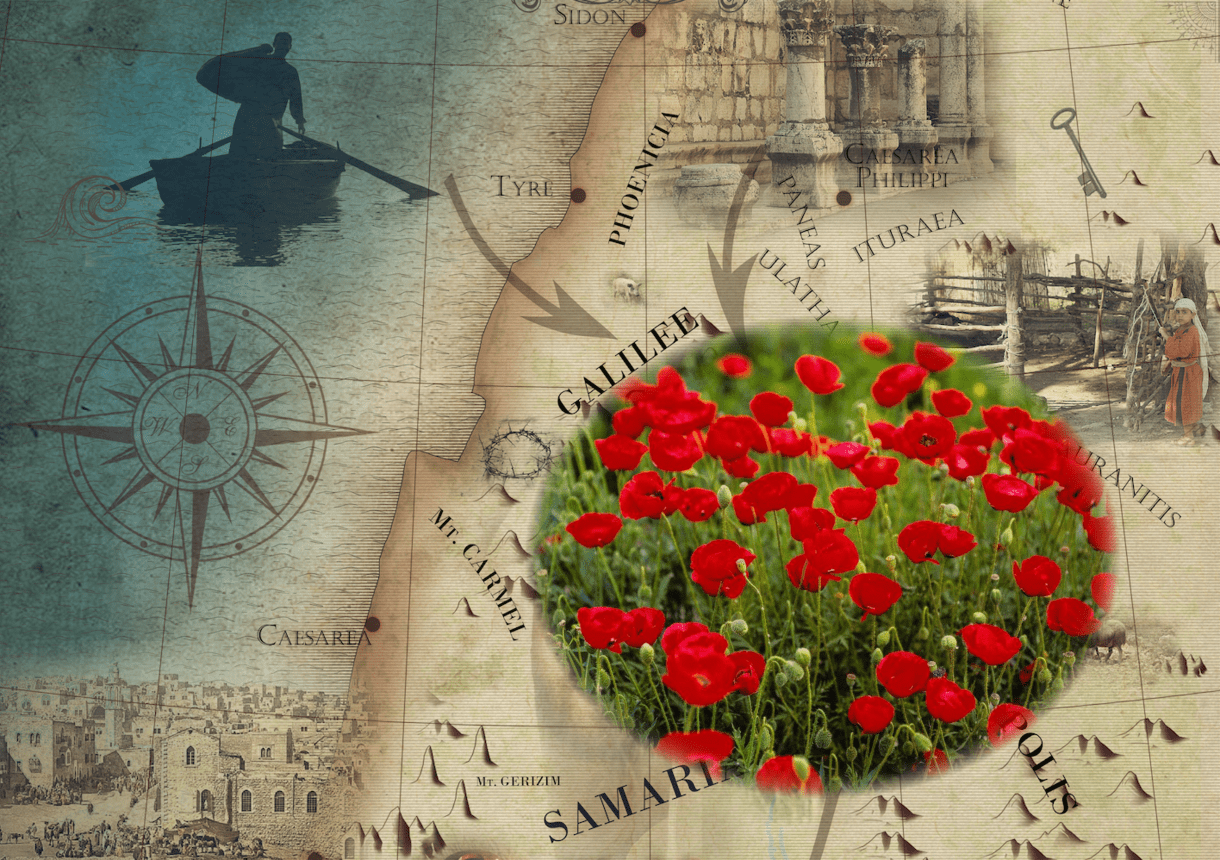 Hidden Things: Why Are We Told to “Consider the Lilies of the Field”?

The following is the second in a series of articles giving greater detail from the stories behind the hidden things in our recently released Treasures from the Life of Jesus jigsaw puzzle. If you haven’t gotten yours yet, BUY IT HERE.

When you find the “lilies of the field” in our Treasures from the Life of Jesus jigsaw puzzle you may be surprised at what they look like. Perhaps you, like me, have always listened to the beautiful song Consider the Lilies and visualized fields of dappled white. But our “lilies of the field” are deep red. Before I delve into the meaning of Christ’s mention of them during the Sermon on the Mount, I want to address the visual discrepancy you may feel.

Did tall, white lilies grow in the fields of northern Judea and on the shores of the Galilee during the life of Jesus? They don’t today, which is why many don’t believe that the “lilies of the field” alluded to in the gospels are referring to the white Madonna Lily—though at one time medieval Christian pilgrims came from far and wide seeking these flowers and picked them almost to extinction.[i] But these lilies grew in secluded valleys, not fields. And the Hebrew word shoshanah is translated as “lily” several times in the Hebrew scriptures, but could easily be referring to any number of wildflowers common to the fields of Israel.

So, the “lilies of the field” pictured are scarlet crowfoot, which are common in the fields of the Holy Land and bloom late enough into spring to be gathered as kindling with the dried grasses of the summer season, making them a good candidate for this biblical allusion.

What exact flower Jesus was referring to is not nearly as important as the lesson He was trying to teach so let’s look at the context of these words more carefully:

27 Which of you by taking thought can add one cubit unto his stature?
28 And why take ye thought for raiment? Consider the lilies of the field, how they grow; they toil not, neither do they spin:
29 And yet I say unto you, That even Solomon in all his glory was not arrayed like one of these.
30 Wherefore, if God so clothe the grass of the field, which to day is, and to morrow is cast into the oven, shall he not much more clothe you, O ye of little faith?
…
33 But seek ye first the kingdom of God, and his righteousness; and all these things shall be added unto you.

Oh, how we wish that just by taking thought, we could add to our stature. If only constant, frustrated musing about what we want and how we’re falling short actually made us better. I’d be practically perfect by now. We spend so much of our lives toiling and spinning and caught up in “the thick of thin things” and particularly worrying what the future will bring. That worry that permeates the lives and thoughts of so many, is the antithesis to living in faith and choosing to put our trust in God.

By contrast, “consider the lilies of the field”, Jesus advised His disciples, they don’t toil or spin and yet they grow in beauty and strength exactly as they should. As Scot and Maurine Proctor put it in their book Source of the Light, “They were not to be driven by fear, nervously trying to control all the elements of their lives. If, instead, they would make their focus the will of God, one day at a time, as surely as the flowers unfold, all things would work together for them.” When we try to control everything, not only are we fighting a battle that we cannot win, but we are indicating to the Lord that we don’t think He has the power or love for us to make our lives all they could be.

Sometimes I think I live in fear that if I surrender to Him fully, it will mean giving up on the deep desires for my life that He might not understand. Sometimes I struggle to trust that He cares about what I want or I falsely assume that He is trying to direct us all toward some conventional cookie cutter destiny and that cookie cutter will trim off the edges of myself that I believed to be most unique.

But “consider the lilies of the field”, they may not have the worldly glory of Solomon and yet they are anything but mundane.

As Vickey Pahnke Taylor put it in an article on Meridian, “The things of this world will never, in any way, equal the beauty that is God-given. Jesus instructed that we seek to clothe ourselves in holy garments, full of truth and light, rather than accumulate the corruptible possessions of earth.”

And something beautiful that C.S. Lewis pointed out in Mere Christianity about clothing ourselves in that increasing light is that—though we may fear that surrendering ourselves to the Lord will cost our individuality—in reality, increasing light in a room full of people that were previously in the dark would only serve to highlight and illuminate their differences.

And clothing ourselves in holy garments, and seeking first for the kingdom of God means understanding that the “glory” in our Heavenly Father’s kingdom means something very different than “glory” as we understand it here.

I remember once sitting with a small group of young single adults in the institute in Oxford, England. Most of those present were either students or faculty at Oxford University and we were discussing the book of Abraham, specifically those verses that talk about “the intelligences that were organized before the world was” and the “noble and great ones” among them.

It occurred to me as we discussed that it was interesting to be among a group of people who undoubtedly considered intelligence to be central to their identities and probably also sought greatness in their future. You just don’t apply to a university of that caliber unless you believe yourself to be someone of distinction and insight (and you cross your fingers that they’ll think so too and let you in). And yet, as we read about glory and intelligences, I realized that in the pre-mortal gathering being discussed, the One that stepped forward was not setting Himself above all, but agreeing to descend below it all.

As Elder Neal A. Maxwell put it, referring to the Savior’s profound, but simple statement, “Here am I, send me”: “It was one of those special moments when a few words are preferred to many. Never has one individual offered, in so few words, to do so much for so many, as did Jesus, when He meekly proffered Himself as ransom for all of us, billions upon billions of us!”

Jesus showed us an example of meekness, even from that earliest beginning. And as we look to Him as an exemplar, we become even more certain that meekness is not weakness.

The meek are filled with awe and wonder with regard to God and His purposes in the universe. At the same time, the meek are not awestruck by the many frustrations of life; they are more easily mobilized for eternal causes and less easily immobilized by the disappointments of the day.

Because they make fewer demands of life, the meek are less easily disappointed. They are less concerned with their entitlements than with their assignments.

“Consider the lilies of the field”, they don’t fret or worry about hoarding their share of soil or whether a nearby lily is getting more sun and yet they all continue to grow and thrive. Likewise, we can find our best growth when we give up the toiling and spinning. It’s easier said than done. Sometimes we think if we just hold on a little tighter or analyze a little harder, we’ll finally find the answer to controlling the things that are ultimately uncontrollable about our lives.

But the beautiful thing about becoming meek like Jesus and like the lilies is that by giving it all over to the Lord, you are forging the path that leads to His making weak things become strong unto you. By letting yourself stop depending so desperately on your own strength, you are actually allowing that strength to be increased in Him.

So, when you see the lilies of the field in the Treasure from the Life of Jesus jigsaw puzzle, remember not only that the Lord cares for the beauty of even insignificant things, but also that anxious and exasperated grappling for the things you think you want in life will bring you neither happiness, nor those very things for which you are so impatiently reaching. Instead, we must learn to turn toward the Lord in whose unfailing embrace, we will find our best growth and our truest joy.

Add this puzzle to your Easter celebrations.

The sources are hyperlinked in the article. Click through for the link. For example "As Elder Neal A. Maxwell put it" is clickable and it will take you to talk where the quote comes from.

Please site your sources for quotes!