Hidden Things: The Pioneers that Rounded the Horn of South America to Get to the Salt Lake Valley | Meridian Magazine 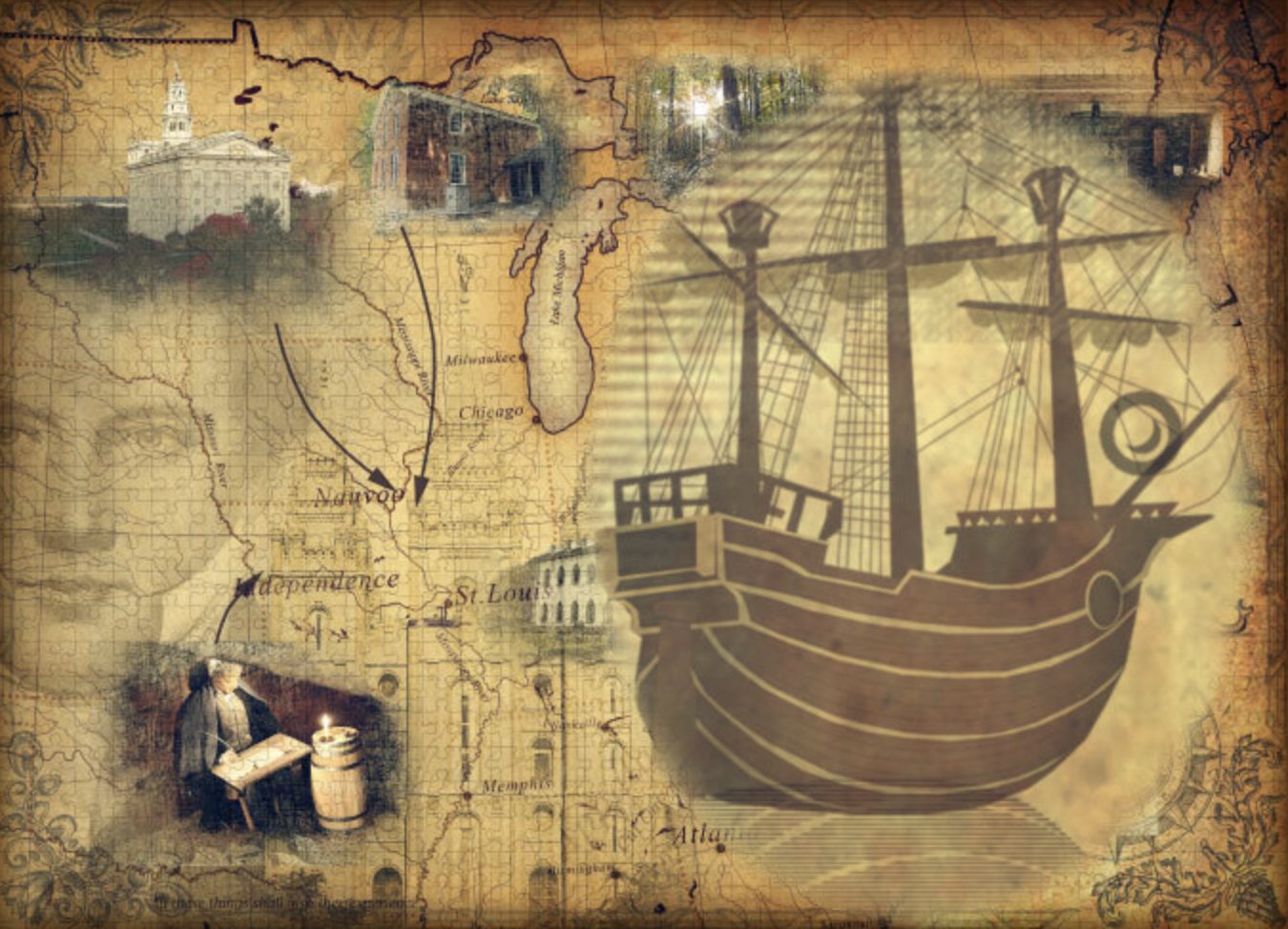 The following is the fifth in a series of articles giving greater detail from the stories behind the hidden things in our recently released Treasures of the Restoration jigsaw puzzle. If you haven’t gotten yours yet, BUY IT HERE.

If you have, bookmark or print this page so you can hang on to the story to share with your family as you come upon the Ship Brooklyn when you do the puzzle. The cover art for this article can help you know what it might look like. Read the fourth article in the series HERE.

The images of handcart pioneers and canvas covered wagons kicking up dust on the endless and ruthless plains of the West are familiar ones. In fact, perhaps the muddy hems, thinning oxen, and blistered feet of the long line of saints that left Nauvoo are the only pioneers you think of as you celebrate Pioneer Day or read of ancestral journeys to the “place that God, for us, prepared.” But there was another—lesser known–group of Latter-day Saint converts who made a pioneering journey in search of religious freedom and safety. And their struggles—though just as dire—were of a different nature entirely.

On February 4, 1846, the very same day the first saints left Nauvoo, a ship known as the Brooklyn set sail out of New York Harbor. It was a cargo ship that had been chartered to carry 70 men, 68 women, and 100 children—238 passengers total—on a voyage that would ultimately total 24,000 miles and take nearly six months. Leading them was Brother Samuel Brannan, former publisher of the Church’s east coast newspaper The Prophet, who was now appointed to head this company on an unusual journey to a place they did not yet know. They set off for California believing they would help find and establish whatever final safe haven the Church would choose for its persecuted members.

According to the California Pioneer Heritage Foundation, “This group of people was ready to colonize a new area, as evidenced by the things they brought with them. A third of the cargo was machinery and tools sufficient to serve 800 men (including plows, plow irons, shovels, hoes, scythes, sawmill irons, nails, and glass), a grit mill, a printing press (with two year supply of paper and ink), a 179 volume Harper’s library, seed for planting, dry good and merchandise for resale in stores to be established, textbooks for schools and livestock consisting of two milk cows, 40 pigs, and several crates of fowl.”

Each adult had paid $75 for their passage, with half that sum charged for each child.[i] Their berths were hard shelf-like structures mounted to the walls on four sides below decks with ceilings so low that only the children could stand fully upright. They also had a long table, stretching the entire length of the ship, that was used for schooling, dining, council meetings, and Sabbath services. Even with such cramped quarters, the company rule for those services was that “all that are able must attend, shaved, and washed clean, so as to appear in a manner becoming the solemn, and holy occasion.”[ii]

Only four days into the voyage, a storm besieged the ship. It was a gale so merciless that Captain Richardson said it was the worst he’d ever seen. For three nights, the women and children were lashed to their berths to keep from falling out of their beds as the ship was tossed over terrifying, mountainous waves.

August Joyce Crocheron, a passenger aboard the Brooklyn recorded the experience this way: “Furniture rolled back and forth endangered limb and life. The waves swept the deck and even reached the staterooms…Children’s voices were crying in the darkness, mother’s voices soothing or scolding, men’s voices rising above the others, all mingled with the distressing groans and cried of the sick for help, and, above all, the roaring of the wind and howling of the tempest made a scene and feeling indescribable.”[iii]

Finally, in desperation, the captain ventured below to tell the passengers to prepare to die. He found them praying and singing hymns to block out the sounds of the storm. While the crew was certain it was the end, these stalwart passengers believed it was only the beginning. Augusta wrote, “We were sent to California and we shall get there”. All survived the storm.

But not all would survive the rest of voyage.

The Brooklyn has been blown nearly to the Cape Verde islands off the northwest coast of Africa. But what seemed to be a delay worth despairing over was a hidden blessing as they were now in position to take advantage of the easterly trade winds.

Three in the company would die before the ship crossed the equator on March 3 and after crossing, the ship soon became caught in the doldrums of windless waters in “muggy, oppressive heat, motionless on a sea like molten glass”[iv] for about four days. The captain attempted to allow the cramped passengers to come up on deck for relief, but even that fresh air offered little. One passenger wrote, “We were so closely crowded that the heat of the Tropics was terrible, but ‘mid all our trials the object of our journey was never forgotten. The living faith was there and was often manifested.”[v]

Indeed, though seven more of their company would succumb to illness and be buried at sea before the ship reached the Horn of South America, many saw the hand of providence in their continuing journey. Two babies were born on the voyage; John Atlantic Burr and Georgiana Pacific Robbins, each named for the ocean over which they drew their first breath.

The dreaded Cape Horn–the tumultuous, churning waters where oceans meet—was skirted without incident. The Brooklyn ventured onward toward Valparaiso, Chile where its captain aimed to resupply. According to Joan S. Hamblin, “Their drinking water had become so thick and slimy it had to be strained between the teeth. Rats abounded in the vessel, and cockroaches and smaller vermin infested the provisions.”[vi]

But their destination eluded them as another storm came up and blew their ship nearly all the way back to the cape. The skillful captain redirected the vessel to the Juan Fernandez islands. A name you may recognize as it was later made famous as the setting for the stranded Robinson Crusoe. But stranded the Ship Brooklyn was not. The passengers were finally able to bathe, launder their clothing, gather fresh fruit and potatoes, catch and preserve fish, stock up on firewood and fill the ship’s casks with 18,000 gallons of fresh water.

In fact, one passenger saw divine direction in their needful detour to the islands. He said, ““If we had gone to Valparaiso, it would have cost us hundreds of dollars; thus showing to us the hand of the Lord and His overruling Providence and care for His people,”[vii] referring to their opportunity to find and gather provisions rather than have to purchase them.

After sailing onward and alighting briefly in the Sandwich Islands (now Hawaii), the pacific pilgrims made their way to the California coast. They landed there on July 31, 1846, five months and twenty-seven days after leaving New York Harbor. Brother Samuel Brannan, the company’s leader, had hoped to be the first to fly an American flag on California soil (a territory that was still a part of Mexico), but was disappointed to find that one was already flying on the customhouse.[viii] This group of seafaring saints believing they would be leaving the United States behind, but between the time they departed one coast and arrived at the other, United States forces had taken over the territory.

The Ship Brooklyn would finally dock at a small California town called Yerba Buena, a place that is known today as San Francisco. The population of the town at that time was 150, so the arrival of the saints more than doubled their numbers. In fact, for a time it became a “Mormon town”, with Church members dominating the demographics of the population and the seats in the city council. They would create the first English speaking school, the first bank, the first library and San Francisco’s first newspaper, The California Star.[ix]

It would be another year before Brigham Young would arrive at the mouth of Emigration Canyon on July 24, 1847 and would with Wilford Woodruff “[contemplate] that not many years that the House of GOD would stand upon the top of the mountains while the valleys would be converted into orchard, vineyard, gardens and fields by the inhabitants of Zion and the standard be unfurled for the nations to gather there to.”[x]

By then, many of the oceangoing pioneer saints had become quite settled on the coast and only about a third went on and joined the rest of the saints in the intermountain west. In fact, Brother Brannan met with Brigham Young in Wyoming about leading the main body of the saints the rest of the way to California and settling there permanently and was sorely disappointed when he was refused. So disappointed that, though he became one of California’s first millionaires and ushered in the Gold Rush of 1849 by walking the streets of San Francisco with a vial of gold, he lost his faith and eventually left the Church entirely.

But the voyage of the Ship Brooklyn was still a voyage of faith. It was the first colony ship carrying women and children to round the horn of South America. Its journey remains perhaps the longest known sea pilgrimage in history. Those onboard suffered a set of difficulties quite different from their counterparts on the overland trail west, but they too sought to see their tribulations through the eyes of faith. They sought to sing hymns in the midst of tempests and see good in unplanned stops on unknown shores.

We can learn from their example too.

So, when you spot the Ship Brooklyn as you piece together our Treasures of the Restoration jigsaw puzzle, remember that there is more than one kind of pioneer. And remember to pray even when you’re being tossed about because those storms might bring you right where you were meant to be.

One of my ancestors I most look forward to meeting on the other side is a 3rd great grandfather, Isaac Goodwin, who lost his wife during the storm when the ship was aiming for Valpariso. His wife was buried on Robinson Crusoe Island and he and his six children traveled on to California without her. Isaac had to "farm out" his children for months at a time while doing masonry work in 1847 through 1850 but eventually brought most of them with him to San Bernardino in 1853 and then moved again to Utah in 1857. Each of those major disruptions came when he had settled and was doing very well financially; he chose each time to respond to what he knew the Lord required of him. He even succeeded in acquiring some gold in "Mormon Island" near Sutter's Fort, but still moved on instead of dedicating more time to acquiring the easy pickings in those earlier years of the gold rush.