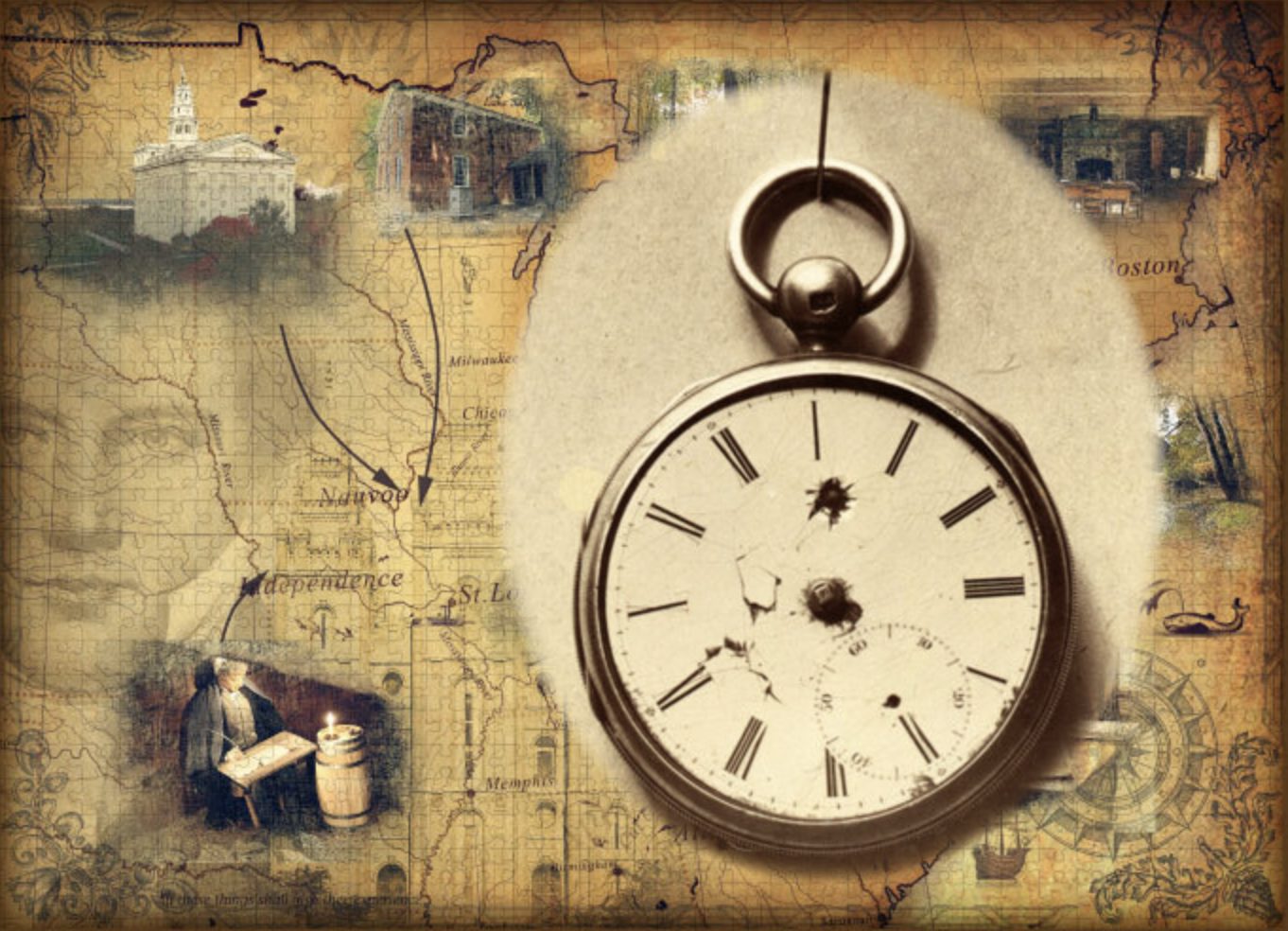 The following is the fourth in a series of articles giving greater detail from the stories behind the hidden things in our recently released Treasures of the Restoration jigsaw puzzle. If you haven’t gotten yours yet, BUY IT HERE.

If you have, bookmark or print this page so you can hang on to the story to share with your family as you come upon John Taylor’s pocket watch when you do the puzzle. The cover art for this article can help you know what it might look like. Read the third article in the series HERE.

Something I have always found difficult to grapple with is the fact that some people are miraculously spared in potentially fatal situations, while others are not. Recently, there was an article here on Meridian about experiences people have had with guardian angels where a family found their car blocked in on the train tracks with a train fast approaching. They all fled the car, but their child that was in a car seat was difficult to free from the vehicle. Ultimately, they got her out of the car, but not out of the car seat.

They watched in horror as the train collided with the car and the car seat flew into the air.

“As I was trying to get my senses back,” recorded David Curneal, “I saw my daughter’s car seat flying through the air. Over and over it tumbled as it gained altitude, almost spinning! All of a sudden, the very violent way it was traveling slowed to a level glide and it landed gently on the pavement. It was like someone caught the flipping babe and delivered her safely to the earth.”

It was a miracle. It was an event that defied the laws of physics to spare the life of a child in danger, because that child had purposes not yet fulfilled on this earth. Perhaps scientists conducting experiments—attempting to recreate such an event would conclude it was impossible. How could the centripetal force spinning that car seat be interrupted? How could something of that weight coming towards the earth possibly stay at a level glide? But determining that a particular event seems scientifically improbable, does not mean that it didn’t happen.

When a murderous, angry mob, their faces painted black, stormed the Carthage Jail, hell-bent on bloodshed, the probable outcome for the four men inside was almost certain death. They had one revolver between them and a door that not only wouldn’t lock, but had no latch to stay closed, even for a moment.

When John Taylor saw the frenzied crowd of men rounding the corner outside the window, he ran to block the door and found Hyrum Smith and Willard Richards already there in the same attempt. When a ball was shot through the keyhole of the door (the mob on the other side likely believed the door was locked), the men sprang back from it, but the second shot that came through struck Hyrum in the face, just as a shot from the window struck him in the back. As he fell, he exclaimed, “I am a dead man”.[i]

John Taylor said, “I shall never forget the deep feeling of sympathy and regard manifested in the countenance of Brother Joseph as he drew nigh to Hyrum, and, leaning over him, exclaimed, ‘Oh! my poor, dear brother Hyrum!’”[ii]

But Joseph did not have time to grieve, as enemies closed in from all directions. “[Joseph], however, instantly arose,” records Taylor, “and with a firm, quick step, and a determined expression of countenance, approached the door, and pulling the six-shooter left by Brother [Cyrus H.] Wheelock from his pocket, opened the door slightly, and snapped the pistol six successive times; only three of the barrels, however, were discharged.”

The shooting caused the crowd on the stairs to draw back and hesitate, but not for long. They pushed harder and ultimately were able to get the muzzles of their guns even further into the room until, “the whole entrance at the door was literally crowded with muskets and rifles.”  John Taylor recorded:

After parrying the guns for some time, which now protruded thicker and farther into the room, and seeing no hope of escape or protection there, as we were now unarmed, it occurred to me that we might have some friends outside, and that there might be some chance of escape in that direction, but here there seemed to be none. As I expected them every moment to rush into the room—nothing but extreme cowardice having thus far kept them out—as the tumult and pressure increased, without any other hope, I made a spring for the window…

As I reached the window, and was on the point of leaping out, I was struck by a ball from the door about midway of my thigh, which struck the bone, and flattened out almost to the size of a quarter of a dollar, and then passed on through the fleshy part to within about half an inch of the outside. I think some prominent nerve must have been severed or injured for, as soon as the ball struck me, I fell like a bird when shot, or an ox when struck by a butcher, and lost entirely and instantaneously all power of action or locomotion. I fell upon the window-sill, and cried out, ‘I am shot!’ Not possessing any power to move, I felt myself falling outside of the window, but immediately I fell inside, from some, at that time, unknown cause.[iii]

Upon hitting the ground, John Taylor found himself able to move again, he got under the bed for shelter, but was struck three more times on the way. It wasn’t until later that he was able to investigate what that “unknown cause” that kept him from falling out the window and saved his life might have been.

While recovering from his wounds in a nearby hotel, John Taylor sent his pocket watch and wallet with Willard Richards to be taken to his family for safekeeping. Brother Taylor’s family was surprised when they saw the watch:

My family . . . were not a little startled to find that my watch had been struck with a ball. I sent for my vest, and, upon examination, it was found that there was a cut, as if with a knife, in the vest pocket which had contained my watch. In the pocket the fragments of the glass were found literally ground to powder. It then occurred to me that a ball had struck me at the time I felt myself falling out of the window, and that it was this force that threw me inside. I had often remarked to Mrs. Taylor the singular fact of finding myself inside the room, when I felt a moment before, after being shot, that I was falling out, and I never could account for it until then; but here the thing was fully elucidated, and was rendered plain to my mind. I was indeed falling out, when some villain aimed at my heart. The ball struck my watch, and forced me back; if I had fallen out I should assuredly have been killed, if not by the fall, by those around, and this ball, intended to dispatch me, was turned by an overruling Providence into a messenger of mercy, and saved my life. . . I felt that the Lord had preserved me by a special act of mercy; that my time had not yet come, and that I still had a work to perform upon the earth.[iv]

John Taylor was wounded and falling, most likely to his death, but believed that a shot aimed at taking his life, saved his life instead. It was, in his estimation, “a special act of mercy” from the Lord and felt keenly the responsibility of the work he was spared to do.

As we already know, Brother Joseph’s time had come. When John Taylor rolled under the bed to protect himself, Joseph too made an attempt to escape from the window and was struck by two musket balls from the door and one from outside. He fell outward and after exclaiming “Oh Lord, my God,” he fell and his mortal ministry was ended. He “sealed his mission and his works with his own blood” (D&C 135:3).

John Taylor went on to serve multiple missions in Europe and the eastern United States and served as president of the Church for seven years.

Because there was comparatively little damage to John Taylor’s watch, some have wondered whether it could really have been hit by a ball shot from a musket. Hyrum Smith’s watch, too, was struck by a ball that had already passed through his body and the watch was almost unrecognizable afterwards. According to Willard Richards’ firsthand account about Hyrum:

“From the holes in his vest…pantaloons, drawers, and shirt, it appears evident that a ball must have been thrown from without, through the window, which entered his back on the right side, and passing through, lodged against his watch, which was in his right vest pocket, completely pulverizing the crystal and face, tearing off the hands and mashing the whole body of the watch.”[v]

To confirm the plausibility of the theory that John Taylor’s watch really was shot, Joseph L. Lyon, a medical professor at the University of Utah, even conducted tests shooting at different pocket watches of similar styles and materials with muskets of comparable power at a variety of distances and concluded it highly unlikely that the watch could have been shot and still remained in the remarkable condition it is in.

This is one of great difficulties of studying and understanding a history full of miraculous accounts and occurrences. We study the past with whatever tools we can; by reading firsthand accounts, analyzing physical evidence, recreating scenarios, trying our best to understand. But miracles, by their very nature, are a departure from the expected, repeatable series of events, so how are we to prove whether they could really have happened the way someone believed that they happened?

Ultimately, we do the best we can. And it’s a course of study that requires faith and discernment, not just data and dissertations. And whether it was a musket ball stopped by a pocket watch or a shove from the hand of a guarding angel—two prophets stood at the same window, a window that would ultimately act for them as a threshold to the next life. One stepped through becoming a martyr in this life and continuing his ministry in the next, and the other was pushed back because he had more to do. So, as you search for John Taylor’s pocket watch in the Treasures of the Restoration jigsaw puzzle, let it be a reminder of time. The Lord will give us enough of it. He has a work for you to accomplish and you will be protected, as you stay close to Him, until it is finished.