Hidden Things: Are We Looking for the Wrong Kind of Loaves and Fishes from the Lord? | Meridian Magazine 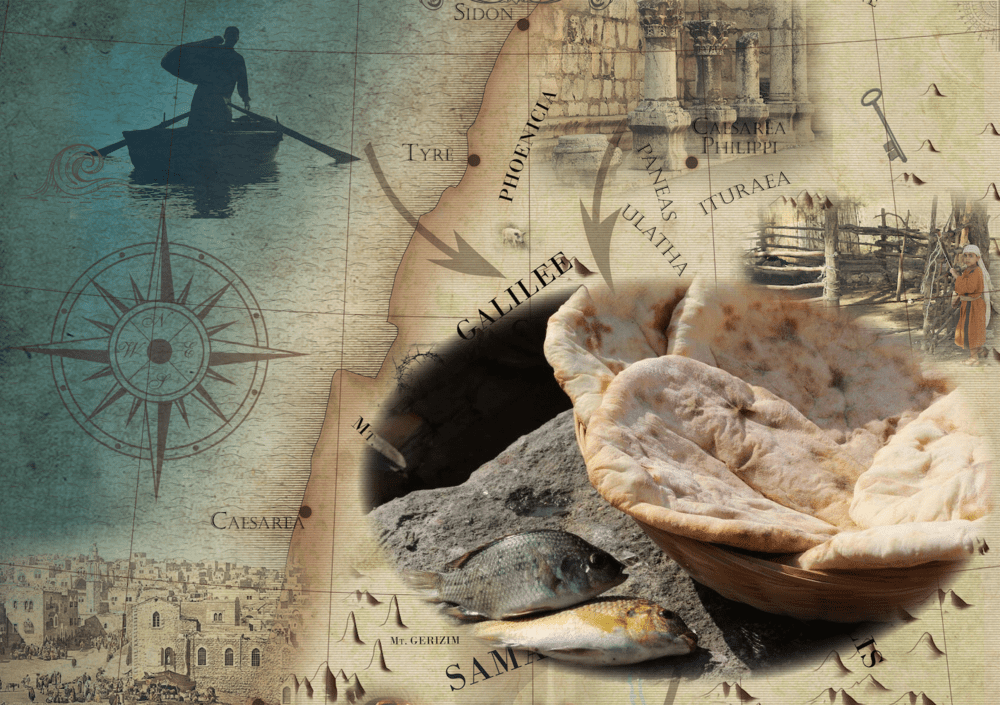 Hidden Things: Are We Looking for the Wrong Kind of Loaves and Fishes from the Lord?

The following is the second in a series of articles giving greater detail from the stories behind the hidden things in our recently released Treasures from the Life of Jesus jigsaw puzzle. If you haven’t gotten yours yet, BUY IT HERE.

If you already have yours, bookmark or print this page so you can hang on to the story to share with your family as you come upon the hidden image when you do the puzzle. Read the first article in the series HERE.

What does the story of the loaves and the fishes mean to us? Most of us are quick to think of times when the Lord has multiplied something that didn’t seem like enough to be sufficient for our needs—whether that was actually enough food at a campout with unexpected attendees or enough energy when you felt you had no more to give, or enough money to pay for your needs when you were coming up short.

I remember as a child joining my friend’s family on a vacation to Lake Powell. The sunsets there were beautiful and following in the footsteps of my dad, I wanted so much to get great pictures of them. One night in particular, the sun turned the sky a deep pink and as I held up my little digital point and shoot to capture the moment, the screen read “battery exhausted” with a descending melody of electronic notes that sounded like failure. The sky would only look like that a little longer and I just wanted to battery to give me another minute or two so badly. I said a quick prayer asking the Lord to give my battery a little more juice and when I pressed the on button once more, the camera sprang to life and gave me the chance at 4-5 more shots.

I don’t remember or have the resulting pictures anymore, but I never forgot the answer the prayer and the Lord’s ability to make my dying battery last just a little bit longer.

But the Lord’s ability to make five barley loaves and two small fishes sufficient to feed a multitude (it says 5000 men, which means with women and children, it was probably more like 20,000) is not the only lesson to be learned from this New Testament miracle.

Add this puzzle to your Easter celebrations.

You may not remember that at the time that this hungry crowd was following Jesus, He had just learned of the gruesome death of John the Baptist. After receiving this news, Jesus departed “into a desert place apart” (Matt. 14:13) ostensibly to process his grief alone. But He wouldn’t get the chance, as the people heard of His whereabouts and followed Him by foot out of the cities.

When Jesus saw the great multitude, He was “moved with compassion toward them, and he healed their sick” (Matt 14:14).

As the day wore on, Christ’s disciples said that it was time to send the multitude away that they might get themselves something to eat. This moment is vividly in my mind because I was one of the extras in the Church’s Bible video of the feeding of the 5000. It was an extremely hot day in the wilderness of Utah and everyone was dressed in layers of the garb of ancient Israel. People began to faint for want of shade and water and though underneath they were just modern people in costumes with paramedics and water bottles standing by, it seemed like we were back in time—a crowd truly in need of saving sustenance in a desert wasteland.

It was Jesus’ chance to finally be alone, but he told his disciples that the crowd need not be sent away, but that they could make do with the food they had—five loaves and two fishes.

Jesus looked up to heaven and gave thanks before blessing and breaking the tiny offering. The pieces were distributed among the crowd and when all had eaten their fill, twelve baskets of the fragments remained (Matthew 14:20).

It was a miracle, clear to everyone there, but it’s what happened after this that I want you to remember.

The next day the people looked again for Jesus—both those that had actually been there and were fed, and those that only heard about it. It was not unlike a time after a large buffet meal that I leaned back in my chair and said, “ugh, I’m so full, I’ll never eat again” and my dad’s swift response was, “I have a friendly wager…you will.”

Of course, I have eaten again and again and likewise, these people that were filled the day before now came back hungry.

“Ye seek me, not because ye saw the miracles,” said Jesus, “but because ye did eat of the loaves, and were filled” (John 6:26).

Elder Jeffrey R. Holland sums up the exchange this way:

During the Savior’s Galilean ministry, He chided those who had heard of Him feeding the 5,000 with only five barley loaves and two fishes, and now flocked to Him expecting a free lunch. That food, important as it was, was incidental to the real nourishment He was trying to give them.

“Your fathers did eat manna in the wilderness, and are dead,” He admonished them. “I am the living bread which came down from heaven: if any man eat of this bread, he shall live for ever.”

But this was not the meal they had come for, and the record says, “From that time many of his disciples went back, and walked no more with him.”[1]

Such fair-weather friends it seems, to have witnessed such a miracle and then to turn and walk away when the miracle didn’t continue to take the form they understood; to walk away seeking somewhere else to fill their bellies, ignoring the aching hunger of their spirits.

In that little story is something of the danger in our day. It is that in our contemporary success and sophistication we too may walk away from the vitally crucial bread of eternal life; we may actually choose to be spiritually malnourished, willfully indulging in a kind of spiritual anorexia. Like those childish Galileans of old, we may turn up our noses when divine sustenance is placed before us. Of course the tragedy then as now is that one day, as the Lord Himself has said, “In an hour when ye think not the summer shall be past, and the harvest ended,” and we will find that our “souls [are] not saved.”

So, what are the loaves and fishes that we are fixating on, while completely missing the bread of life?

Perhaps you look back to certain miracles from the past and feel cheated that you aren’t seeing those same kinds of miracles anymore. Perhaps rather than reflecting in gratitude on past answers to prayer, those earlier versions of yourself mock you because the prayer in your heart now seems to go unanswered and you don’t know why.

Because that child that I was, was given the loaf of a little more battery power to take a sunset picture, I cannot just believe that I need never pack batteries again. Because the Lord isn’t in the business of batteries, He’s in the business of consecrating lives and transforming our souls.

I’m afraid I see a little too much of myself in those disciples that came for the food and walked away when it was going to be strictly spiritual food.

Help your kids learn more about Jesus with this activity for the whole family.

A few years ago, I directed a short film and on the day that we were meant to shoot a particular sequence, it began to rain. Ironically, it was meant to be raining in the scene, but I had planned on rain that I could control and from which I could protect the expensive equipment. So much had gone into finding a day that would work for everyone to shoot this scene and watching the rain pour down from heavily laden clouds just felt like the Lord didn’t care about my project at all. I sat on an overstuffed chair and cried.

It was in the midst of those tears that I realized that perhaps I was believing myself entitled to miracles-on-demand from the Lord. Not looking to Him in gratitude that we’d pulled off so much already or that I’d had so much help from so many talented people. I was looking to be provided with the intercession of heavenly help in temporal matters while being satisfied to go without it in my spiritual life.

But thankfully, my story didn’t have to end there. It wasn’t Jesus that walked away from those disciples, it was them that departed hence from Him. Just like he looked on the original multitude, despite intending to be alone, and had compassion on them and stayed with them, He has compassion on us and will be there when we come to our senses and begin to crave the bread that only He can give; the life that he bought us with his blood.

So, when you find the loaves and fishes in our Treasures from the Life of Jesus jigsaw puzzle, be grateful for the abundance that the Lord is capable of showing forth in our lives, but also remember not to be the disciples that walked away when they couldn’t come back for seconds. Seek the Bread of the Life when the rolls run out, for it is only through Him that we can be filled and never hunger again.

Thank you for your wonderful insights. This is so well thought--out and expressed. I couldn't agree more about the importance of making sure we love the Savior not only because He can make us more comfortable and happy physically and temporally, but more importantly because of the love and power He has to bring us spiritual joy regardless of our physical or temporal contentment or discomfort.

This article reminded me of a lesson I have learnt from the COVID legislation changes to how we run church activities and classes around food. It became clear to me what an opportunity we had to focus on the true bread of life in our activity, instruction and classes. I noted the stress that some leaders felt when they couldn't pad out an activity or lesson with food. They didn't know how to connect, inspire and validate those in their care without food. My thought was, how wonderful. This situation will provide an opportunity of growth. However, that hope was short-lived when methods were used to try and re-introduce food into activity and classes as quick as possible. I look forward to the day when we can come together and be satisfied with the true Bread of Life and Living Water.